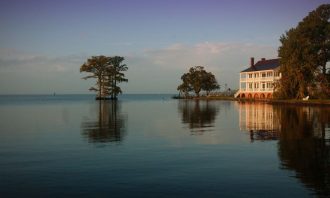 State officials are urging people to avoid contact with potentially harmful algal blooms that have developed in the Edenton Bay in Chowan County due to recent hot weather.

The Division of Water Resources’ Washington Regional Office staff has been monitoring small blooms in the area since late June. The bloom has now concentrated in Edenton Bay.

Algal blooms are often driven by wave and wind action, which concentrates them into coves and along shorelines.

The algae have been identified as Dolichospermum planctonicum, a filamentous blue-green alga that may produce cyanotoxins. These blooms are commonly referred to as potentially harmful algal blooms, and may cause illness in humans or pets.

North Carolina has had no reports of adverse health effects in people associated with this algal bloom.

While it is safe to boat or fish in the affected areas, the N.C. Division of Public Health encourages the public to avoid contact with large accumulations of the algae and prevent children and pets from swimming or ingesting water in an algal bloom.

• Keep children and pets away from water that appears bright green, discolored or scummy. Do not handle or touch large mats of algae.
• Avoid handling, cooking or eating dead fish that may be present.
• If you come into contact with an algal bloom, wash thoroughly. Also, use clean water to rinse off pets that may have come into contact with an algal bloom.
• If your child appears ill after being in water containing an algal bloom, seek medical care immediately.
• If your pet appears to stumble, stagger or collapse after being in a pond, lake or river, seek veterinary care immediately.

For more information on the potential health effects from algal blooms, visit the N.C. Division of Public Health’s website at http://epi.publichealth.nc.gov/oee/algae/protect.html.

To learn more about algae, visit the state environmental agency’s website at https://deq.nc.gov/about/divisions/water-resources/water-resources-data/water-sciences-home-page/ecosystems-branch/algal-blooms.