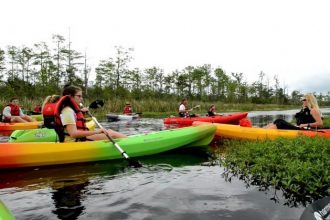 A new report from the state shows visitor spending in North Carolina set a record of $21.9 billion in 2015, while Dare County eclipsed the $1 billion mark for a second straight year.

Dare County had the fourth-highest total for spending at $1.05 billion last year, trailing only the three main metropolitan counties of Mecklenburg, Wake and Guilford.

Visitor spending in Dare went up 3.3 percent from 2014, the same average statewide. Currituck grew by 1.9 percent and Hyde increased 1.1 percent.

Visit North Carolina, a unit of the Economic Development Partnership of N.C., said domestic visitor spending also increased in 91 of the state’s 100 counties.

Pasquotank County had the state’s ninth-highest increase of 4.4 percent to $59.5 million. Perquimans was the only local county to see a decrease, dropping 2 percent to $9.8 million.

Local tax collections in Dare topped $47 million, growing by 4.2 percent from 2014, and were the third most of any county.

In addition, visitor expenditures directly supported 211,487 jobs and generated nearly $5.3 billion in payroll income across North Carolina, according to the report.

The visitor spending totals come from an annual study commissioned by Visit North Carolina and conducted by the U.S. Travel Association.

The study uses sales and tax revenue data, employment figures and other industry and economic data to determine the overall impact of visitor spending in North Carolina.

Last week, new data showed visitation at the state’s natural and cultural sites for Fiscal Year 2015-16 that ended June 30 was up 7.7 percent compared to the previous year.

In addition, the 11.7 million visitors to the North Carolina State Parks system through the end of July is a 10 percent increase over midsummer visitation in 2015, the state said.

Total state parks visitation in 2015 was a record 17.3 million. If the trend continues through the end of 2016, that record is likely to be surpassed.