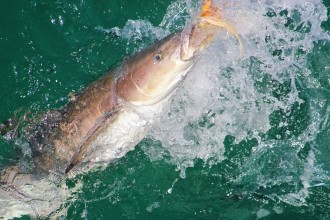 Regulators have agreed to recommend changes to cobia limits in federal waters for next year that may prevent another near-debacle like this past summer in management of the popular fish.

If approved by the U.S. Secretary of Commerce, the new regulations from the South Atlantic Fishery Management Council developed at their meeting last week in Myrtle Beach would be implemented in 2017 in waters beyond three miles from shore from Georgia to New York.

According to a news release from SAFMC, the changes are designed to help extend the season for recreational and commercial fishermen and help ensure stable fishing opportunities for the migratory stock.

Advocates for anglers and charter captains expressed satisfaction with the compromise but cautioned that there may be other restrictions adopted by individual states.

“The regulations for cobia in federal waters that were passed 7-to-6 last week at the SAFMC meeting were a direct result of the fishing community’s engagement in fisheries management,” said Southern Shores resident Billy Gorham, who owns Bowed Up Lures.

The SAFMC recommended that the recreational bag limit be cut to one fish per person, per day, with a vessel limit of six, and the recreational minimum size limit increased to 36 inches measured from the tip of the mouth to where the tail begins to split, known as the fork length.

A commercial trip limit of two fish per person per day, with no more than six fish per vessel per day, whichever is more restrictive, would also be established.

“We’ve worked diligently, looking at various combinations of changes to bag limits, vessel limits and size limits, to help maximize fishing opportunities and to have new regulations in place in time for next year’s season,” said SAFMC Chairperson Michelle Duval, a staff member with the N.C. Division of Marine Fisheries representing the state on a variety of management councils at the federal level.

Gorham said Virginia’s Marine Resources Commission played a big role in uniting with North Carolina fishermen on the plan, and that it also allows the states to set limits more in line with their peak seasons.

“A major part in raising the minimum length to 36 inches was to give cobia another year to spawn,” Gorham said. “This is important because of what we have felt was a flawed stock assessment that claims cobia may become overfished. Adding an additional year should greatly help.”

The recreational fishery for Atlantic cobia in federal waters closed on June 20 during the peak cobia season off the Outer Banks and Virginia, where a majority of landings occur during the summer.

That affected private anglers and charter captains targeting the species offshore, and rankled politicians at the state and federal levels.

North Carolina’s Marine Fisheries Commission decided to delay a full closure in state waters until Sept. 30 this year, and put in place a labyrinth of policies for the species.

They increased the recreational minimum for cobia in state waters to 37 inches, fork length.

And a series of complicated rules were added that included how the fish are caught, determining how many can be kept and what day fisherman can keep them.

Federal regulators said the early closure for 2016 was required because the recreational annual catch limit had been exceeded in 2015. Current measures call for a shortened season the subsequent year.

Public hearings were held in recent months up and down the southeast coast. Proponents of keeping the fishery opened questioned the science behind the rules and laid out the economic fallout.

“Overall, this effort started over six month ago, took attending over two dozen meetings from Cocoa Beach to Washington D.C., dozens of e-mails, hours of research, which included over 4,000 pages of documents,” Gorham said.

“It is vital to give credit to the local community, the charter fleet from Hatteras, Oregon Inlet, Pirates Cove, Wanchese, pier anglers in North Carolina and recreational and for-hire captains in Virginia.”

Gorham also said donations by local fishing legend Larry Gary were key in allowing a number of supporters to make it to the meetings up and down the coast.

“As many fish has he has landed, he could have called it quits, but he didn’t and has stepped up to ensure this generation and the next can have fair and equal access to the resource,” Gorham said.

The council is also working with the Atlantic States Marine Fisheries Commission to develop a complementary plan to allow additional management flexibility, according to the news release.

Gorham said all the effort put into protecting the cobia fishery was about more than just being able to catch the fish best known for its strong fight and tasty meat.

“Many people travel here just to cobia fish in early spring via boat and mid- to late summer from the piers,” Gorham said. “I’ve spent more time on this than my master’s degree, and the biggest thank you I get is seeing younger generations catching their first cobia after the June 20th closure date.

“The fight is not over, and we hope those who did not get as involved see how being part of the process, even if it is just assisting in travel costs, benefits all.”