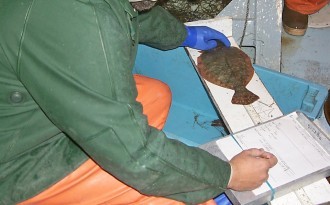 The injunction will allow both commercial and recreational fisherman to keep flounder through the end of the year. (file photo)

During its November 2015 meeting at Jeanette’s Pier, the commission voted 6-3 to shut down both the commercial and recreational fisheries for southern flounder during the fourth quarter of 2016.

A lawsuit was filed by the New Bern-based North Carolina Fisheries Association, the Carteret County Fishermen’s Association, as well as Dare, Hyde and Carteret counties, against the commission’s action, and resulted in a temporary restraining order being issued on Sept. 28.

After two hours of testimony on Oct. 6 from attorneys representing the NCFA and the state, Superior Court Judge John Jolly, Jr. issued an order preventing the Division of Marine Fisheries from instituting the October 16 closure.

When the MFC voted for the closure last year, interest groups from the commercial fishing industry, which were opposed to the ban, lined up against the recreation-oriented Coastal Conservation Association and Recreational Fishing Alliance.

The 6-3 vote pitted the three recreational, two at-large, and one MFC member representing the scientific community against the three members holding commercial seats on the commission.

CCA and RFA actually came into the meeting advocating that restrictions be imposed on the commercial fishery only, but both groups eventually took a public stance accepting the closure of the entire fishery.

Also included in the commission’s supplement the size limit for all flounder caught inshore changed to 15-inches, a number of gear and net restrictions were placed on the commercial side, and summer flounder were added to the 10-week recreational ban.

The size and gear changes in the rule changes were not affected by the injunction.

While a press release from the NCFA indicated a positive reaction to the ruling, the organization noted that appeals could reverse the injunction.

The NCFA said a final hearing and subsequent appeals are still in the offing and that the issue is far from settled.