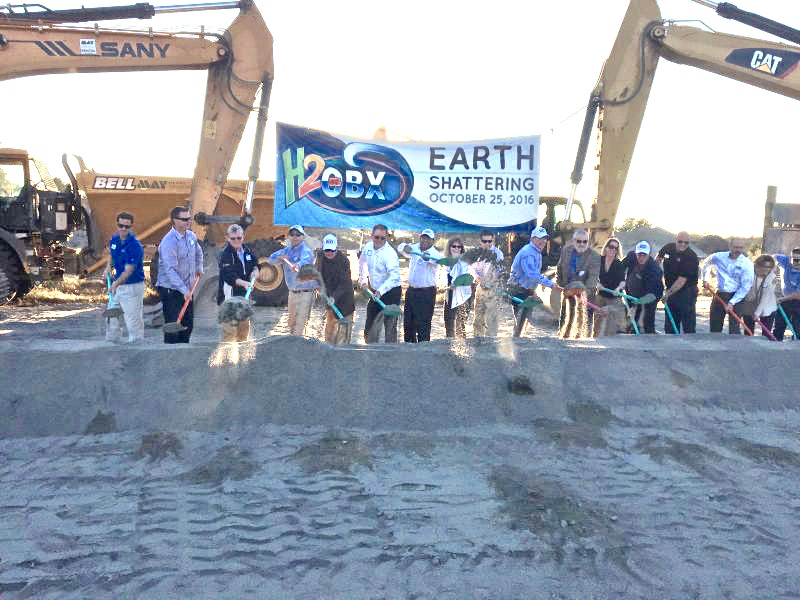 Excitement was the one word many in attendance at the groundbreaking for H2OBX expressed Tuesday about the waterpark coming to the area.

“Since the recession of 2008, lower Currituck County has really struggled. It seemed like everything packed up and went away, while Moyock continued to thrive,” Currituck County Commissoner Paul O’Neal said.

“It’s like a tale of two cities. We’ve now got a new city coming in lower Currituck.”

The potential for growth related to the waterpark, directly and indirectly, was touted repeatedly.

“It’s going to be a huge business for us and a great job provider,” said Currituck Chamber of Commerce Executive Director Josh Bass.

“But it’s also going to pull a lot of people back across the bridge. It’s going to help our restaurants, our golf courses, retail shops. It’s going to be a fantastic opportunity for the lower end of our county.”

A total of 19 real estate companies have already signed on to be partners with H2OBX Waterpark, which will give them the opportunity to offer guests direct access to the park as part of their vacation rental packages.

“It’s going to be another draw to vacation on the Outer Banks, not only for their summer vacation, but also long weekend stays,” said Ali Breaux, president of Sun Realty.

The sentiment repeated throughout the event was that while the beaches are the biggest attraction to the Outer Banks for visitors, the waterpark will be available when the ocean and weather doesn’t cooperate.

“You get the red flag days, or maybe its overcast and people don’t want to be at the beach. From what I just saw this is just going to be a wonderful attraction,” said Elan Vacations President and CEO Norman Bibeau.

While the vacation rental companies will influence how many guests access the park, it will also be open to the general public, including locals, although full details about ticketing and prices have not been released.

Site prep has already begun on the 80-acre parcel, which Ellis said won’t take as long as some would think, and they are on schedule for the park to open next May.

“When you come by the site in April, you’ll think we’re still crazy (about being open by Memorial Day),” Ellis said. “A lot of everything is underground. All the pools, the piping, that takes the longest to build.”

Since it’s not traditional construction, crews can work on clearing and digging in one area, while the specialty concrete work will already be under way in another, and the buildings will be going up somewhere else, according to Ellis.

“In the last two months, is when it all will come together,” Ellis said.

Tuesday’s event was coordinated by Cori Riddle of Bizport, which is handling the local marketing of the waterpark slated to open next spring, and involved a number of local vendors.

Camp Cocktail provided bar service from their vintage travel trailer with one-of-a-kind selections that have garnered national acclaim, including beer from the Weeping Radish and wines from Sanctuary Vineyards.

Jessie and Michelle Fernandez played musical selections throughout the event.

Renee Landry Events handled the design and theme of the decorations and florals, and Outer Banks Embroidery provided custom golf shirts, hats, tote bags and towels with the park’s logo.

The Currituck County High School swim team provided assistance with parking, handing out information and items, and a few members were dressed in vintage swim gear for photos with guests.