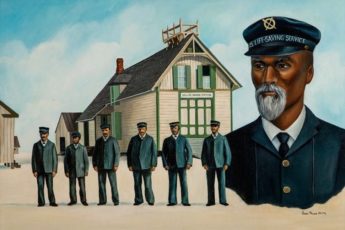 This painting by James Melvin depicts Richard Etheridge and the Pea Island Crew.

The North Carolina Aquarium on Roanoke Island will host a community celebration to honor Richard Etheridge and his crew members, who comprised the first all-black station in the Lifesaving Service, at 1 p.m. Saturday, Nov. 5.

The burial site of Etheridge (1842 – 1900) and his family was rediscovered 40 years ago during the construction of the Aquarium on Roanoke Island. After being restored to public view, the site became a touchstone in the history of the Outer Banks.

Etheridge and his crew manned the lifesaving station on Pea Island. The high point of the crew’s service was the night-time rescue of the crew of the E.S. Newman during an 1896 hurricane. A hundred years later, the U.S. Coast Guard recognized that act with a posthumous Gold Lifesaving Medal.

After more than a year of researching and updating the interpretation at the gravesite, making it easier for visitors to access and appreciate it, the Aquarium will unveil the redesigned site and mark the 120th anniversary of the Newman rescue with a rededication ceremony.

Speakers will include Rear Adm. Stephen Rochon USCG (Ret.), who spearheaded the posthumous award of the Gold Lifesaving Medal to Richard Etheridge and his crew for the E.S. Newman rescue; Virginia Tillett, former member of the Dare County Board of Commissioners and Board of Education; and Darrell Collins, U.S. National Park Service historian at the Wright Brothers National Memorial. The U.S. Coast Guard Color Guard will present the colors.

The ceremony will be held outside the front entrance of the Aquarium. Following the ceremony, members of the Pea Island Preservation Society will be available in the Aquarium’s Neptune’s Theater. Aquarium guests are encouraged to stop by until 3 p.m. and find out more about this important part of coastal North Carolina History.

In conjunction with the event, the Pea Island Cookhouse Museum on Sir Walter Raleigh Street in Manteo will open its doors to the public from 5 to 6:30 p.m. on Friday, Nov 4.