Retro Wright Visitor Center getting back to its old self 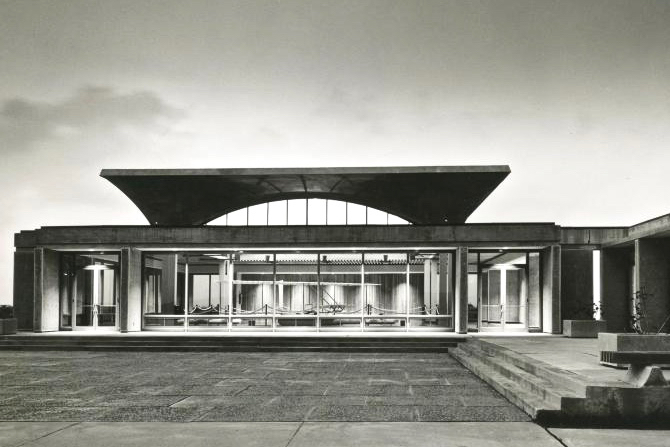 For the next 18 months or so, visitors at Wright Brothers National Memorial will have to mostly content themselves with strolling the grounds where flight began while the 56-year-old Visitor Center and its exhibits are being rehabilitated.

After plans to replace the building were unexpectedly scuttled in 2002 and subsequent restoration funds never materialized, the center will now finally be restored to its original condition — orange trim, concrete and all.

Separately, a new exhibit plan will be designed to freshen up displays of Wright brothers’ artifacts. In the meantime, a temporary double-wide trailer will house a bookstore and a scaled-down exhibit area.

The annual Dec. 17 ceremony marking the anniversary of the Wrights’ momentous first flight at the site in 1903 will still be held, said project manager Frank Hester, engineering technician with the National Park Service Outer Banks Group.

“They’re still doing a program, and they’re working on having some kind of shelter at the approximate location of the old pavilion site,” he said.

It might surprise Outer Banks’ locals who regard the building as an outdated eyesore that it is not only a National Historic Landmark; it is also considered a stellar example of the National Park Service’s “Mission 66” architecture. But it has lost its retro glamour over the years, thanks to questionable “improvements” and a persistently leaking roof.

In the process, he said, the heating and air units, the electrical and plumbing systems and the roof will be replaced. Windows will be returned to the clearer glass and longer frame they had originally. Walkways, handrails, floor coverings and restrooms will be replaced. All of the upgrades will be done to the highest level of “green” LEED-certification that is possible.

The reproductions of the Wright brothers’ 1903 Flyer and the glider were removed in October from the center’s flight room, Hallac said, and artifacts that had been displayed in an exhibit area have been sent to storage. The Flyer has been loaned to the North Carolina Museum of History in Raleigh for the duration of the project. It joins a reproduction of the 1911 Wright glider exhibited in the museum lobby. The glider is being restored at the agency’s Harpers Ferry facility before being sent to the museum.

All 69 portraits of notable aviators that lined the flight room walls surrounding the Flyer reproduction have also been removed. The Paul E. Garber First Flight Shrine portrait gallery honors people who have achieved aviation “firsts.” Portraits of a new inductee are unveiled every Dec. 17.

Hester said that a pre-construction meeting is scheduled next week with Kinston-based contractor Group III MGT Inc., which is expected to complete the $5.8 million rehabilitation project by fall, weather permitting. An additional $1.5 million contract for the exhibit design will be awarded in the near future. Completion of the entire rehabilitation and upgrade is targeted for the summer of 2018.

Even with the visitor center closed, there’s still plenty to enjoy at the park. The original flights are marked by boulders on the grounds between the Wright Monument and the visitor center. There’s also the reproductions of the 1903 camp buildings, and the life-sized sculpture recreating the scene as eyewitnesses watched the Wrights take their first flight, inspired by John Daniels’ famous photograph.

Hester said that the $7 entrance fee for adults over age 16 will remain, partly because of cumbersome federal bureaucracy. Plus, the park will be still be offering limited exhibits and a book/gift shop in the trailer, and outdoor programming under a temporary shelter will be added when possible. Staff informs visitors about the project at the entrance booth, he said.

It’s not the first time visitors will have to cram into a temporary trailer to look at exhibits. In 2002, the visitor center was closed for roof repairs, and a similar double-wide was provided. A much larger $1.8 million visitors’ pavilion was put in place before the 2003 centennial, but it has since been removed.

Restoration of the 1960 building has been a bumpy ride, especially after its designation in Jan. 2001 as a National Historic Landmark. As one of the first Mission 66 visitor centers in the park service, the Wright Brothers’ center was recognized for being an important example of the Philadelphia School of modern architecture.

Mission 66 was a 10-year, mid-century program that changed the agency’s focus to the visitor experience and interpretation rather than commemoration. The ambitious national effort was initiated at Wright Brothers. Before the 50th anniversary of the first flight, 111 acres were added to the Wright park.

Notable architectural features of the original building, designed by architectural firm Mitchell/Giurgola, included a patterned concrete exterior wall, tidewater red cypress interior wall panels, a dome-like structure over the assembly area, a thin concrete shell roof and an open lobby space that flowed into the large flight room. All of the elements were meant to suggest free-flowing form, and the building’s design was met with national accolades.

“In theory and practice, the Wright Brothers Visitor Center was a balance between aesthetics and function,” said a park service history of the center.

By the mid-1990s, the modernist visitor center was defaced and tired-looking. The concrete wall, once lauded as public art, had been painted white. Metal sheets covered some cypress panels. Plywood filled in cypress boards on the entrance terrace. Open vistas were blocked by walls and furniture.

For about two years before the center was designated in 2001, the First Flight Centennial Foundation was planning to replace the by-then chronically leaking and patched-up building with a beautiful new $17 million center. The ad hoc state panel, created to plan the 100th anniversary of the Wright’s flight, was fund-raising with the goal of razing and replacing the old center.

The foundation had spent $250,000 of state funds on architectural plans for the new building, apparently unaware that the park service was at the same time seeking the historic landmark status, which would forbid its demolition.

After learning of the designation, foundation members angrily accused the park service of ambushing their efforts, a charge the agency denied. A follow-up $8 million plan to repair and expand the existing center was dropped because of lack of time before the 2003 celebration.

It took numerous attempts by different superintendents since then before the funds were finally found for the restoration, helped no doubt by attention on the 100th anniversary of the park service.

“We just feel exceptionally fortunate to have received the resources to make this important rehabilitation take place,” Hallac said.