Petition asks for limits on shrimping, size of spot and croaker 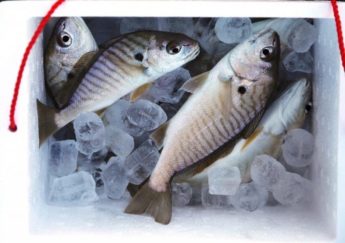 Spot are popular with anglers for their flavor and ease of catch.

A group has petitioned the N.C. Marine Fisheries Commission to designate coastal waters as a special nursery area that could restrict the shrimp fishery in the sounds and ocean and place size limits on two popular finfish starting in 2018.

Details of the petition were presented to the commission Thursday during its fall meeting at the Hilton Garden Inn in Kitty Hawk by Blakely Hildebrand of the Southern Environmental Law Center. The SELC is representing the N.C. Wildlife Federation, which crafted the petition.

The petition asks the commission to designate all coastal fishing waters not already marked as nursery areas as special secondary nursery areas, establish clear criteria for the opening of shrimp season and define the type of gear and how and when gear may be used in the special areas.

A map presented by Hildebrand showed essentially that the entire Atlantic coastline of North Carolina out to three nautical miles from shore, as well as the sounds and coastal rivers, would be designated as the special area. 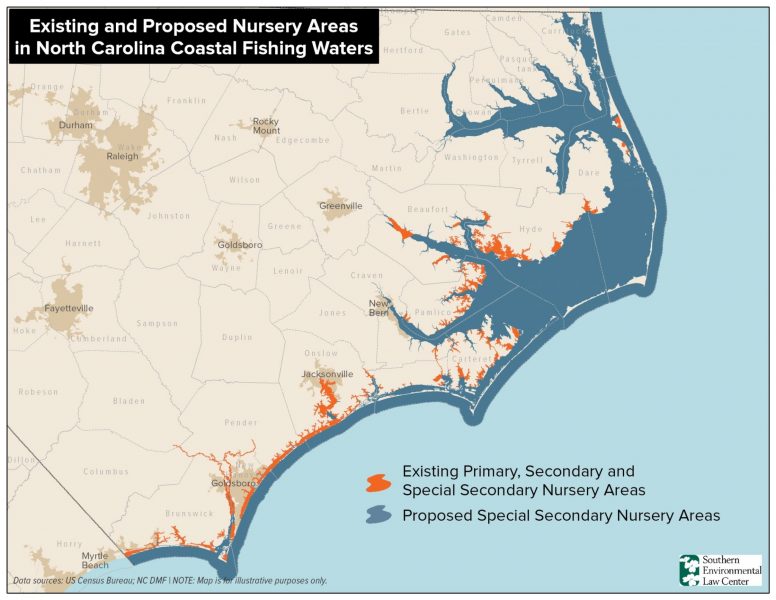 The proposal would reduce the size of the nets, called otter trawls, reduce the amount of time a net could be in the water to 45 minutes and allow shrimp trawling for just three days a week only during daylight hours.

It would also require two by-catch excluder devices on each net and change how the Division of Marine Fisheries determines when the shrimp season can open to a minimum of 60 shrimp per pound, which is determined by sampling of coastal waters by DMF staff.

The petition also seeks a size limit for recreational fishermen of 8 inches for spot and 10 inches for croaker.

Hildebrand said during her presentation that the main goal of the proposal is to reduce by-catch, especially juvenile spot, croaker and gray trout, that spawn in coastal and inshore waters and get caught and die in shrimp nets.

“It is estimated that for every pound of shrimp harvested in North Carolina waters, over four pounds of non-target catch, including juvenile finfish, are discarded,” the petition says

North Carolina is the only state on the East Coast that still allows shrimp trawling in sounds and rivers, and the N.C. Wildlife Federation says they are not asking for an outright ban.

“(T)his petition proposes a balanced approach of defining the type of gear and managing fishing in areas that are essential for juvenile finfish development,” the group said in the petition.

The federation is a statewide, nonprofit conservation organization established in 1945 and is the state affiliate of the National Wildlife Federation.

A general public comment period was held after the presentation, where a number of fishermen and others criticized the proposals, while representatives of the Coastal Conservation Association and N.C. Wildlife Federation spoke in favor.

David Bush, fisheries biologist for the North Carolina Fisheries Association, which advocates for commercial and recreational interests, noted that many measures are already in place that decrease by-catch. There have not been increases in fish after areas have been restricted or closed in other states, he said.

“It’s very easy for any scientist or analyst to say what they want data to say,” said Bush. “Every state is unique … we have inside trawling because we have the capability to support it without a substantial impact.”

David Sneed, executive director of the CCA North Carolina chapter, said the impact of size limits on anglers who fish for the two species from the shoreline and piers is outweighed by the need to help the stock.

“Fishermen are telling us they are seeing less and less croaker and spot, and so putting in a limit would be a benefit to them,” Sneed said.

Jerry Schill, president of the N.C. Fisheries Association, said using the petition process is the wrong way to go about making a change in size limits.

“They have every right to file a petition for rulemaking to limit shrimp trawling. We don’t agree with it, but they have that right,” Schill said.

“But to throw in size limits on those two species is absurd. Its a totally different issue.”

Schill said he doesn’t think the commission will go along with making a change to the spot and croaker limits this way becuase the state already has a process for making those rules.

Sammy Corbett, chairman of the Marine Fisheries Commission, noted before Hillbrandt’s presentation that the petition is not complete, and that it will not be discussed in depth until at least its February meeting in Wilmington.

Corbett said a number of required documents, including economic impact and other information, must still be gathered and added to the petition before its complete.

The petition will also face scrutiny at regional committee meetings, where the public will be allowed to comment, before it will come back to the full commission.