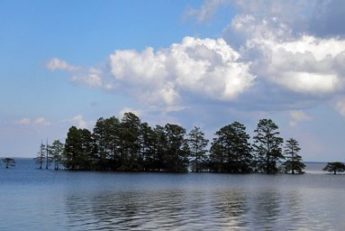 Mattamuskeet is the largest natural lake in N.C. (USFWS)

The Hyde County Commissioners have agreed to include $15,000 in the 2016-2017 budget toward work in restoring the ecological health of the Lake Mattamuskeet National Wildlife Refuge.

The commissioners approved the action after a second presentation in as many months by Pete Campbell, refuge manager.

Hyde County Manager Bill Rich said that until the new budget is in effect July 1, the county will look for grants to supplement the budget appropriation.

Campbell did not provide an estimate of the total needed to restore the lake, which is the largest natural lake in the state, to health.

Stakeholders in a healthy lake include area farmers, residents, the state and federal governments.

“I want everyone to have input into or it’s not going to work,” he said about the effort.

He said there will be a public meeting on the state of the lake Nov. 29 at Mattamuskeet High School.

In addition, Campbell said at the recent commissioners meeting that he is working with the North Carolina Department of Transportation on repairs needed to Route 94 that goes across the lake.

He said he wants to submit a grant from the federal highways department for a large grant to armor the road. A first estimate he received to repair the road is $4 million, for which the repairs could be done in stages and paid for the same way.

Last month, Campbell asked the commissioners to take the lead in restoring the ecological health to the largest natural lake in the state.

The federally-owned refuge is a mainland Hyde County tourist attraction and a winter haven for hundreds of thousands of waterfowl.

The lake, which is 18 miles long and seven miles at its widest, has lost almost all sub-aquatic vegetation, Campbell said at the Oct. 3 Hyde County Board of Commissioners meeting.

In a presentation to the commissioners, refuge biologist Michelle Moorman said that due to its poor water quality, the lake is about to be listed as an “impaired water” by the EPA, a designation that is of serious concern.

A large die-off of SAV began in 1991 starting with the west side of the lake and again in 2013 when the much larger east side began to be affected.

Reasons for the dying vegetation are complex, but a major cause is a loss of water clarity is due to an increase in nutrients, nitrogen and phosphorus, fluctuating high water levels from heavy rains the last few year and run-off sediment.

Without SAV, especially wild celery–waterfowl, fish and crabs have been in decline.

Hyde County government has been monitoring the state of the lake over the years, and Campbell initiated the call-to-action to stakeholders to work together, including farmers in the watershed who have been affected in recent years by serious flooding.

Working on the local level may be the best solution, he said, and the commissioners could get technical support from the county’s Soil and Water Conservation District, U.S. Fish and Wildlife Services, N.C. Wildlife and the N.C. Coastal Federation.

When it was discovered in 1585, the lake covered 120,000 acres–about three times its current size–and averaged six to nine feet deep.

Since the lake waters are not fed by any spring or river, level-control measures were installed years ago to keep saltwater from entering when water levels in the Pamlico Sound are higher than the lake and to flow excess water back into the sound.

And now, Campbell said, the water in the lake should be three feet lower than it is so that sunlight can get to the SAV.

About half of the wintering waterfowl in North Carolina spend time at the lake with aerial photo estimates between 100,000 to 350,000 birds in the winter.

Waterfowl are a major attraction for nature lovers, birders, and photographers. The lake is also popular for fishing, photography, hiking, and boating. There is controlled permitted hunting for waterfowl and white-tailed deer.

Moorman cited a 2006 study on the economic benefits of tourism to the lake when about $11.5 million dollars came to the county.