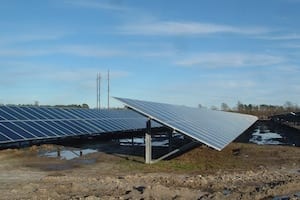 The Currituck Board of Commissioners approved a moratorium Tuesday on issuing permits for future solar farms, and could be moving toward making it tougher for future clean-energy projects to be located here.

The 60-day moratorium would give county leaders more time to come up changes to its development ordinance to control where large-scale solar farms could be built in Currituck.

Part of the proposal discussed at Tuesday’s meeting calls into question whether allowing more solar farms is in the best interest of the county as a whole.

Two solar farms have been completed or are nearing completion in the northern end of the county, while a third in lower Currituck is on the drawing board.

One is along N.C. 34 across from Shawboro Elementary School and was finished in 2015, while the other covers 2,000 acres south of Moyock on the former Wildwood Farms.

An application for a proposed solar farm on the former Goose Creek Golf Club in Grandy was denied last year by commissioners, a decision that is being appealed by developers in Currituck Superior Court.

The proposed ordinance states the two current arrays are “located adjacent to residential uses of land, that has resulted in numerous complaints to the county of incompatible activity on the solar array site with use of adjacent property for residential purposes.”

“County residents have reported adverse effects of solar array construction, activity and operation including aesthetic impacts and potential impacts on residential and other property values,” the ordinance proposal continues.

After an explosion of construction of solar farms in rural eastern North Carolina, and large-scale wind farms in the northeast, clean-energy initiatives have started to come under fire from local and state officials.

Perquimans County recently denied a permit for wind turbines along the border with Chowan County, although the project’s developers plan to proceed with the Chowan portion of the project while they appeal the denial by Perquimans.

A February report to the General Assembly from the N.C. Department of Environmental Quality expressed concern about losses of agricultural land and farm-related jobs in the state from conversion to solar arrays.

The agency also said loss of wildlife habitat was a concern due to large areas encompassed by solar arrays that
are fenced and affect food availability for wildlife.

Without the moratorium and subsequent changes to development regulations, known as the Unified Development Ordinance and adopted in 2006, the proposal by Currituck leaders says incompatible solar array projects may be established that could adversely impact the quality of life overall.

Despite possible revenue and other benefits the county sees from the conversion of land from agriculture to other uses, the proposals says there are more potential negatives than positives.

“(I)t is not certain or apparent that the use of land for solar arrays to the extent developed in the county and that which is anticipated is in the best interest of the county,” according to the proposal.

The county expects that it will take about two months to develop changes to the Unified Development Ordinance, including public hearings and eventual adoption.