Video courtesy Heather Lansing. The crash happens at 2:30 min. in the video.

Famed monster truck driver Dennis Anderson was hospitalized after suffering undisclosed injuries over the weekend when his Grave Digger truck crashed during a show in Florida.

The Currituck County resident was in the middle of a freestyle performance during the Monster Jam show Saturday night at Raymond James Stadium in Tampa, when he tried a flip and the truck landed upside down.

Anderson took several hard landings earlier in the performance, but it was not clear exactly when he was hurt.

Video of the incident shows Anderson being helped from the truck by safety workers. He was transported from the scene on a medical cart, but was sitting upright in the passenger seat and waved to the crowd as he left the stadium.

“Medical care professionals tended to Anderson on site and then transported him to a local hospital for further evaluation,” according to a brief statement issued Monday by Monster Jam promoter Feld Entertainment. “No further updates are available at this time.”

Dennis’ son, Adam, posted an update Sunday on Instagram, with a bit of his dad’s signature sense of humor included. 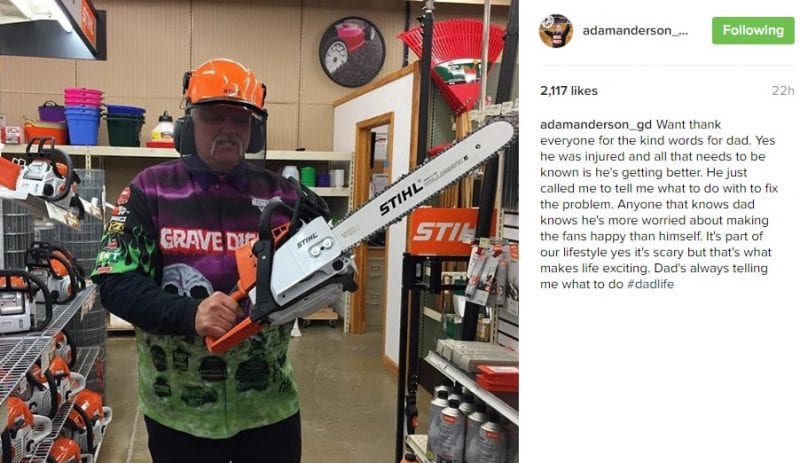 Anderson’s Digger’s Dungeon which includes a race shop and diner, and Muddy Motorsports Park, have become popular destinations along U.S. 158 near Poplar Branch.