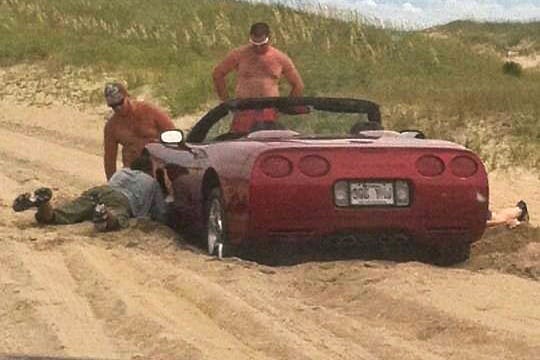 Weekend warriors with just a pick-up truck and a chain will no longer be able to offer to pull vehicles out of the sand for a few bucks after Currituck commissioners passed an ordinance requiring tow companies to register before they can work in the four-wheel-drive areas north of Corolla.

The ordinance passed April 17 requires tow companies to file an application with the county, requiring information that verifies they are a professional towing service.

That includes using wreckers licensed by the state Division of Motor Vehicles, carrying the proper insurance for a towing company as required by state law, being based in Currituck or an adjacent county and having a storage facility for vehicles.

During discussion of the proposal, board Vice-Chairman Mike Payment of Grandy asked if the ordinance would prevent someone who gets stuck on the beach from calling a friend to help pull them out for free.

County Attorney Ike McRee said that the under the definition in the ordinance, the permit is required only for those who are operating a towing service business on the beach, and would not apply to that situation or a Good Samaritan who offers to help someone.

Corolla Commissioner Bob White said the sheriff’s department is familiar with those who come to the Outer Banks on the weekend to try and make extra money towing stuck vehicles.

“It’s one of the good things of this, we can stop those individuals from profiting (on others misfortune),” White said. “We’re not supposed to have money change hands on the beach, with the exception of tow truck companies.”

McRee noted that the Sheriff’s Department has had concerns dating back to 2009 that those towing vehicles had proper training and prevent more incidents of vehicles being damaged while being pulled out by private individuals.

The ordinance passed on a unanimous voice vote by commissioners.

County manager Dan Scanlon said companies can begin applying for the free permit through his office at anytime, since the ordinance is now in effect.