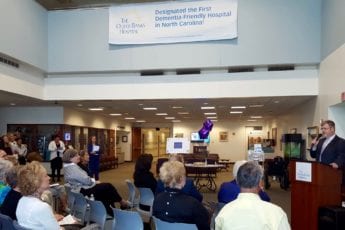 The Outer Banks Hospital has been recognized as the state’s First Dementia-Friendly Hospital in the state.

More than 85 community members and hospital staff gathered at the hospital in late April to hear Mark Hensley, dementia services coordinator for the North Carolina Division of Aging and Adult Services, congratulate the Outer Banks Hospital on its work on behalf of patients with dementia and their families.

“In North Carolina, we estimate there are 160,000 people with some type of dementia,” Hensley said. “I’m afraid to say that we expect that number to almost double in the next seven to 13 years.”

Hensley, who is leading the effort to implement North Carolina’s first Alzheimer’s state plan, emphasized the importance of educating the community about the increasing number of individuals with dementia and the urgent need to build a strong support system for caregivers.

Marcia Bryant, vice president of clinical operations at the hospital, explained that the effort started by training staff in best care practices that include a sensitivity to and an awareness of the difficulties faced by those with dementia and their caregivers.

“Every community includes individuals with memory impairment,” Bryant said. “We can create a dementia-friendly local community (by helping) those with dementia and their caregivers feel respected and included in our everyday lives. This is our challenge.”

Based on a 2013 Community Health Assessment that revealed that individuals with dementia and their caregivers needed more support, the Dementia Task Force developed and executed several goals, including creating educational programs for caregivers, first responders and local businesses; developing one-on-one counseling; advocating for the addition of a specialist on the beach, and establishing a local Alzheimer’s walk.

Denny asked audience members to raise their hands if they had first-hand experience with dementia through a family member, co-worker or friend. Almost every hand was raised. “That’s why we, the members of the Dementia Task Force, do what we do,” she said.

Jan Collins, a Dementia Task Force member and the first dementia-friendly volunteer at OBH, offered her insight as well.

“We know that with dementia comes feelings of anxiousness,” Collins said. “We help to reduce that agitation by approaching the individual in a different manner and implementing soothing tools.”

Collins is now one of many volunteers who are trained to work with patients with dementia and their caregivers. These volunteers are on call when a family member or caregiver needs to leave for a short time.

The program closed with the presentation of glass seahorses to Denny and Outer Banks President Ronnie Sloan for their leadership and dedication to the dementia-friendly cause. The purple seahorse was adopted by the Outer Banks community as the symbol for dementia because purple is the nationally designated color for Alzheimer’s and “seahorse” is a noun translated from the Latin word “hippocampus,” which is the portion of the brain that plays a major role in memory.

“This community is just amazing,” Sloan said. “Where there is a will, there is a way. I think we invented that here.”