Moyock would get a facelift under mega-site master plan 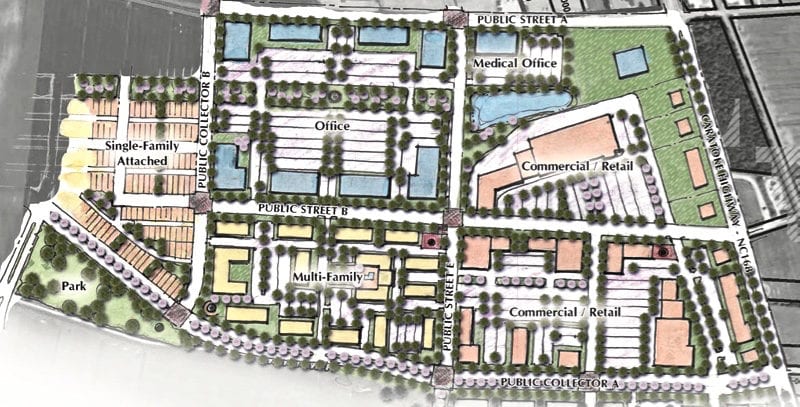 Plans for the northern entrance into Moyock include a broad boulevard with a landscaped medium, bounded by sidewalks, bike paths and greenways, and punctuated with well laid-out clusters of retail stores and office space.

The long-range master plan for the tentatively titled Moyock Mega-Site might make the entire state look better, at least to south-bound travelers crossing the state line from Virginia on U.S. 168.

The roadway’s current scenery in Moyock is a mashup of farmland, businesses and homes, some occupied and in good repair, while others, not so much.

Improving the town’s aesthetics is one way to draw people and industry to the area, Lombardi said.

The long-range master plan, approved by Currituck’s Board of Commissioners earlier this month, paves the way for a future “gateway” into Moyock, which will be designed to give visitors a good impression of the town, the county and the rest of the state.

Plans for the northern entrance into Moyock include a broad boulevard with a landscaped medium, bounded by sidewalks, bike paths and greenways, and punctuated with well laid-out clusters of retail stores and office space.

“If we design it correctly, it can be a jewel for Currituck and North Carolina — as a place to be, a place to live, and a place to come back to,” Lombardi said.

The master plan includes more than a facelift for U.S. 168, however. The proposed mega-site covers about 3,300 acres in and around Moyock, bounded to the north by the Virginia line, to the east by U.S 168 and on the south to South Mills Road. The western boundary of the plan is mostly undeveloped land.

The plan includes a mix of retail, medical and general office space along U.S. 168, with areas farther away from the highway designed for residential and light industry, including warehouses and distribution centers.

Residential areas will feature one type of housing that Currituck lacks — rental options for singles, families and senior citizens.

“Here in northeastern North Carolina, people 55 and older are the largest group and at some point will want to downsize,” Lombardi said. “That’s something we’ll offer.”

The key objectives of the plan are to create an employment center, bringing jobs to curb the weekday exodus to Hampton Roads, where many Currituck residents drive for work. It’s also designed to be a place for young people to come back to, as many young Currituck residents go away to college, then find their livelihoods elsewhere.

It’s also a great deal of work for planning staff in the upcoming months. The county’s Unified Development Ordinance, or UDO, must be updated to accommodate changes in zoning and density, Lombardi said.

“There’s going to be a lot of heavy lifting by the planning department, but I think they are up to the task,” he said. County officials hope to see the zoning and other changes ready to be adopted by commissioners over the next six to nine months.

The proposed Moyock bypass includes an east/west connector that will divert some traffic from South Mills Road. (Currituck County)

County staff will continue working with NCDOT on possible road changes, including the proposed Moyock bypass, which includes an east/west connector that links Moyock to South Mills, relieving traffic on the dangerous and curvy South Mills Road.

The proposed transportation improvements should make the Moyock area more attractive to light industry and distribution companies seeking warehouse space. Some companies have already indicated that they may be interested in moving to the mega-site, Lombardi said.

“We are in discussions, but not at the point to say who they are,” Lombardi said.

At this point, the focus has been updating commercial aspects of the U.S. 168 corridor, Lombardi said. “We want that to look nice.”

Prior to the commissioners’ unanimous vote on the project, Commissioner Paul Beaumont spoke out in favor of the long-range plan.

“We know that folks are coming to the county. We can either wait for it to happen, or we can do this. This is trying to get ahead of the snow ball,” Beaumont said.

“They’re coming … and if we don’t start something now, then we’re going to be left with a train wreck,” he added.