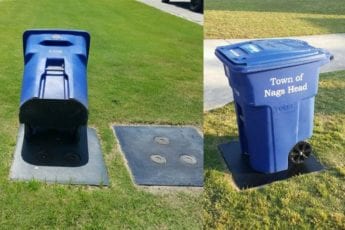 As a sanitation truck driver, Robert “Bobby” Hooper is all too familiar with the sight of trash cans blown over by the wind or knocked down by scavenging animals.

Besides being a nuisance for garbage collectors and homeowners, toppled trash cans can pose a threat to the environment, with the trash ending up on beaches and floating in the ocean.

So five years ago, Hooper resolved to do something about it.

His patent-pending invention is called Can Stand, and it’s a remarkably simple approach using magnetic force to stick the trash bins to the roadside.

A magnetic pad is installed curbside where the garbage would normally be collected, and then a metal plate is fitted on to the bottom of the trashcan. When the can is placed on the pad it can withstand 65 mph a fact that Hooper discovered via the highly scientific method of installing it on a trailer and driving at increasing speeds until the can fell out of the back.

The pad is made of cement and rebar with three powerful magnets, and it is smooth and flat enough to drive a lawn mower over. Despite the strength of the magnets, removing the can from the pad is easy, and shouldn’t pose any problems for children, elderly citizens, or, of course, the mechanical arm of a garbage truck.

Additional pads can be installed wherever the cans are kept by the house, and Hooper is even experimenting with smart pads that can send an alert to your phone when the can has been picked up. The price of the standard model Can Stand is $180.

Anxious to see his invention put into action, Hooper recruited two partners for his LLC, Kelly Maderus and Herb Council. Council has been hard at work ever since trying to convince the towns to install a Can Stand in every front yard in Dare Country.

“Every municipality, if you go talk to them, there’s a problem with garbage cans blowing over and garbage blowing all over the beach. This will eliminate that problem,” says Council.

He also made the case that Can Stand will increase efficiency in trash collection, not just because sanitation workers won’t have to waste time picking up fallen cans, but also because garbage collection can run faster and smoother with the cans all in uniform rows.

“Once you’ve spent that money, the long-term implications of savings, safety and all the other factors, including the environment are immeasurable, in my mind,” says Council.

Kitty Hawk has agreed to a trial run of 20 to 25 homes on Linbergh Street. The town plans to go door-to-door with a letter asking homeowners if they would be willing to have Can Stand installed, with the costs being footed by Can Stand LLC. They’re hoping that nearly all of those homes will be in a row, to better demonstrate its efficiency.

If they can prove the concept, the next step will be convincing the town to pay for more of them, and have them installed throughout Kitty Hawk. Then they’ll move on to the next town, the county or perhaps even further.

“I’d like to see them spread out all over the country,” says Hooper.