University Park: A choice for families, just over the bridge 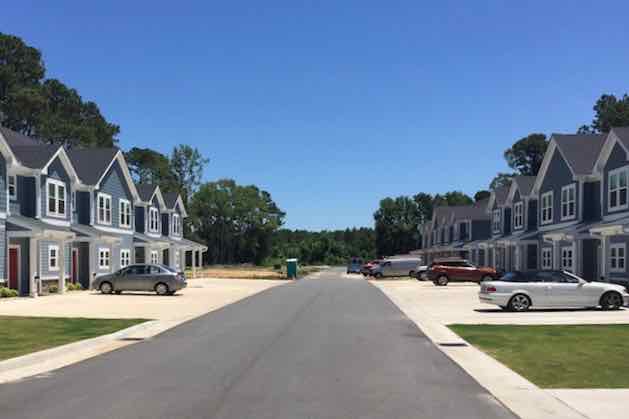 University Park is in Powell’s Point.

While the proposed units at Run Hill, which we covered last month, are targeted to a niche market seeking “affordable luxury,” another developer is taking a different tack with what he calls market-priced housing not far across the Wright Memorial Bridge.

Norman Bibeau, president and CEO of Elan Vacations, said he wanted to build a family community and he chose the name, University Park Townhomes, to honor his father.

The units are tucked away behind Elan’s main office at 8648 Caratoke Highway in Powell’s Point.

Bibeau began work on the project last year and 15 townhouses have been built and rented already.

There’s no shortage of discussion about the dearth of housing alternatives along the Outer Banks. The area lacks choices that feed a healthy economy and help sustain a work and retirement population in need of alternatives to home ownership.

We rely too much on buying or renting detached single-family homes. In short supply are condos, townhouses, cluster homes and, most of all, apartments.

They can be designed to suit blue collar workers, young professionals, retirees all along the income spectrum, and folks who simply don’t want to own a home anymore.

Two multi-family projects are under way in Dare and Currituck counties, the first such projects in a very long time.

The first part of our series focused on the Run Hill apartments in Kill Devil Devil Hills. This time we’re heading across the bridge to Currituck County.

In 1961, Bibeau’s father attempted to build a 140-lot development that crossed the borders of Swansea and Somerset, Mass. The project was to be called University Park.

In a story that should be familiar to 21st century Outer Bankers, one town had a sewerage system, while the other used individual septic. The two communities could not come together, and so the project, which the senior Bibeau envisioned as a middle-class neighborhood with rolling terrain and cul de sacs, was never built.

Bibeau is hoping to honor his father by providing needed housing options for similarly situation residents in 2017.

As he explains, “When this property came up for sale after foreclosure, we were able to purchase it. It is a large tract of land and the best uses were not for townhomes. It could have been commercial or even something like the new $46 million waterpark.”

Bibeau wanted to consolidate Elan’s offices and warehouses into one location, and that project constituted Phase 1 of development.

Elan is primarily a vacation rental management company but also engages in real estate sales and other forms of development.

“After we got the office and warehouse up, just from reading in local media, we knew there was a need for more housing options. So we decided this project wasn’t going to be ‘all about the money.’ We wanted to do something to help expand the inventory of ‘market priced housing.’ We’ve been planning this for over five years,” Bibeau said.

The result was the construction of the first 15 townhouses. The units are legally deeded as townhouses rather than apartments, although he has no intention to ever sell them as individual units. 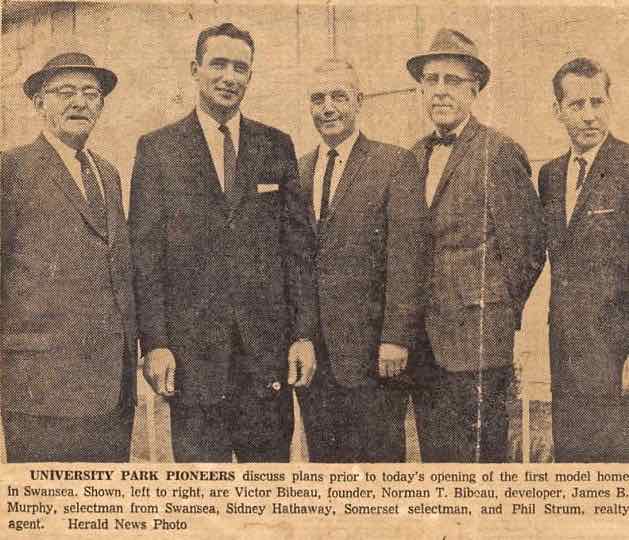 Norman T. Bibeau, Sr. (second from left) was the developer for the first University Park project in 1961. That project failed, but his son appears to have a market pleaser with the University Park Townhomes in Powells Pont.

Each unit contains three bedrooms, 2½ baths, a private patio and high-end appliances, including a microwave and refrigerator. A washer and dryer are also included.

In the great room, surround-sound speakers are recessed into the ceilings and each home is wired for the highest speed internet available in lower Currituck.

Two parking spaces are provided for each unit.

The grounds include a clubhouse and swimming pool, basketball courts, a playground and a pet walk.

All of the units are currently rented and Bibeau said the renters fit the exact niche markets he was seeking.

“We have families with children, including one family of four. These are people who are not ready to buy a home at this time. Some have ‘split’ work destinations, with one spouse working on the beach and other in Elizabeth City,” he said.

Others are temporary renters; some on temporary work assignments, while others are in the process of purchasing or building a new house.

And a few more have come because they wish to downsize or no longer own and maintain a home; retirees fit into this category. 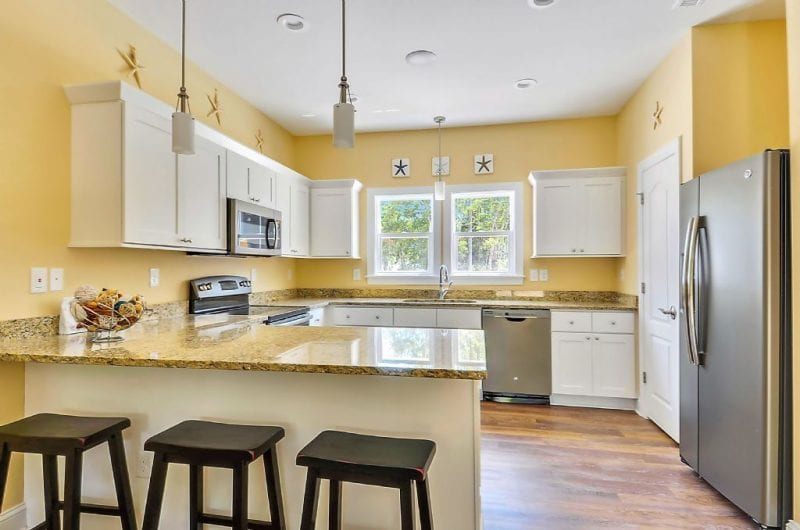 A well-appointed kitchen comes in every townhome.

Carolyn Hickock, Elan’s broker/Realtor noted that the townhomes are extremely private, with six layers of walls and insulation between each unit.

So far, Hickcock said,no unit has had an electric bill over $100, which she believes in an indication of how well constructed and insulated they are.

And for those who are interested, tenants have not had real issues with the Saturday traffic.

“Most have adapted their schedules to it and in reality, we’re talking maybe six to eight days a year and not all day on any of those crowded Saturdays.

Presently, six more units are well under way and plans are to make them available in September, while another six just under way should be ready by late November or early December.

Bibeau said if those units rent out, another 12 units can be added to Phase 2, and there is still room for 39 more units to be added in Phase 3, for a total of 78 townhomes.

All of the units will follow the same 3-bedroom, 2 ½ bath floor plan.

All of which makes Bibeau, who loves to don a postman’s cap, hop in his golf cart and deliver mail that winds up at the main office to tenants, a very proud developer.

“I’m honoring my father’s legacy and we’re filling a need for housing not available on the Outer Banks at present,” he said.

And given the sold-out status of the first round of offerings, the market agrees with the marketplace pricing also.

More information can be found at: www.elanvacations.com/townhome-rentals