Residents tell state again: ‘No drilling off our coast!’ 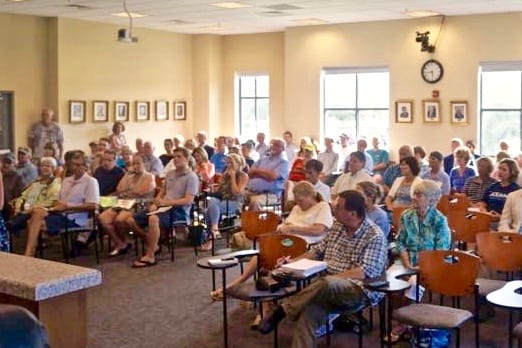 A full house was on hand for the hearing. (Russ Lay)

The North Carolina Department of Environmental Quality its third and final public hearing to Manteo Thursday on a proposed federal oil and gas leasing program along the Atlantic coast.

And the crowd of 124 people, including 34 who spoke publicly, delivered a strong message to the hearing’s panel members — drilling and seismic testing off the North Carolina coast is not wanted.

The meeting was held at the Dare County government complex  in the Board of Commissioners meeting room.

Not a single speaker offered comments in favor of offshore drilling.

While the crowds at this meeting was much smaller than the 2015 assemblage at the federal hearing in Kill Devil Hills, the composition of those opposed to drilling was exactly the same as two years ago — a united front of business owners, commercial and recreational fishermen, out-of-town property owners, elected officials, private citizens, Republicans, Democrats, independents and a handful of environmental activists.

Several themes were repeated by many of the speakers in addition to their opposition to the very concept of offshore drilling and the risks to the local economy versus what appears to many to be negligible economic benefits.

About a dozen speakers expressed dissatisfaction with the perceived pro-drilling stance of the state legislature, which is heavily dominated by Republicans.

Others expressed concerns about the federal role in the final decision-making and whether Washington will listen to the strong opposition to offshore drilling up and down the Atlantic seaboard.

Sue Kelly, a Kill Devil Hills resident noted, “Now the question becomes, what’s going to happen? Weren’t we here just a while ago saying the same thing? Didn’t I throw away my beat up sign that said “No Offshore Drilling” because I thought we had won … Do we, in fact, have a representative democracy? Are we going to get what the citizens have said very clearly they do not want? Who’s going to win? Will the folks who stand to make a lot of money win, or will we win?”

Jan DeBlieu, a Manteo environmental writer and former Coastal Federation lobbyist, noted that the continental shelf off of Cape Hatteras was “ground zero” for the oil companies, a reference that this area off of North Carolina’s coast is considered by geologists to have the greatest chance of yielding natural gas.

DeBlieu also deflected arguments from the oil industry that because natural gas is their target, oil spills are not a risk factor.

“Oil is often in the same location as natural gas and even without oil, extracting gas is a very dirty business,” she said.

Lee Nettles, managing director of the Outer Banks Visitors Bureau recited numbers that he said demonstrated that the risks to the local tourism economy far outweighed any potential benefits.

Nags Head Commissioner Susie Walters cited the $1 billion contribution tourism makes to the local economy and sakd one-third of Dare County’s residents were directly employed in a “tourism-related job” and the basis for that economy was our “unspoiled environment.”

Fellow Nags Head Commissioner John Ratzenberger also drew upon the numbers generated by tourism versus the lack of locally recognized revenue from oil drilling, the risks if something goes wrong and the small chance of any drilling yielding natural gas as violations of “common sense.” 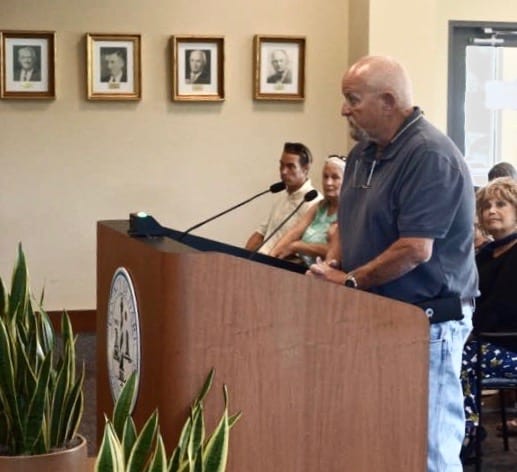 Terry Gray, a candidate for commissioner in Kill Devil Hills this November, told the panel of his families involvement in commercial fishing and his fears that drilling and seismic testing would pose a grave risk to the fishing industry and its traditional place in the local economy.

Kill Devil Hills Mayor Sheila Davies may have uttered one of the most significant arguments against drilling when she said: “ We don’t have a fallback industry. Tourism is our industry. It is our livelihood.”

One other theme mentioned by several speakers was their inability to contact or hear back from federal and state elected representatives.

None of the area’s representatives, which include U.S. Walter Jones, state Sen. Bill Cook and state Rep. Beverly Boswell were in attendance, nor were any of their staff members.

Prior meetings were held in Wilmington and Morehead City earlier in August.

The purpose of the meetings was for the state to gather comments from the public, which in turn will influence a report the state will send to the federal Bureau of Ocean Energy Management. That report will go out under the signature of Gov. Roy Cooper.

BOEM is supposed to take the comments from North Carolina and other states that would be affected by drilling along the Atlantic Ocean continental shelf into consideration as they develop a five-year plan on exploiting oil and gas deposits along the continental shelf.