When: Saturday, Sept. 23, 11 a.m. Registration starts at 9 a.m.
Where: Vertigo Tattoo, 7594 Shipyard Road, Manns Harbor
What: Bring a new, unwrapped toy plus $10 per person registration fee.The run leaves Vertigo Tattoo at 11 a.m. to Bodie Island Lighthouse for a 30-minute layover. On to Lucky 12 Tavern in Nags Head for toy collection, then north along the Beach Road, culiminating at BK Shuckers in Kitty Hawk.Find more information »

The Toy Run is made possible by an amazing collaboration of volunteers from local motorcycle clubs, charities, government and other interested individuals.

Significant support also comes from local businesses who donate money and toys and provide starting and rest stops along the course.

This is actually the second iteration of a Christmas Toy Run.

Brian and Heidi Mervine of Vertigo Tattoo in Manns Harbor organized the first toy runs and ran the event for many years.

But bad luck, including successive years of bad weather, hindered attendance, and the run began to cost more than it raised in donations for the children.

We sat down with three volunteers to discuss the upcoming run; Terry Gray, the organizer of the event, Heidi Mervine of The Source Church,

A hurricane proved to be the straw that broke the camel’s back, and Vertigo reluctantly suspended the toy run.

All of which led Terry Gray and a handful of other volunteers to try to put the run back on track.

The new group consisted of representatives from across the beach, with one each from Southern Shores and Nags Head, and two each from Manteo and Kill Devil Hills/Colington.

Later a representative from Hatteras Island was added, and the presence of Vertigo added mainland Dare so that all areas of Dare County would be included in the effort.

They started a 501(c)3 non-profit corporation and the first people they visited were the Mervine’s at Vertigo to see if they could use their facility as the starting point in honor of Vertigo’s past history with the fundraiser.

“We decided what we wanted to do was raise money and promote motorcycle events in the areas that would benefit the children of Dare County at Christmas,” Gray said. “It was all new to us. We had no idea how it would turn out, but we raised $15,000 in toys and cash from our initial event.”

The Dare Center and the Outer Banks Woman’s Club helped distribute the toys, and more than 400 children received gifts for Christmas in 2016.

While many bike clubs participate, Gray cited the Outer Banks HOG chapter as key in making the runs successful. The chapter made a substantial contribution and their members serve as the safety unit to make sure it’s a safe run since it’s a completely escorted ride.

The HOG group came back this year and all bikes are welcome. “There are no attitudes here, it’s all about the kids and we want all riders of all makes and models of bikes to participate.”

Based on last year’s success, Gray said that this year businesses, including Realtors and restaurants, came to them wanting to participate and donate not only money for toys, but cash to offset the costs so that almost all of the money raised from participants can be spent on toys.

This year, Gray said, even more children are in need, and as a result, the group has set an ambitious goal of $25,000.

For the 2017 event, the DCMTR is partnering with the Dare Center and The Source Church to distribute the toys this Christmas.

Heidi Mervine is the creative director at the church and also works in several of the church’s outreach programs.

When Vertigo ceased sponsoring the toy runs, Heidi and Brian teamed up with the Source Church to start a program known as “Stuff the Bus” to collect and distribute toys to children at Christmas who otherwise would have no gifts to open on Christmas Day. 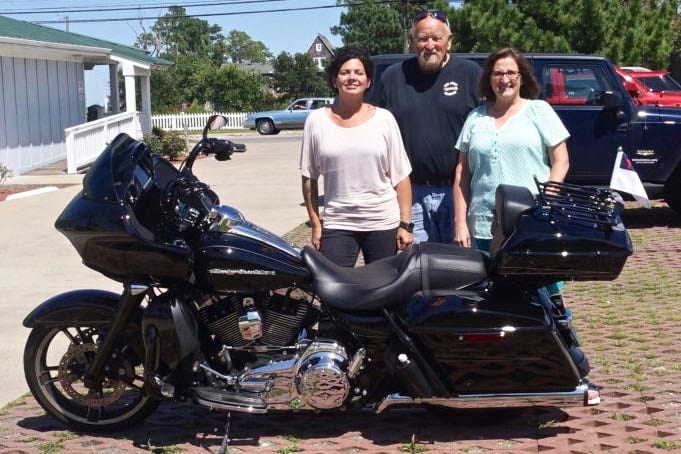 Stuff the Bus is now in its third year. “We’ve always donated to the Outer Banks Women’s Club as well as other churches and the families we sponsor at the church,” Heidi Mervine said.

“Last year we began looking for other partners as we were unable to serve all the children in need that came to our attention.”

Mervine said that often the focus is on younger kids, but she noted that teens also look forward to Christmas and the “Stuff the Bus” program seeks to also serve that age group.

“As we added older kids, that required a lot more legwork; we had to go out and really shop for them as the kind of gifts they need are different than those for younger children and that’s when we decided we needed a partner,” Mervine said.

And so becoming partners with the DCMTR was almost like a homecoming for her, as Vertigo and the Source Church are now a part of something Mervine and her husband started all those years ago.

The Stuff the Bus event will be at Walmart Nov. 25, the Saturday after Black Friday and will run from 9 a.m. to 4 p.m.

Sandy Scarborough is the director of Dare Center, which is located at the Dare County complex in Manteo. The center is open to all Dare citizens and organizes activities for all age groups, and

The Center also has a toy drive, which originated with the Roanoke Island Freedman’s Colony.

“They started their toy drive at the community center in Manteo and when we opened the Dare Center in 2009, they asked if they could hold it at our facility,” Scarborough said.

Over the past nine years the Dare County Center staff has gradually taken over the drive from the Freedman’s Colony, and the drive has expanded from a one-night event to a three-night affair.

They target children from ages 0-12 but have also expanded to help older kids if they have enough money left over after serving the target age group.

Thus far, Scarborough says they have been able to serve all children who come to them.

The Dare Center effort requires parents or sponsors to come to their facility to apply for participation. The Dare Center then coordinates with Dare County Social Services and the Angel Gift program from the Outer Banks Woman’s Club.

This vetting ensures that families who have applied to both programs are not double-served, so funds can be spread over more children.

They raise funds from a silent auction and a new 5K Fun Run that will take place in November.

In addition, collection boxes are distributed throughout the area and Toys for Tots also donates gifts to the Dare Center program.

Like the Source Church program, monetary donations are used to buy presents for older children, while donated toys cover the needs of younger beneficiaries.

Older children often are given bikes and helmets and in addition to cash donations, Coastal Family Church also donates those items to the Dare Center.

“We had about $2,500 collected to purchase bikes, so we went to Walmart. Customers in the store asked what we were doing and many of them said, ‘Here’s $100 for a bike. And then someone else saw that and we’d get another $100 and the pattern repeated as we bought more bikes!”

The DCMTR wants as many riders as possible to join the ride and out-of-town riders are welcomed and encouraged.

Business and private donations are also welcomed and needed.