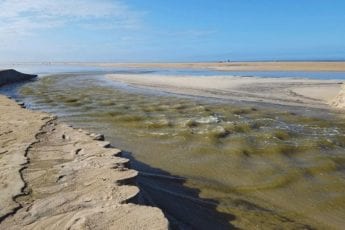 Rough surf from Hurricane Irma brought more than just great waves to the popular Shelly Island sandbar. It also brought some dramatic changes to the long formation off of Cape Point.

Most noticeably, it appears that the sandbar is finally connecting to the rest of Cape Point at low tide, at least for now.

“It appears that at low tide there is no water anymore between the sandbar and Cape Point,” Cape Hatteras National Seashore Superintendent Dave Hallac said last week. “What happened is over the past few days, the sandbar has moved further and further to the west, and last night it curved around and made an area where it connected at low tide.”

The part where Shelly Island is connecting is at the southwest corner, or the westernmost part of the sandbar, although it appears as if the entire formation is noticeably closer to the rest of The Point.

In addition to the new low tide connection, visitors to the Shelly Island sandbar over the past several days also caught another unique change to the landscape. A pond that was located on the edge of the Point and which was close to the ocean opened up, pouring water into the channel that separates the sandbar from the rest of Hatteras Island.

Changes to Shelly Island have been common over the summer, with the sandbar steadily growing in size since it was first identified in the spring of 2017.

However, the multiple days of high waves and surf brought the most dramatic changes in recent memory, and has inevitably led to its connection at low tide.

“From the Park Service perspective, it really doesn’t matter right now [who owns it],” he says. “We have a wonderful relationship with the State of North Carolina … In the end, we may end up with an agreement to jointly manage it, if it’s still there next summer.”

There’s no way to know how Shelly Island sandbar may change in the coming months, weeks, or even days, but for now, frequent visitors are surprised to see such a dramatic difference to a sandbar that has slowly changed all summer long.

“Every time I go out there, it’s different, but it’s still amazing,” says Hallac. “It’s just so beautiful to see the bar, the water in between, and all the families enjoying it. It’s a very happy place to be.”