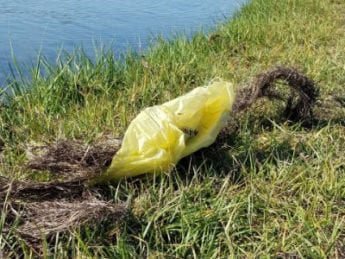 The General Assembly will likely take up an override on Oct. 4.

The ban on single-use, thin plastic shopping bags by most retailers on the Outer Banks will continue, for now, after Democratic Gov. Roy Cooper issued a veto Thursday of a bill passed by the Republican-controlled General Assembly in August that would amend state environmental laws.

House Bill 56 had stalled out in June after the House and Senate passed widely different versions and had been unable to reach a compromise.

The bill would roll back a 2009 ban that initially blocked larger retailers on the barrier islands from Corolla to Ocracoke from using the bags, then expanded the prohibition to all businesses.

Championed by former state Senate leader Marc Basnight, D-Dare, the law requires retailers to offer recyclable paper bags and to give a rebate or other incentive for each re-usable bag a customer uses.

The main spark rekindling HB 56 last month by the General Assmebly was the GenX controversy on the Cape Fear River, and a request by Gov. Roy Cooper for funds to expand study of the chemical.

GenX is an unregulated compound used to make Teflon and other products, and has been found in the main water supply for the City of Wilmington.

Lawmakers approved $435,000 to be split between the Wilmington-area water utility and UNC Wilmington for studies.

Cooper had requested $2.6 million for the N.C. Department of Environmental Quality and Department of Health and Human Services to monitor GenX and study the health effects of long-term exposure.

“Clean water is critical for our health and our economy and this legislation fails to appropriate any needed funds to the departments in state government charged with setting standards and enforcing laws to prevent illegal chemical discharges into rivers used for drinking water,” Cooper said in a statement announcing the veto.

“It gives the impression of action while allowing the long-term problem to fester. And it unnecessarily rolls back other environmental protections for landfills, river basins, and our beaches,” Cooper said.

“Instead this legislation diverts needed resources to the local utility and UNC-Wilmington and eliminates a local plastic bag ban supported by local governments and businesses that was passed to protect the environment in the Outer Banks,” according to Cooper.

Senate leaders focused on the GenX issue in their response.

“I am troubled that the governor would place politics ahead of public safety, and prioritize bureaucracy over results,” said Sen. Michael Lee, R-New Hanover. “He is now on record for rejecting the only proposal that will actually help clean our drinking water in the lower Cape Fear region.”

“Shame on Gov. Cooper for vetoing a local solution, developed by this region’s local representatives, to immediately improve water quality for their constituents, neighbors and own families – simply because it did not achieve his preferred objective of growing a bureaucracy that has thus far failed to resolve this crisis,” said Senate Leader Phil Berger, R-Rockingham.

A provision to roll back the bag ban was added to the bill earlier this summer by Sen. Bill Cook, R-Beaufort, after a separate repeal measure introduced by Rep. Beverly Boswell, R-Dare, failed to advance in the state House.

Cook and Boswell voted in favor of the bill on Aug. 30. Rep. Bob Steinburg, R-Chowan, whose district includes Corolla, has opposed the repeal since it was originally introduced in the spring, but missed the vote because of a previously scheduled personal appointment.

The Dare County Board of Commissioners and the town boards of Duck, Southern Shores, Kitty Hawk, Kill Devil Hills and Nags Head, along with The Outer Banks Chamber of Commerce, passed resolutions or sent letters to Boswell and Cook opposing the repeal.

Citizen and small business opposition to the rollback focused mostly on lobbying Cook and Boswell, rather than taking on the larger chains with locations in the area who remained silent on the issue.

The repeal effort had the support of the N.C. Retail Merchants Association and several conservative-leaning statewide groups.

Boswell and Cook did not mention the bag ban repeal in written statements to the Voice on Thursday.

“I am extremely disappointed in Gov. Cooper’s decision to veto a bill that provides nearly a half-million dollars to begin dealing with the pollutant GenX,” Boswell said.

“Once again, Gov. Cooper is turning his back on actually addressing the immediate problem of GenX in the drinking water of the Cape Fear region,” Cook said. “Gov. Cooper needs to focus less on growing the government bureaucracy that has thus far failed to resolve this crisis, and more towards seeking solutions that ensures clean, safe drinking water.”

Steinburg said that although he would have opposed the ban if he had been in the General Assembly in 2009, he is willing to support it because its the will of the people in Currituck, Dare and Hyde counties.

He noted that nearly all correspondence to his office has been in opposition to a repeal, and has come from conservative, liberal and unaffiliated residents and business owners.

“I’m business-friendly and I understand the small savings that the stores would see, but we do not make plastic bags in North Carolina,” Steinburg said.

“We have KapStone in Roanoke Rapids, right here in northeastern North Carolina, that makes the material for paper bags and employs 425 people with wages well above the norm for the area. That means a lot to the region as a whole, including our local timber industry.”

“The people of the Outer Banks see it as a source of pride and can say ‘Our beaches are so clean we don’t even use plastic bags’,” Steinburg said. “I think the modest cost that retailers have to absorb is more than made up for by the record numbers of tourism and the business tourism generates.”

But Steinburg said that because of his role on a special legislative committee on GenX, he is wrestling with how to vote on an override.

“The bag ban should have been a stand-alone issue. I’ve told people that I’ll stand up for the bag ban,” Steinburg said. “I never would have voted for repealing the ban as a separate bill.”

“My concern is the GenX problem, and being on the committee does make it difficult. I’m not trading one thing or the other. With or without this bill,we will get the GenX situation fixed,” he said.

“But we are talking about the safety of drinking water and health for citizens in the Wilmington-area,” Steinburg said.

Another section in the bill would create a coastal storm damage mitigation fund to pay for beach re-nourishment. The fund would have several sources of revenue, although none are specifically designated, and local governments would have to match state funds for a project.

“If we override the veto, the fund is also authorized to go towards the construction of terminal groins and jetties,” Boswell said. “Several local organizations from my district have been advocating the General Assembly to establish this type of fund for years and this bill does that.”

“Preserving the single greatest amenity and attraction in the region, the beaches, is essential to the state economy,” Boswell said.

“Regardless of the governor placing politics ahead of public safety, I will continue to work closely with my legislative colleagues as we seek common sense ways to keep North Carolina’s water clean and a healthy economy,” she said.

“Without hesitation, I encourage my Senate colleagues to override his veto,” Cook said.

The General Assembly is scheduled to return to Raleigh for another short session on Oct. 4 where they will likely take up the veto override.

If the ban is repealed by state lawmakers, an option to implement a ban on the local level is not available.

Dare County Manager Bobby Outten reported to county commissioners on Monday that state statute prohibits Dare County from even holding a referendum on implementing a ban.