Crabdaddy catches on as a good bet for food and fun 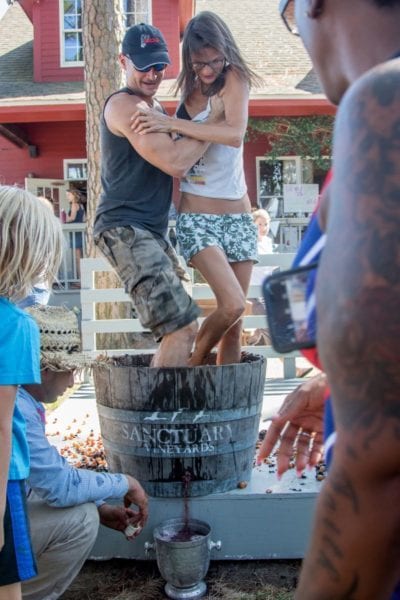 Shannon and Laura Brugh, of Kitty Hawk paired up against another couple in the grape stomping event, filling their bucket the fastest.

In the shade of the towering pines, we joined the crowds of crab enthusiasts who had collected around the picnic tables and improvised stand-up counters.

With our dowel mallets and brown paper bundles of fresh steamed callinectes sapidus (blue crabs) in hand, we sidled up to an open spot and commenced to crack the shells.

Our own tap-tap-tap-crack sounds added to the chorus as a gentle northern breeze carried not only the sound, but the fragrance of the spiced crustaceans across the grounds of Sanctuary Vineyards In Jarvisburg. We had come to be a part of Crabdaddy.

“One day we get this text from John (Wright) that reads, ‘I’m thinking about the Crabdaddy, rising from the sound,’ ” said Olivia Stuart, who with her husband, Hunter Stuart, own I Got Your Crabs. Of John and Hunter, she adds, “They’re just two little entrepreneurs, keeping it alive.”

We met up with John Wright later in the afternoon.

“You just keep throwing ideas against the wall, see what sticks.” Crabdaddy, now in its fourth year, is an idea that has stuck.

They limited ticket sales to 750 and just had sold all but the last hundred the week prior. Another scale is the volume of crabs consumed. By Stuart’s accounting, by 12:30, an hour and a half after opening for the day Sept. 23, they had served 25 bushels of crabs. By 4 p.m. they had served 60 bushels, and still had two hours left to go.

Couples paired up in the vigorous grape stomping contests, competing to see which could fill the bucket with juice the fastest.

Others took part in the hayrides, while the more adventurous guests took to the sky in a tandem hang glider rides courtesy of Kitty Hawk Kites. An ultralight aircraft towed the gliders and their occupants high overhead, releasing them to soar over the vineyards, then swooping to a gentle landing in the field just beyond.

A series of bands took to the stage, providing tunes and an opportunity for those so inclined to work off some of that beer, wine and butter with a bit of dancing.

Next up on the calendar for the winery is Nov. 25 the day of the Big Currishuck Oyster Fest, where the mollusks will take center stage.