Storm rearranges new island off the Point on Hatteras 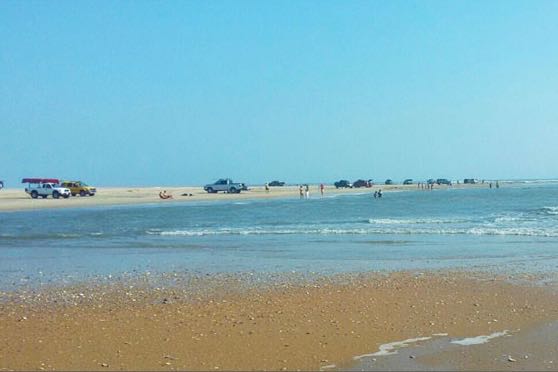 Looking toward the Point. (Joy Crist)

Shelly Island was a shell of its former mile-long shape a day after Maria headed out to sea off the Outer Banks.

The storm has rearranged the sandbar, which became an item of national fascination after it appeared off Cape Point earlier this year. One end now connects to the rest of the Point, and the other is isolated and noticeably offshore.

At roughly mid-tide Thursday evening, the end of Shelly Island that was closest to Hatteras Island had merged with the rest of the beach, creating a wide but short peninsula.

The opposite end that was furthest away from Cape Point was the shape of an oval and was surrounded by rough surf nearly out of sight.

In between, where Shelly Island used to run parallel to Cape Point, was a long shoreline with relatively shallow waters and waves. On Thursday afternoon, beachcombers were wading into the water that now bordered Cape Point, while surfers made a long trek out into the ocean.

Beach combers will be glad to know that there were still piles of shells along the newly widened Cape Point, but on Thursday they were intermixed with dozens if not hundreds of starfish, horseshoe crabs and closed pen shells that were washing ashore with every wave.

There’s no way to tell if the Shelly Island sandbar’s new geography post-Maria is permanent, and the island may change again as the surf calms down in the next few days.

For now, the long strip of sand that used to be Shelly Island has been replaced with a wide beach where the shelling is still good, but the landscape is noticeably different.