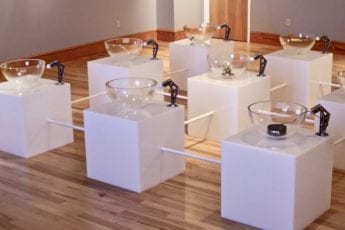 These glass hemispheres are struck by a mallet every time there’s an earthquake, about 50 times per day. (Christina Lorena Weisner)

A College of The Albemarle art instructor has upcycled old glass spheres from a geophysics lab to create a sculpture that literally resonates.

The sculpture will be on display through Nov. 10 at COA’s Professional Arts Building Gallery in Manteo, and an artist’s reception for Weisner will be held from 5 to 7 p.m. Friday, Nov. 3.

Weisner found the cases at the University of Texas’ surplus. The hemispheres had been discarded by the UT Institute for Geophysics, and were one stop away from the landfill. Curious about the former use of these objects, she met with a scientist and learned where most of the seismometer cases had been deployed.

The glass hemispheres had been dropped to the bottom of the ocean in places like the Bering Straight, near Taiwan, and the Chicxulub Crater, an ancient impact crater buried partially underneath the sea near the Yucatan peninsula in Mexico.

Scientists at the UT Institute for Geophysics and information technology specialists at College of the Albemarle helped Weisner understand how the seismometers worked, and taught her to rig them to function in a sculptural installation.

Each of the nine glass hemispheres in the sculpture sits atop a plexiglass cube. A mallet-rigged system strikes the hemispheres when activated by real-time seismic activity, based on live data provided by the United States Geological Survey.

There are approximately 50 earthquakes worldwide per day. One of the hemispheres houses a working seismometer, which reads and displays the frequency at which the glass bowls are being hit by the mallets, as well as the movements caused by the footsteps of people viewing the work.

The resonating sound made by the mallets hitting the glass alters the space physically and psychologically as the sculpture creates a composition of tones correlating to the movement of the earth.

Weisner is an instructor in the Department of Fine Arts at the College of the Albemarle. Her work often employs found objects, scientific instrumentation and elemental materials, and has been shown both nationally and internationally, most recently at Humboldt University in Berlin and Artfields in South Carolina.

The exhibit and reception will be held at College of the Albemarle’s Professional Arts Building Gallery, 205 U.S. 64 S. in Manteo.