Carolina Bar-B-Que: Living up to a venerated tradition 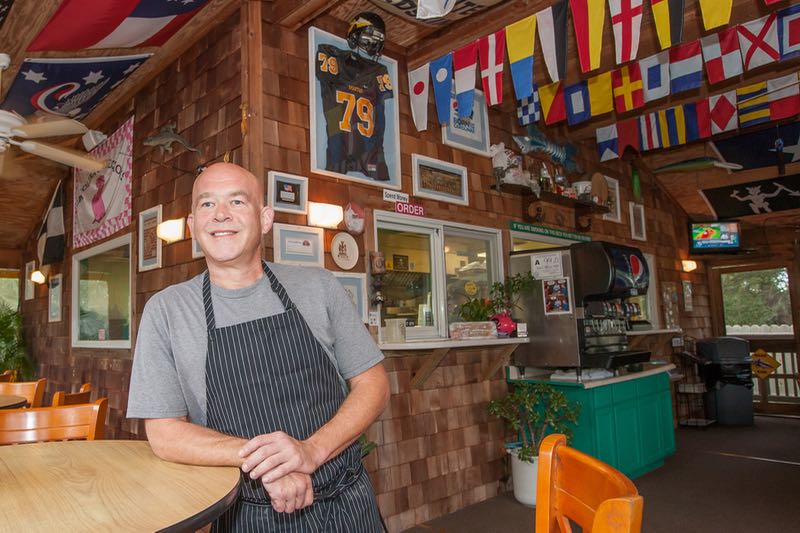 Mike Weaver in the dining room at his Carolina Bar-B-Que Company restaurant in Manteo. 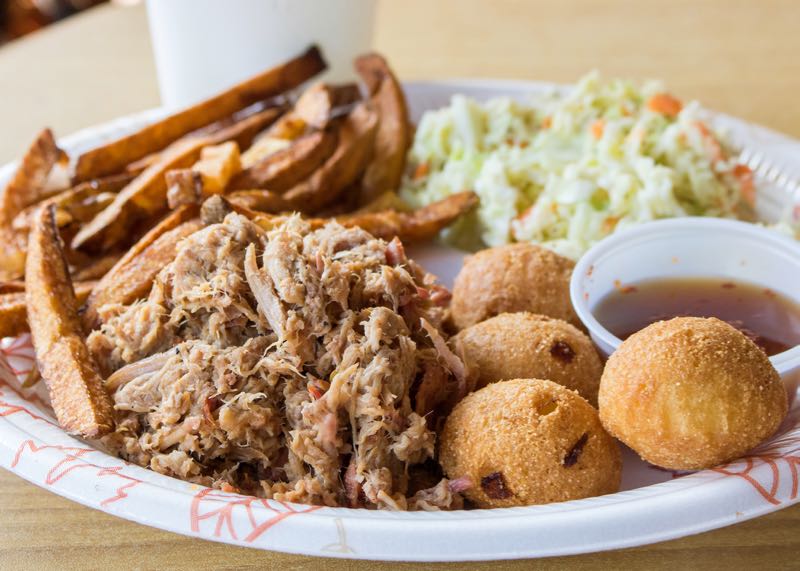 We got a tip. We checked into it. We are glad we did.

As those who live here know, barbecue is practically sacred in North Carolina. Do it wrong and you won’t stay long. We are glad to report that Carolina Bar-B-Que Company in Manteo does it right.

The building is familiar. The property near the Dare County Government Center on the town’s south side has hosted various eating establishments that have come and passed. Something tells us this one will take hold.

The dining room is a screened-in porch that wraps around two sides of the kitchen. Four-place tables, decked out in red checkered tablecloths and sturdy chairs fill the larger section of the room. Along the other, narrower side, are tall bistro-style tables.

Flags cover the ceiling, making an instantly colorful impact. Blackbeard’s own Jolly Roger reminds you that you are in coastal North Carolina. If that didn’t do it, surely the lusty scent of smoked pork in the air will do the trick.

We went for the plates, as opposed to sandwiches, and were soon making yummy sounds as we tucked into rich, authentic, Eastern North Carolina barbecue. Smoky and succulent, pulled and finely shredded, the meat is smartly dressed in home-made sauce with the perfect balance of heat from the peppers, sting from the vinegar and just enough sweetness to the pork a completely balanced bite.

We also had the smoked chicken, delivered in the same manner with all the taste components one would expect.

The sides we shared included slaw, which was up to measure, home-made potato salad, which was velvety with a nice tartness, and tasty house-cut fries. Delicious spherical hush puppies come with each plate.

Feeling adventurous, we chose the fresh-made lemonade over tea and were happy with the choice. It was like drinking sunlight but not at a premium.

On a return trip, because good places always get a return trip, we attacked the colossal 1/3-pound cheeseburger with a topper of that good pork barbecue. Oh yes, and bacon because why not? On this occasion, we sampled not just the Eastern Carolina sauce, but also the tomato-based alternative dubbed “Yankee Sauce.” Both are smack-worthy.

Barbecue, burgers, Nathan’s hotdogs as well as fried shrimp, clam strips and flounder round out the menu. Although tempted, we did not give in to the Deep-Fried Twinkie for dessert. No room left, this time. 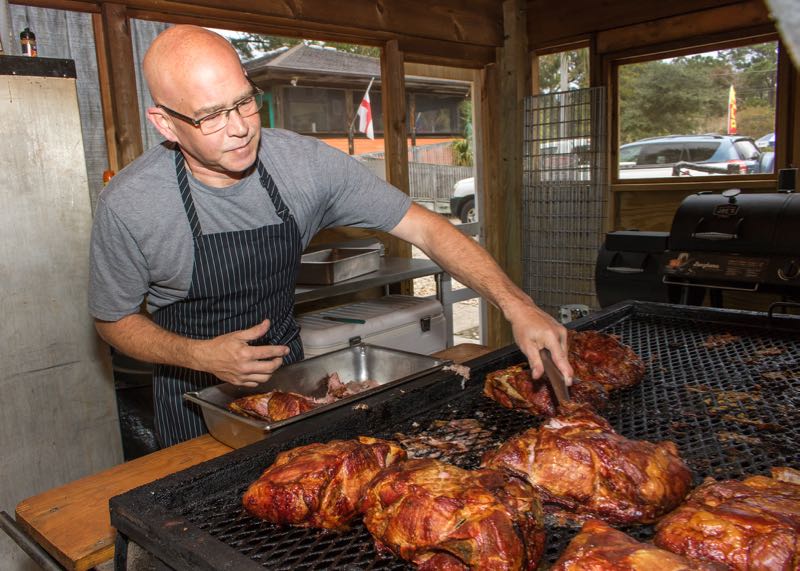 Weaver pulls off the day’s pork shoulders in his custom smokehouse.

This place is new. How did they get this good this fast?

Behind the smokehouse, owner Mike Weaver raises an axe in an arc over his shoulders. The blade comes down sure and fast and cleaves a broad section of pecan trunk in two. This is barbecue at its most basic level, starting with the wood. Weaver is in his element, living his dream, but it was a long time in the making.

Weaver grew up just across the North Carolina border, in Southampton County, Va., near a sharp turn in the Nottoway River. By age 16 he was learning the craft of pit barbecue at the side of his father. Together they smoked and sold their pork at different area festivals nearly every weekend. While young Mike tended to the barbecue, his father sold candles he’d made in the craft tents.

Through his teens and young adulthood, he kept sharpening his barbecue craft. With catering being a mostly weekend affair, Weaver went on to “day jobs,” ranging from designing logging equipment to civil engineering.

When the big job layoffs came in 2009, it was time to alter course, from desk man to pit boss. “I have a good product and I’m pretty good with people,” he said, so he loaded up his catering truck and headed to the Outer Banks for a new base of operations.

“I found out I had to hustle a lot to get by down here,” Weaver says, recalling the various side businesses he undertook working for area restaurants, doing upholstery and selling engine parts on eBay, as the catering kept growing.

“We did the first Bluegrass Festival with La Dolce Vita (the Manteo Italian Restaurant) and served pulled pork barbecue pizzas. It was phenomenal,” Weaver said. “We sold 85 pounds of barbecue on 65 pizzas on that first weekend. I knew right then I needed to get my product out.” 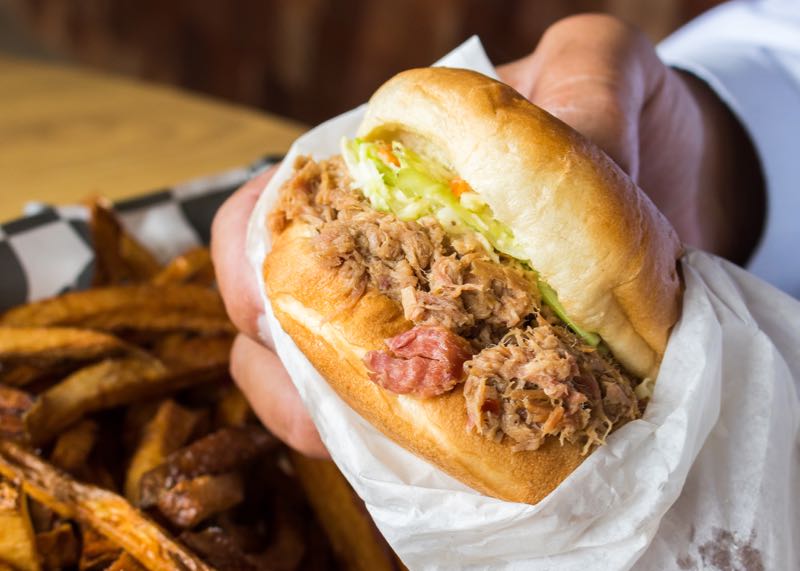 He started sharing his barbecue with area chefs and they were impressed. The catering gigs increased and the search for a facility began. But there were road blocks.

“My dad moved down here about four years ago and lived with me. A great thing is my brother lives here in the Outer Banks also and we spent a lot of time together.”

Then his father was then diagnosed with lung cancer.

“It’s a good thing he was here, I realized at that point in time that he needed me and I needed him too.” While fighting the cancer, his father helped him with ideas and pointers on the restaurant concept.

His father passed away. The stresses caught up with Weaver, affecting his own health. Weaver said, “I was a walking stroke.” He credits his pastor at Coastal Family Church with helping him find the strength to get his health back and fulfill his purpose.

“I saw dad off this earth. All the doors opened up, all the hills in the way were removed.”

Property owner Jeff Landreth, then convinced of Weaver’s earnestness and ability, agreed to lease him the space. Weaver said, “He really wanted to give me the opportunity and the chance.”

Soon thereafter, Weaver got to work, setting up his kitchen, transforming and expanding the facilities.

He built a smokehouse at the rear of the parking lot, which isn’t only practical, it’s an attraction, “With that smell out there, rolling around.”

Plans for future developments include adding a produce stand. With his interest in horticulture already evident in the plantings he has added around the property, a small greenhouse operation is also in the works.

In addition, he is working on getting his meat and poultry inspection license from the North Carolina Department of Agriculture & Consumer Services. With that in place, he’ll be able to brand, produce and distribute his products, both wholesale and retail, within the state.

The hours are currently limited because of storage capacity. Once the walk-in he purchased in parts is assembled and running, he can open for longer hours. Weaver plans to stay open all year on selected days of the week.

“People want their barbecue and their Brunswick Stew in the winter, and when I tell them I’ll be open, literally they get excited.”

Mike Weaver’s barbecue is getting notice on social media, garnering him very positive reviews on sites like Yelp and Trip Advisor and diners have been increasing through the months.

“It’s all new to me. I’ve never had a restaurant before. You’re talking to a guy who’s five month’s green into something he’s dreamed about. The dream has come together. I found my purpose right here in this community and the community has accepted me in the same fashion.”