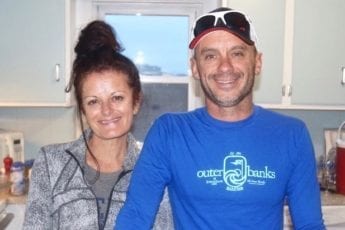 In its 12-year run, the Outer Banks Marathon has seen official records set and individual bests surpassed. It has been the conduit for hundreds of firsts, be it a runner’s first marathon, first 5K, or  first competitive race.

But thanks to a tip from local marketing consultant Kathy Sparrow, we’ve found that another record, of sorts, appears to be held by a U.S. Army sergeant.

Staff Sgt. Matt Tourville has run in every Outer Banks Marathon event since it began in 2006.

That includes 11 Sunday full marathons, one half-marathon, and each and every 5K and 8K race since event organizers added the Saturday events a few years after the inaugural 2006 competition.

Sitting down after this year’s race, he recounted his dozen years running the Outer Banks Marathon and all of the associated Saturday competitions.

Tourville, who is from Alexandria, Va., began his story noting that as the first marathon approached in 2006, he had no intention of participating in it or any other marathon.

“I did so much running in the Army as part of my job, I thought people who ran marathons were simply not sane,” he said.

Tourville is an Army Combat Arms specialist, with a  sub-specialty in mountain warfare. He is also an Army Master Fitness Trainer.

As the first OBX Marathon approached, Tourville’s mother, Laura, and her husband, David, began to think about coming to the Outer Banks to participate. David urged Tourville to consider running. Eventually, he relented.

While he was already active in Ironman competitions, the first Outer Banks race would be his inaugural marathon event.

He enjoyed the race and competition so much, he began to enter other marathons each year. But he comes back to the Outer Banks race every November.

Tourville has run 11 full marathons (2006-2016) and this year, a half-marathon at the Outer Banks competitions.

He dialed his 2017 effort back because, at age 45, he re-enlisted in the U.S. Army after a long break  — he served eight years on his first active duty stint — and the sudden return to combat arms training didn’t allow him to prepar for the full marathon.

Still, he is among a very small group of people who have run either a full or half-marathon every year since the race began.

It’s what comes next, however, that appears to make Tourville a one-of-a-kind OBX Marathon participant.

“About two years after the first marathon, they added an 8K race the Saturday before the marathon and I decided to run that also. Then they added the 5K and I’ve run all of those,” he said.

While records going back to 2006 are not perfect, race organizers were close to 100 percent sure that Matt Tourville is the only person to have run every one of the two Saturday races, and at least one of the Sunday marathons each year.

And while the paper trail may be a little fuzzy, Tourville has the bling, in the form of close to 60 medals from the Outer Banks races, to prove his participation.

In addition to medals for running each race, he also earns medals for placing in the 5K and 8K in his age or experience group, as well as earning “challenge” medals for running one or more of the Saturday races and following up with the full or half-marathon on Sunday.

We asked Tourville why he put some much effort into the Outer Banks marathon weekend.

“It was my first race, but I also think this is the best marathon there is. The course is phenomenal, incredible, even. It’s a Boston Marathon qualifier, and it needs and deserves more people to run this event. Runners don’t know what they are missing.”

Tourville has the bling, in the form of close to 60 medals from the Outer Banks races. 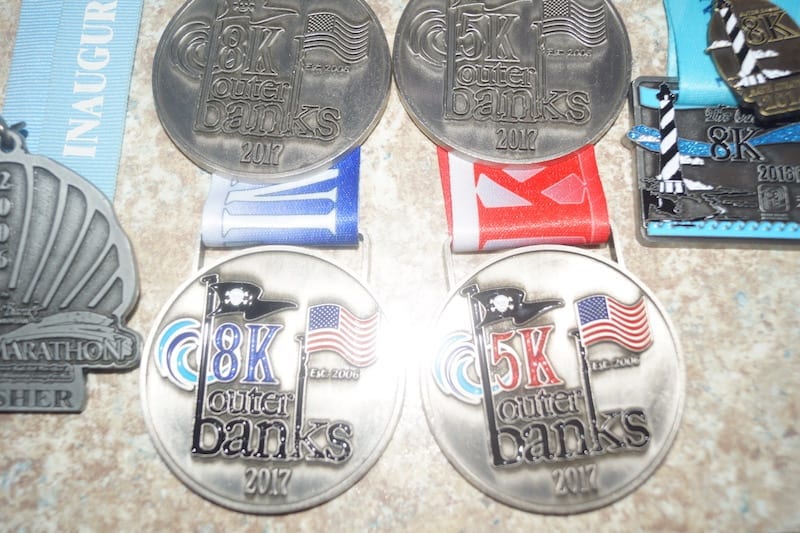 Tourville said he hopes they advertise the marathon weekend more, especially at other races.

“The Virginia Beach Shamrock Marathon had a booth at this event, and I’ve seen them at many other races up and down the coast, handing out their green cups. I hope the OBX organizers can start showing up at these races and grow this race. It can easily handle twice as many runners, especially with the rental homes being available.”

We asked Tourville what his favorite part of the race was, as well as the hardest portion of the course.

“My favorite part is also the hardest part,” he responded. “The Nags Head Woods part of the course is beautiful, but you are running through soft-pack sand and the terrain is not level. Every year I hear racers new to the event use every expletive they know when they come to that first kicker in the woods because they envisioned a flat race on a level sandbar.”

Tourville also touted another part of the race: “I love running around the Wright Memorial. It’s so cool. It doesn’t get any better than that on any other course I’ve been on.”

When asked about the bridge at Pirates Cove, with its steep climb, Tourville shrugged it off.

“It’s a bridge, it’s concrete, so it’s tough on your feet, and sometimes the wind beats you up, but the view is gorgeous on a good day and it is what it is.”

But the finish is another part of the race Tourville says “is far better than any other race I run. You wind up in downtown Manteo, on the water, and there are restaurants open and places to eat and walk around.”

His wife, Sabine, who has run four half-marathons here, volunteered at the finish this year and echoed Matt’s thoughts about the quality of the Outer Banks Marathon, “So many people crossing the finish kept telling us how beautiful the course was, how much they enjoyed the scenery and how fun downtown Manteo was for the finish!”

We asked the Tourville’s how the race had changed over the years. He laughed and recalled the 2006 inaugural race. 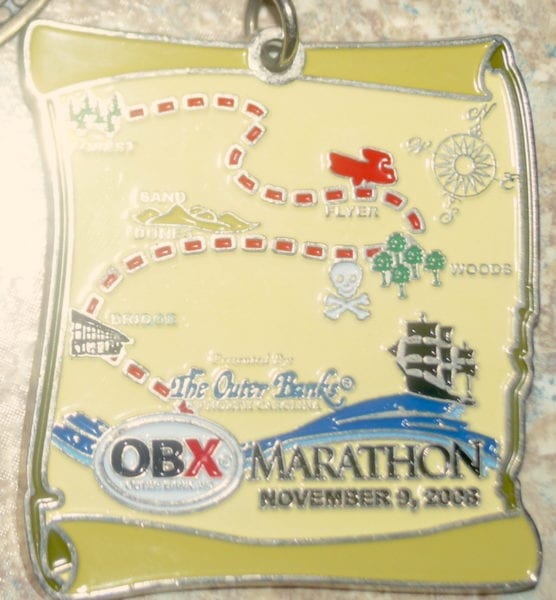 A medal from his first marathon, the first OBX Marathon

“We came down on Friday and after driving around an hour, we found one restaurant open. On Saturday, I was looking for pasta for dinner (a popular food consumed by long-distance runners the night before races) and the only place open was Argyle’s.

“The following two years a few more places stayed open, but after that, more and more restaurants continued to be open and now we have a lot of choices both nights, including plenty of places to get some pasta. And even after the race on Sunday, we can grab a beer and hang out with our friends.”

Locally, Tourville has grown close to Kathy Sparrow, a family friend before he began running, as well as Patrick Pritchard of the Dunes Restaurant.

They all hang out, and the Tourville’s stay in one of Pritchard’s rental homes on the Beach Road in Nags Head.

But they’ve also established some favorite haunts over the past 12 years.

Sabine brought up Capt’n Franks as a favorite stop. “We love Harvey Hess, the owner, and he’s very familiar with Munich, where I’m from, and the type of sausage I love. Like those snap dogs they make with the Weeping Radish.”

The hospitality of the Pritchard family has already been mentioned, but Tourville said that friendship makes coming down so much more fun. “Last year we hung at Lucky 12 on Sunday night and we may repeat that this year.”

Paul Charron, of the Lost Colony Brewery and Restaurant, is another favorite.

“After my first race, we went into his place, it was called Full Moon back then, and he met me as I sat down. I ordered a Guinness and he took care of me. We have now made this a tradition as our group of eight to 10 people have had lunch and beers there after the race for 12 years in a row.”

Having accomplished all of the above, I was scared to ask if Tourville had any other goals in mind.

The Outer Banks Ironman competition is on the list.

“I’ve spoken to the organizers about something really different next year,” he teased.

And so, I “bit” and asked for more information.

“I’m going to try to run all four races — the 5K and 8K on Saturday, and the half and full marathon on Sunday,” he announced.

“Aren’t you already beat up enough from the three races you do?” we asked.

“Yes, but it’s worse on Saturday. I don’t just try to run the 5K and 8K, I try to place in both in my category. Hardly anyone runs in both, so after the first race, I face an almost entirely fresh group of runners in the second event. But I usually manage to place first or second and do the full or half the next day.”

Tourville also noted his times in all the races, some ten years after he started, are faster now than they were when he started.

With a little help from his friends, in this case, the race organizers.

“I already run the two races on Saturday, so that’s doable. To pull off the full and half-marathon, I’ll need to run the full marathon first, and then, as soon as I finish, I’ll need an escort, maybe a police motorcycle, to take me back to the half-marathon start, get officially started, and finish in Manteo before the official end of the half, so all my times are recorded.”

And there you go.

But for an Army mountain warfare infantryman, who regularly scores 30 to 40 points above the physical training standard set by the Army to be a Master Physical Trainer, we’re betting on Matt Tourville.