They’re back! Snowy owls return to the Outer Banks 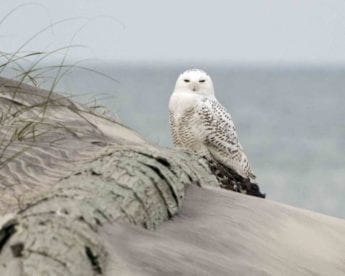 Returning to scanning the Outer Banks dunes, cane laying on the same, he caught the young man off-guard as he stood next to his Zeiss 20×60 zoom-spotting scope attached to a Manfrotto tripod nonchalantly eating a sandwich.


Okay, so a Snowy Owl is not a Moby Dick. But for some it is close, and a reliable sighting may cause birders to quickly change plans and head out in hope of a glimpse and some photos of one of the most sought-after birds in the Carolinas.

And yes, Snowy Owls have returned to North Carolina with several reports already, including at the Pea Island National Wildlife Refuge.

Pundits in the birding world a few months ago started making bold predictions that this winter would be an another banner year for seeing Snowy Owls in the United States in numbers similar to those of the winter of 2013-14, when hundreds descended and at least 15 were seen throughout the state.

Daily reports throughout large parts of the northern United States are confirming predictions of what is called an “irruption,” or “invasion” year.

The potential nesting areas for Snowy Owls in the great north are so dauntingly large that finding nests can be overwhelming, making predictions difficult. One indicator that may help predict a large number of owls descending is when lemmings, small arctic rodents, have a highly productive breeding year. Lemmings are the Snowy’s preferred food source, and when they are in large numbers, more young owls will successfully fledge and disperse widely, including to points far south. 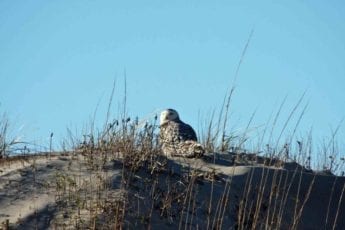 This summer, reports on the Project Snowstorm website indicated that a lot of Snowy Owls were seen in the Ungava region of northern Quebec. Many may make their way to the south.

An excellent source for both North and South Carolina for tracking information on Snowy owls as well as lots of other species is the Carolinabirds Listserv.

The first Snowy report of the season on it was Nov. 17, when Nathan Gatto, owner of the Wright’s Birding Center in Winston-Salem, posted that he received a call at the store that a Snowy Owl was seen and photographed off Stratford Road in Winston-Salem. He confirmed that it was indeed a Snowy Owl.

The intrigue and excitement moved east. The Pea Island National Wildlife Refuge Visitors Center has a clipboard by the door where people can write in the names of interesting birds and the date they had seen them.

On Nov. 20, Steve Shultz of Apex, writing about a King Eider that had been seen in the Oregon Inlet area, added to his post: “Also noted on the clipboard of sightings at PINWR (Pea Island NWR) the tantalizing suggestion of a Snowy Owl report of one seen in the general PINWR area on, I believe Friday (Nov. 17). So you might want to keep a look out for that as well, should the notation be accurate and repeatable.”

Things really heated up on the listserv Dec. 15 when Jacob Farmer posted: “Nathan and Sarah Gatto asked me to pass along that they found a Snowy Owl on the dunes just north of the New Inlet (Split Pea) bridge on Highway 12. It has since flown from the dunes and landed on beach in the same general area.”

Nathan and Sarah are regular birding visitors to the Outer Banks. He described how he discovered it: “(We) spotted the Snowy Owl while driving back from Avon. It was sitting on the dunes and looked very similar to a trash bag. After turning around a few times, we decided that it was likely a Snowy Owl. We parked at the north end of New Inlet and confirmed it.”

Jeff Lewis, the Outer Banks’s top birder and photographer, posted that evening that “the Snowy Owl was seen by many this afternoon as it worked its way north. It was almost to the north end of north pond at dusk.”

The next day brought some disappointment as Jim Gould of Southern Shores reported, “At least five people, in separate search parties, have been scouring Pea Island National Wildlife Refuge for the Snowy Owl that was seen the last two days. No luck so far, after having looked from Coquina Beach near Bodie Island Lighthouse all the way to the northern end of Rodanthe.” There have been no sighting reports on the Outer Banks since.

Moving back west, on the Greensboro Christmas Bird Count held Saturday, Dec. 16, part of the report included “a Snowy Owl, found near a runway at the Piedmont Triad International Airport in count week, and later picked up by a Fish & Wildlife officer and taken to the Carolina Raptor Center in Charlotte, where it was found to be underweight and infested with mites but otherwise in good health.”

Michele Miller Houck, associate executive director for the center, confirmed that this bird was doing well, and they have plans to release it farther north, possibly in Minnesota. A few days earlier, another Snowy was found in the Pee Dee Wildlife Refuge that appeared to be sick, was captured and transported to the raptor center.

“It was emaciated and suffering from a lung infection and did not survive,” she said.

“This is amazing,” Houck said. “In our 40 years of existence, we never had to rehab a Snowy Owl. This year we have already received two.”

Another report was from Myrtle Beach where a Snowy Owl that appeared to have medical issues was captured and transported to the Center for Birds of Prey located in Awendaw, S.C.

Jim Elliott, its executive director, confirmed that the bird when brought in was laced with parasites but otherwise in good condition and was doing well. He said they are working with the Project Snowstorm group on securing its release farther north. This was also the first time that a Snowy Owl appeared at the center. 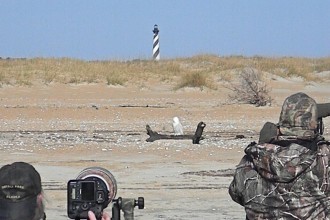 Snowy owl perched on a log at Cape Point over Thanksgiving 2013. (Jay Ross)

Snowy Owl mania on the Outer Banks kicked off in mid-November of 2013 when one was seen at Cape Point on Hatteras Island.

Hundreds made the trek to see the bird, which hung around until a little beyond mid-December. Then on Dec. 27 at South Point on Ocracoke, one was seen and photographed perched on a dune and was seen regularly afterwards.

As sunset approached on Dec. 30, the day of the Ocracoke Christmas Bird Count, several observers were looking at a distant Snowy on the South Point flats when a second owl landed next to it, confirming there were two Snowy Owls on Ocracoke. The owls hung on all winter and were seen by several hundred observers and photographers. The last sighting was March 8.

Venturing into the United States is entering dangerous territory for owls. More than 100 years ago, these owls were routinely shot and often taken to taxidermists. Gaining protection via federal Migratory Bird Treaty Act in 1918 did not mean the end of dangers. Electric wires, moving vehicles and poison by pesticides are some of the biggest threats, as they are to other birds of prey.

A word about birding etiquette. Snowy Owls may appear to tolerate human presence –perhaps because we do not look like an arctic fox.

Like all birds, they should not be harassed. Even though they are reasonably tolerant of disturbances (they favor noisy airports where prey is readily available), one should not get too close as they will flee.

A flushed owl is vulnerable to being struck by a vehicle, crashing into a hot power line and even attacked by a Bald Eagle or Peregrine Falcon lurking in the area. Flushing a resting owl is not good for it and will deprive others from seeing it. They can be enjoyed from a safe distance.

If you notice a bird that appears to be hurt, you may contact the Carolina Raptor Center at (704) 875-6521, ext. 111. Information on rescuing an injured raptor can be found here.