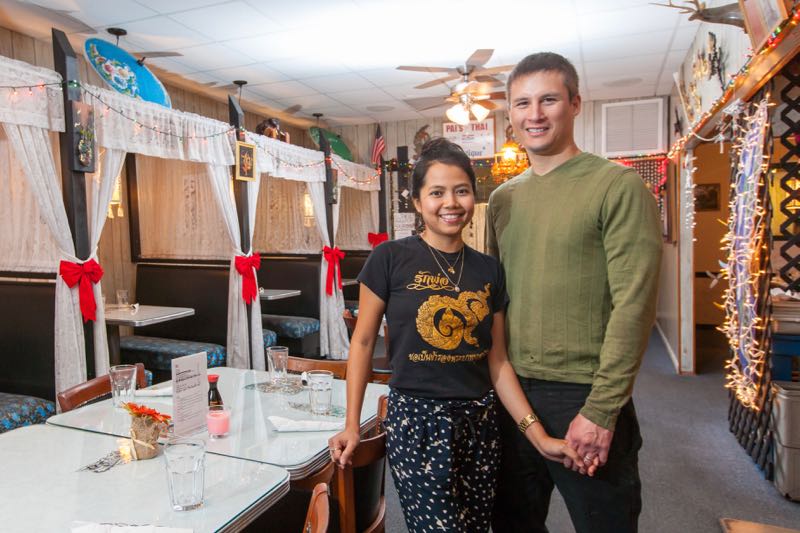 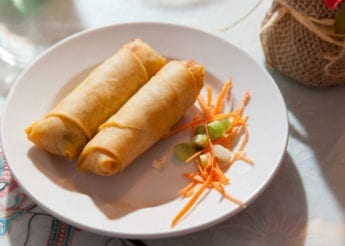 Since Elon Musk isn’t interested in developing a time machine yet, we must use our imaginations and memories to try to conjure up what the restaurant scene on the Outer Banks was like in the mid-1980s.

The fare was predominantly seafood, a bit of Mexican and places where a decent steak could be had. But nothing too exotic.

Then one day, a couple of brothers from Thailand, Vachara “Jimmy” and Vachira “Ta” Ngeonjuklin, decided to give it a go, and The Thai Room was born.

Of the restaurants in that class of 1985, few still exist in their original spot. Many more have opened and closed and have become something else, whether because of the whims of the owners or the whims of the economy.

Still, The Thai Room carries on. What are the odds it would still be a going concern, in the same family, over 30 years later?

Now, Ta has passed away and is missed, Jimmy is enjoying retirement both here and abroad, and his son, Scott Ngeonjuklin and Scott’s wife Pai are carrying on the family business. We checked in with Scott and Pai to catch up on the transition.

Jimmy and Ta were born into the food business in Bangkok, where their mother ran a noodle shop.

Ta sought opportunities in the United States and landed a chef gig in Washington D.C. Jimmy, having finished college with a degree in accounting, followed shortly thereafter, and the two worked in various DC restaurants and bars for over a decade.

While working in D.C., Jimmy married and Scott was born. But the pair parted ways. “Mom was British. I grew up with my mother in Northern Virginia,” Scott said.

Jimmy found his way to the Outer Banks, working for a time under the late Mike Hayman at the Seafare, from whom Ngeonjuklin learned much about organizing a restaurant.

He looked around and decided what the Outer Banks needed was a Thai restaurant. He brought brother Ta on board, and took over a space in space in Oceanside Plaza that had been a sub and pizza place.

The going was challenging at first, introducing an exotic cuisine to a beach town. Early diners were often more interested in and familiar with Chinese offerings, which the brothers had added.

Through perseverance, that began to change. With Jimmy’s engaging charm and Ta’s dishes, the customers were beginning to appreciate the differences and embrace the Thai end of the menu.

Scott Ngeonjuklin started coming down to help his father with the restaurant when he was 16. He admits the surfing lifestyle was a big pull.

“Teenage boy … use your imagination,” Scott says with a laugh. “Play during the day, come in and help my dad in the night, sometimes till three in the morning.”

As Scott grew up, he had only a little knowledge of the Thai language since his parents spoke English in the home. But he would soon be immersed in it.

In 2000, Jimmy arranged for Scott to visit Thailand, staying with extended family. “He put me with a family that didn’t speak English. For 6 weeks! He gave me one book and said, good luck!” Scott said, “It was a great learning experience. And being around it all day, you pick it up. And it’s important to know your heritage.” 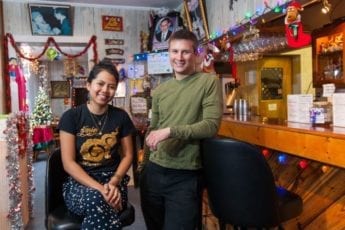 Hand-lettered signs and the photo of late Thai King Bhumibol Adulyadej, Rama IX, in the corner above the cozy bar-foyer.

In the summer of 2003, Pai Sittichai, a college student from southern Thailand, arrived in Kill Devil Hills as part of a student exchange program, working at 7-Eleven.

She was walking with friends when Jimmy noticed them and saw a familiarity. “They look like Thai,” Pai recalls Jimmy saying. He introduced himself, speaking in Thai, and offered to take them to his restaurant. Scott happened to be there that day and eventually the two hit it off. Pai said, “I see him at the bar, and he looked American. I thought he was a customer.”

As the romance grew, the two completed their college educations. Scott graduated from Virginia Commonwealth University with a chemistry degree and Pai graduated from her college in Bangkok with a degree in mass communications and public relations.

They were married in two ceremonies. The first here in the States in 2005 and a second ceremony, in Thailand, in 2007, which was attended by 30 friends from the States. Scott says, “Dad was happy, ‘I found him a Thai girl!’ ” 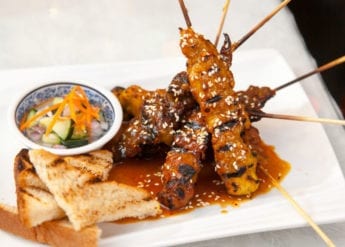 After graduation, Scott and worked full time at the Thai Room for two and a half years alongside his uncle Ta. “He taught me everything, like the sauces, just learning how to balance the flavors.” He called Scott “Junior.” Pai explained Ta’s teaching style. Ta would point to his head and say, “Junior, right here. Don’t write it out. I want whatever I taught you to be right here.”

And Pai learned to adjust to a new culture. She explained that she was taught in her schools to read and write English, but conversation was not practiced. “Dealing with Americans, when I first came here, I cried. We’re shy and with the Thai accent.” She recalled even her first conversations with Scott were done mostly with sign language.

Looking to gain a broader view of the restaurant world, Scott headed back to D.C. There he gained corporate experience and managerial skills. “But, D.C. is just too congested,” he said. “You learn to manage a large a staff, but the area is tough.”

Scott had options, but only one of them had his attention. Jimmy, having put in 30 years here, 12 years in D.C. and the time in the noodle shop in Bangkok, was eyeing retirement. 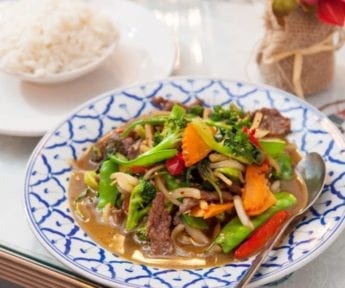 “Dad’s really old school. He told me a long time ago, unless family takes it over, he wouldn’t sell it. He said ‘Hey, its blood, it’s family, keep it going.’ If I decided not to take it over, then when the lease is over that’s it. So, he’s glad to see it keep going, and he’s glad for no more headaches,” Scott adds with a knowing grin.

Pai feels a deep emotional connection with the Thai Room. “It’s not just another restaurant, it’s very special. It belongs here so many years, it’s now a part of Outer Banks culture. It is very special and unique to have this place. We have to keep it going, keep the good things.”

“January will be the start of our third year as owners,” Scott said. Jimmy typically comes back to the Outer Banks in May and stays through to nearly September and spends the rest of the year enjoying the peace and quiet of his home in Thailand.

On coming back, Scott says, “It gives him something to do. He pops in and enjoys himself. He’s very relaxed now.” Scott imitates his father, “I can relax, don’t have to worry about numbers, I just come here now to cut, cut, cut, and talk. Now you’re going to lose your hair and look like me in 10 years.”

The ceramic cat still waves from the shelf in the bar and the magic snake dragon of Thai mythology is seen around in various motifs.

Scott and Pai are keeping the things their customers know and love about the place, especially the smiles and warm charm.

But they are making one major change, and that is keeping the Thai Room open most of the year, only shutting the doors a week or two at a time. That’s good news for us.

On parting, we ask if the young couple has children. Scott answers, just two dogs. Pai says, “I have almost a thousand kids in Thailand.”

It turns out the restaurant helps substantially to support a school in Pai’s home town of Trang, not far from Phuket. Her aunts and uncles there are retired teachers and they tend to the unmet needs of the school children with donations The Thai Room provides on a regular basis.

“You know working in a restaurant all the time, I can’t imagine someone going hungry,” Scott said, remembering trip to Thailand and time spent with Pai’s family there. “In Thailand, a little bit helps a lot.” The couple also gives locally to the Food Pantry.

Of course, it would be silly to visit the restaurant without having a taste.

Over previous trips, we became big fans of big fans of their Dom Hak Gai (your spelling may vary) the soup of chicken, coconut milk and Thai spices, as well as their take on Laab, the aromatic ground pork dish flavored with lime juice. 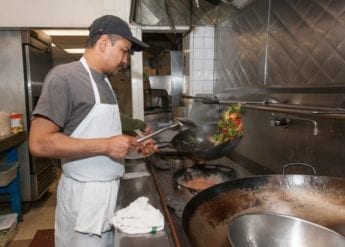 Alan Sittichai, Scott Ngeonjuklin’s brother-in-law, stir-fries an order over one of the kitchen’s special wok burners.

Also, a favorite in our circle is the Pad Thai, rich, fragrant noodles festooned with bean sprouts, scallion and a sprinkling of peanuts.

On this night however, we made our way through appetizer servings of Spring Rolls and Thai Sticks, a combination of curry beef, pork and chicken satay with a peppery, gooey peanut sauce. For entrees, we chose the Pork in Garlic Sauce and Beef with Basil Chef Special.

It is said Thai cuisine is a balance between the five tastes of bitter, salty, sour, hot and sweet. That was certainly true of the dishes here. We ask for the dishes to be prepared medium on the heat scale, and asked for additional spice we can add on our own.

Some of us just enjoy testing the edge of the envelope, and the additional hotness packet allows that without putting a shared dish out of bounds for our less adventurous dining companions.

This is handy to know because the entrees are sized for sharing. All are pleasing to the eye, the proteins sliced thin and tender, the vegetables fresh and done but still crisp, and the taste savory and rich.

There was no room for the sticky rice with mango, but it made for spectacular breakfast the next morning.

Thai dishes often make use of the fast, high-heat, stir-fry method in woks. Special burners are installed in the kitchen which can quickly add a blast of fire to the wok as needed. But the prep is time consuming and labor intensive.

Scott says that he can handle the crowds in the winter with a staff of about six. That number swells to 30 in high season, with sometimes six or seven people just cutting meat and vegetables.

Perhaps Scott’s chemistry degree helps him in balancing those five taste elements, but we think maybe it is in the blood. Scott says, “With this type of cuisine, there has to be a passion, a desire, and this is what I love doing.”