Pay-to-park under consideration for Currituck beaches 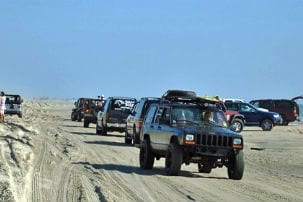 The beach is a public right-of-way. (Coastal Review Online)

The Currituck County Board of Commissioners appears on the verge of implementing a plan requiring a pass to park on the county’s beaches by as early as this May.

“This isn’t going to prevent people with four-wheel drives from driving up to Carova for sightseeing,” board Chairman Bobby Hanig said Monday.

“The end goal is to limit the amount of people in the 4×4 area, and somehow to eliminate congestion on the beach.”

Reaction from those in tourism-related businesses has been guarded, as the details of the proposal are just getting out and are still being worked through.

“We obviously support our elected officials, because we live and work here, in trying to deliver the best quality of life to our residents and property owners,” said Clark Twiddy of Twiddy and Co., which manages a number of vacation rental properties on the Currituck Banks.

“Those of us in the tourism industry always appreciate a good period of due diligence and a chance to participate in policy formulation that impacts our visitors’ experience.”

Under the proposal, which Hanig said they hope to have approved by March, visitors would have to pay $50 for a 10-day parking pass or $150 for a permit that would be valid for a calendar year.

No single-day passes would be available, and the rates are not yet finalized, Hanig said. Currituck County residents and anyone who owns property in the county would be given a pass at no charge. Online purchases would not be available, but the idea is being discussed.

The passes would be available only at the county’s visitor centers in Moyock and Corolla and require watching a video before purchase, similar to what is required to buy an ORV permit in Cape Hatteras National Seashore.

“This is about educating beach drivers, where to air up and air down, what to do and what not to do,” Hanig said.

Visitors checking in on Saturday or Sunday would have to make another stop, adding to an already long day of travel and more hassles, according to several members of the rental industry.

Others said they are already dreading the reactions of renters who have paid in full for their vacations this summer, then having to be hit with another bill of $200 to just reach their house if there were four vehicles staying there.

One part of the proposed regulations is that the passes could not be transferable from vehicle-to-vehicle.

Hanig added some of the details still need to be worked out by the county’s staff, and any ordinance changes are still in the drafting stage, but they could be ready for consideration as early as the Feb. 19 meeting.

If all goes as planned, the new rules would be implemented starting May 1, Hanig said.

Hanig and Commissioner Bob White, a Corolla resident, spearheaded the effort to find another way to cut down on the amount of vehicles and other problems on the Currituck beaches.

This past year, the county passed a rule requiring drivers to drop the pressure in their tires to below 20 p.s.i. before driving on the beach to reduce problems of the ORV ramps being torn up and vehicles getting stuck.

A ban on digging large holes by beachgoers was also implemented to prevent vehicles on the beach at night from being damaged and after recent incidents elsewhere of injuries or deaths from collapsing holes.

Traffic is also banned from the hard-packed sand along a four-mile stretch between the North Beach Ramp and Milepost 17 from 9 a.m. until 5 p.m., beginning the Friday before Memorial Day until Labor Day.

That change is intended to keep the foreshore, or the beach closest to the ocean, safe for beach-goers by pushing traffic up to the toe of the dune line. It doesn’t change the rules for parking, which will remain in the center of the beach.

The parking pass was initially brought up at a work session before the board’s Jan. 2 meeting.

Discussion at the time centered on requiring the pass for access to all Currituck beaches, not just the 4-wheel-drive area, passes would be linked to specific vehicles with no limits for county residents, while non-resident property owners could get up to four passes at no charge.

Handling those engaged in contracting, fishing or hunting activities was also talked about during the work session, along with guest passes and off-road vehicle rentals.

It was suggested that rental ORVs be charged a fee and permitted annually in the same manner as horse tour vehicles.

Further discussion took place at the commissioners’ annual retreat on Jan. 26, including talks about issuing passes just to drive on the beach. But Hanig said it would have been more costly to implement and commissioners have circled back to just working on a parking pass system.

The Currituck County Sheriff’s Office would be responsible for enforcing the permits. Deputies have been using open, “side-by-side” vehicles to travel the beach during the day as part of their patrols.

“It’s going to be a longer day for deputies working the beach, so we have set aside money for additional regular vehicles for patrols,” Hanig said.

He added that Sheriff Susan Johnson said her department would not require additional staff to enforce the permits.