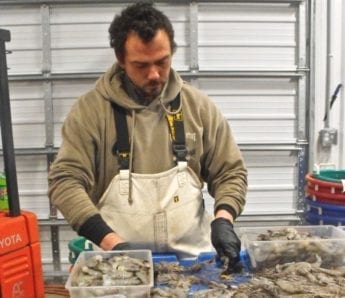 The commercial fishing village of Stumpy Point begins coming alive about 4:30 each morning when captains and crew members head from their homes to the harbor to start another day. Within an hour, a parade of boats head from the docks out into the Pamlico Sound or even offshore.

Stumpy Point, first settled in the late 1700s, is 15 miles from the nearest gas station and mostly is confined to just one road that wraps around about a quarter of Stumpy Point Bay, which spills out into the Pamlico Sound.

The other three sides are  hemmed in by Alligator River National Wildlife Refuge, so a bear getting into the trash or a coyote trying to get to chickens is not an uncommon occurrence.

It is slow to change and has long been a fishing village whose importance has evolved from the days when it could only be accessed by drummers who came to the docks to buy seafood to be picked up by barges that moved it closer to the northern markets where it was headed.

Later, there were a number of very large fishing boats docked at wharfs dotting the length of the village and enough was shipped that it remains on the National Marine Fisheries Service’s list of seafood ports. 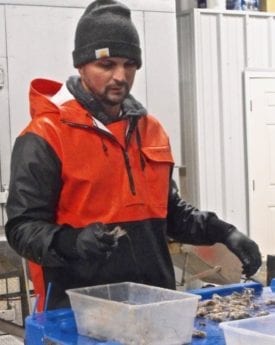 But since the closing of Roger Best’s Trinity Seafood in 1997, it has been without a fish house. This has forced fishermen to land in Wanchese or Engelhard — both 25 miles away — or dock in their own harbor, offload, then drive their catches to  fish houses in one of those villages.

That changed recently when Luke Midgett bought and razed the old Trinity building and built a new facility with 2,400 square feet on first floor and about 1,200 on second. Named N-Seine Seafood, it is furnished with up-to-date equipment as well as new dockage.

Midgett’s ancestors were among the first to inhabit what would become the village in the late 1700s, and Best, the former owner of Trinity, is his uncle. In turn, Best’s uncle, Alton Best was one of the original incorporators of the North Carolina Fisheries Association in 1952. Commercial fishing has long been in the family’s blood.

Midgett grew up in the village where crab pots, boats, flamingos and rose gardens decorate the yards. He lives there with his wife Trudy, and his children, Lexie, 14 and Noah, 6.

But they are not his first boats. Midgett, 38, fished with his father, John Calvin Midgett, before buying his own boat at the age of 13.

The expanded venture includes 10 full-time employees including himself and his jack-of-all-trades Curtis Price.

Most of the full-time employees work on his boats and at least six of them, including himself, hold commercial fishing licenses. He also hires part-timers for processing, primarily to head shrimp and to pack catches.

The addition of any jobs is welcomed in the village, which has a population of less than 200 including children and retirees. Until recently, the area zoned commercial on U.S. 264 was empty except for the NC Forestry Service. Lost Colony Brewery and a tea-maker also are now doing business there.
Midgett sells to the public, local distributors and ships some out of state.

“We try to finish up the week’s work on Saturday so that we can take at least one day off,” he said.

But fishing doesn’t occur on a whim; migration patterns, temperatures and regulations all help dictate when fishing boats ply the waters. While he buys an assortment of seafood from other fishermen, his boats primarily depend on catching crabs and shrimp.

Recent efforts to substantially curtain shrimping, if successful, could have hard impacts on his family, business and employees.

“If they shut down shrimping or curb it back drastically, it would devastate me,” said Midgett. “Crabs were not good last year, but we had shrimp to work on. If we didn’t have that (shrimping), I would have to sell off everything.”

But unless that happens, Midgett and his merry band of fishermen will continue to harvest wild seafood so that more of the public has access to it. To contact him, call 252-475-8818.