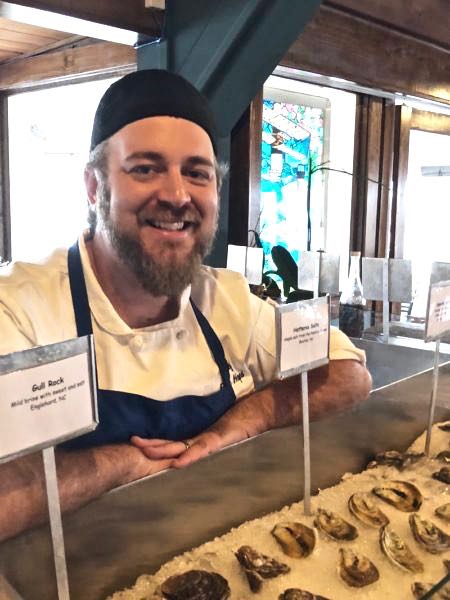 What was your path like becoming a chef?
My parents had Upper Crust Bakery, first in Winterville and then in Greenville, from when I was four until I was 24, so I grew up in the bakery making cookies. “We can’t give an allowance, but we can give you a job,” my dad said. Banana bread, pumpkin walnut bread and cookies was my entire childhood. Then I went to culinary school.


So how did you end up in the OBX?
I went to Johnson And Wales in Norfolk, had a friend from my hometown there. I decided to do my internship at The Blue Point and Ocean Blvd, back when John Power & Sam McGann owned all three [The Blue Point, Ocean Blvd., and then recently opened Goodlife Gourmet].And after that?
I followed Chef Chuck to open Meridian 42, did even years there, then Fin And Claw in Corolla, then Blue Moon to Blue Water.

Any defining moment when you knew you were going to be a chef?
When I was a kid and I watched my dad passionately make bread to take care of our family, I knew I wanted to be in food. My brother was good at fixing the go-cart and the lawn mower and he’s a mechanical engineer now. I sat a made cookies since I was four. It stuck with me.

What’s in your fridge at home that you might not want anyone to know about?
Probably the 50 kinds of either pickled peppers or hot sauces going back a LONG time. There’s probably some pickled jalapenos in the way, way back that I grew when I was in high school, but I can’t get rid of them -they’re pickled.

What other seasoning/spice/technique is top in your culinary arsenal?
Hot salts! I take my peppers that I grow, I grind them up and make a seasoning salt out of them. Different kinds: I have my green peppers mix, my red pepper mix, and then individual peppers too – Ecuadorian Lemon Pepper, Cayenne….

When you’re not working, where can we likely find you?
In my garden in Jarvisburg. I grow lots of hot peppers for the hot sauces and pickling,… tomatoes, basil.

So do you garden year-round? Winter time?
Definitely heavier in the Summer, but I do have some Toscano Kale, some garlic and onion now. And I do have lots of fruit trees -blueberries, figs, apples and pears…peaches. Then I have the farm in Belize.

(Interviewer triple take: What? What? What?) Belize???
Yeah, we bought land in Belize (20 acres), put in 2000 Cacao plants last November, some coffee, mangos, turmeric. Our next trip we’ll build a thatched roof house so can stay on the property and not have stay at a hotel down the road. We’re going to plant as much cacao in as I can. Where we bought is the beating heart of the Belize Chocolate industry. We trying to do everything as organic as possible.

Any favorite OBX restaurant or hangout?
I don’t go out much, but my new favorite? Masala Bay. It gives you flavor you normally don’t get here in the Outer Banks. Ethnic food is really lost here…and it’s on my side of the bridge!

You do a lot of specials here…anything stand out as one of your favorite things you’ve made?
Tough question. I’ve got volumes of specials over the years. But Bacon Jam comes to mind. We had it on our Oyster Roll, a topping for fish, I love it on a grilled cheese sandwich. Any way you can introduce bacon into your mouth without even having to chew is good. It takes half the work out of it -can sip it through a straw!

And I would like to have dinner my with my grandma, because I just lost her. She was a very classy lady; taught me the etiquette around food. It was hard to see her go.