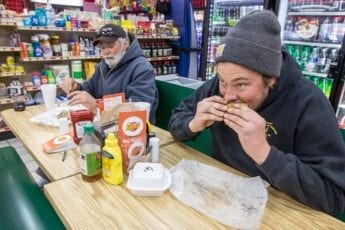 Louie Hoppe, right, enjoys breakfast with David Keavy at the Get-Go in Harbinger.

First a couple of disclaimers.

This is not an article about health food, though that is a subject we will be getting into more often and on a later date so hold your horses. This is about a guilty pleasure.

Most folks we observed imbibing in biscuits have jobs demanding physical labor or enjoy an active lifestyle. We are sticking by this.

In no way do we at The Outer Banks Voice condone the actions of any person who would, after reading this, decide to go grab a biscuit, get in their car and then eat it while driving.

That is a no-no. We will give you the stink eye if we see you doing it. Your vehicle has a drink holder but it does not have a bistro table. We checked.

If you eat in your car, fine. Just make sure the transmission is locked in park. 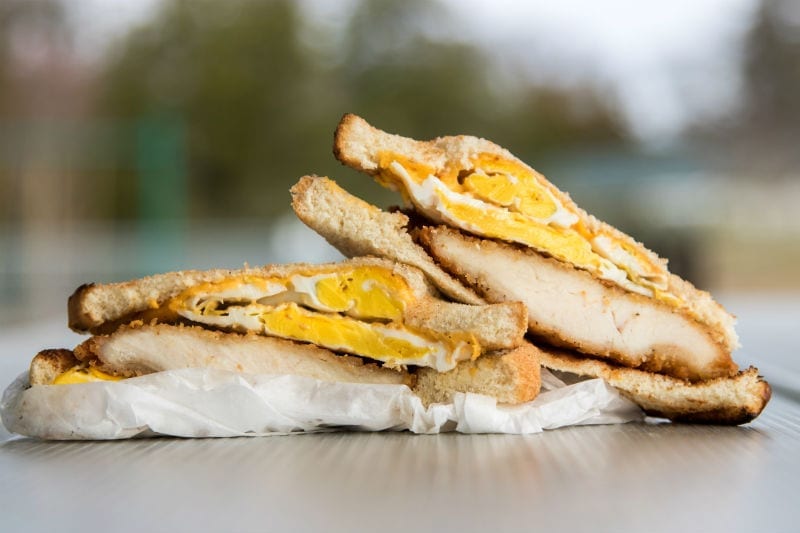 Egg, cheese, and breaded chicken breast on toast from the Get-Go in Harbinger.

Get-Go
It’s a work day in Harbinger, North Carolina. At Kitty Hawk Iron & Steel Works, the welders start heating things up at 7 a.m. About an hour later, there is a need for more fuel.

“Yeah, we work till we get hungry, till we can’t stand it,” says Louie Hoppe, a second-generation welder in the business started by his late father, Lou Hoppe and partner Jessie Waters. Hoppe and a buddy from his crew scoot a mile down Caratoke Highway to the Get-Go Convenience & Deli to fill that need for a time efficient breakfast.

At the Get-Go, situated in an Exxon service station, the staff has have been at work quite a bit earlier. When they open the doors at 6 a.m., the biscuits and bread and all the other components are in place and the toaster is ready to supply the masses with hot breakfast sandwiches and coffee.

Hoppe says he stops in there about twice a week. Other days he may be on a truck, delivering products or picking up materials, and at breakfast time he has favorite places he knows where he can reliably pop in for a quick treat and then get back to work. “We like Stop N Shop, Barrier Island Bagels, too. There are lots of places.”

One day, Hoppe might have a sausage, egg and cheese on white toast. On another he may have the same on a biscuit to switch things up. A side of bacon accompanies his order today.

He has a few minutes so instead of heading straight to his truck, he takes a seat in one of the four booths in the store with his friend and co-worker, David Keavy. Hoppe tucks into his sandwich and Keavy anoints a plain biscuit with jelly while the two recall a fun time had on ATVs in West Virginia not long ago.

Three other acquaintances come through with much hail fellow, well-met going on. This is social networking in the very best sense of the term.

And there is just something satisfyingly American about enjoying a bite and a conversation while comfortably wedged between beverage fridges and shelves of cleaning products and motor oil.

It is a convenient truth that the same scene is played in several locations around the Outer Banks and throughout the nation beyond. We are a mobile society and our basic needs can be met at every station.

In nearly all cases it is a modest sized store with a small deli counter, abuzz with hungry and thirsty customers. A place where one can select a biscuit and choose from a variety of fillings and some sides, get it quickly and get out, maybe seeing a friend or two in the process.

Seating may or may not be available and pumps out front are optional. This is the land of the mighty, yet humble, breakfast sandwich. This is the landscape where chicken and eggs come second, cheese if you please and toast is fine, but the biscuit is king.

We dedicate this space to show a little love to the freshly hand-assembled breakfast sandwiches on offer around here. We hereby intend to offer a limited survey, a look around, at some of the efficient comestibles to be had at these local mini-delis, without any silly ranking and in no particular order.

We understand the area sampled is limited.

We are certain similar good morning eats can be had in Corolla, Roanoke Island and Hatteras Island, and we invite folks to make us aware of their favorites in the comment section. We will check them out. 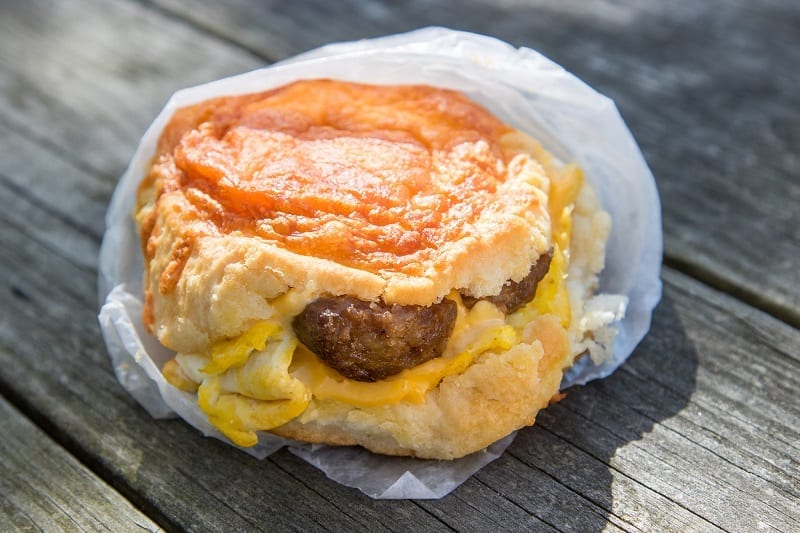 The crowd-sourced review site Yelp shows 417 reviews of B N’ P with an average score of 4.7 stars. Not bad for a little gas station – convenience store – deli counter.

The P part refers to a magazine rack, just like many similar stores across the nation carried until recent times.

The B part refers to the tasty, pillow-like caloric grenades that they sell daily by the hundreds in winter and by the thousands on any given Saturday in July.

Their swag on offer…various t-shirt, shot glasses and koozies…are popular items as well. While they are great impulse sales, many is the traveler on social media vowing to make a special stop on the next trip to fill an order for a friend.

A personal side story, I once found myself being stopped in the grocery store by a pair of vacationers, politely asking if they could take a photo with me and my shirt. I obliged and pointed toward the parking lot with directions on where to get their very own copies.

At morning peak time, the abundance of work vans and 4x4s hints at the blue-collar appreciation for a hot meal that is ready in minutes.

Inside, among the line that can wrap around the store, one will also spot surfers in from a dawn patrol and early rising vacationers in addition to the members of the local work force.

A bonus here is trading in witty repartee with cashier Julia Scheer. Her broad smile and husky laugh does what caffeine cannot.

Don’t blame the staff if you wanted too long to come in. The sausage gravy goes early and when it’s gone, it’s gone. Not long after the breakfast rush, the deli transforms for lunch service and the scene repeats. 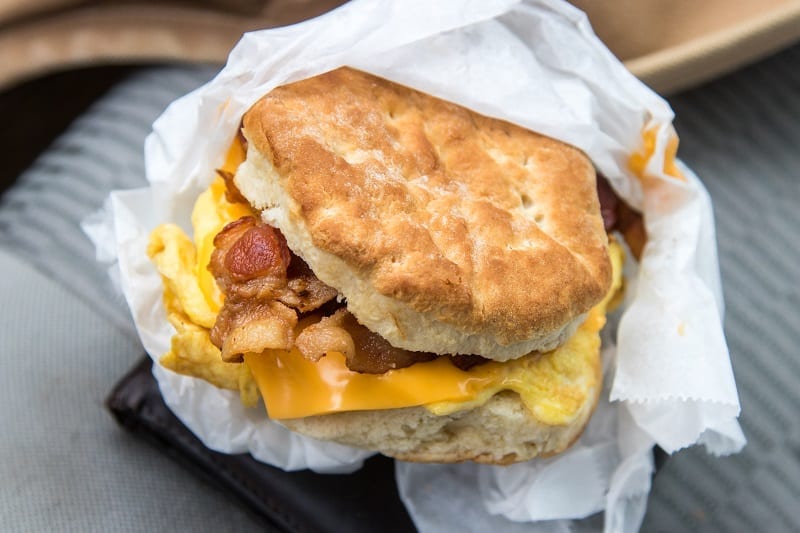 A hale and hearty biscuit with bacon, egg, and cheese from White’s Harbor Grill in Manns Harbor.

White’s Harbor Grille
Situated just west of the Virginia Dare Memorial Bridge on US Highway 64 in Manns Harbor, Whites is a mainstay among hunters and fishermen. Bigger than similar station stores in the area, it serves as the only restaurant in town and is the last convenience store you will find until crossing the Alligator River Bridge, 31 miles west.

Groceries, hunting and fishing supplies and a good -natured staff are found inside. Just beyond the coffee urns is a bright and clean dining area. Several tables plus a bar with stools sit opposite from the kitchen, visible only through a pass. The menu is on the wall. You order and let them know if you are eating in or want it to to-go. But we advise taking a seat and striking up a conversation with your new friends. 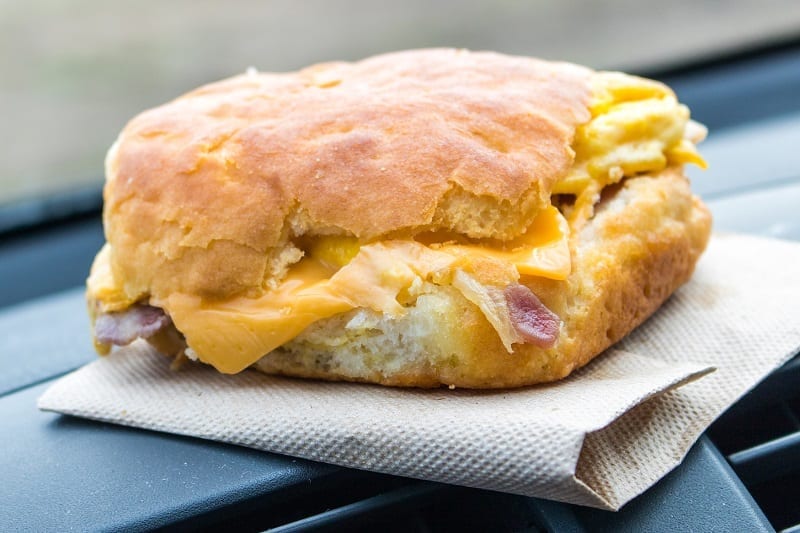 The country ham and egg biscuit with cheese from Cindy’s Kitchen sold at Kevin’s Store in Coinjock.

Kevin’s Store and Cindy’s Kitchen
You can’t drive up (or down) U.S. 158 in Coinjock and not notice the signs for a famous Twelve Layer Cake. But if you look around for the bakery and can’t find it, just pull into the gas station and there it is! Not the bakery itself, that is next door. But the product is all here. The small store is festooned with all kinds of fresh baked goodies, all bound in cling wrap and bedecked with attractive tags with the contents and price clearly marked.

No doubt it is a popular spot and the staff is engaging even if they don’t have to be. Pull yourself past the shelves of cakes, both whole and in sections to the warming display case. Inside is an unexpectedly varied offering of stuffed biscuits. Grab a couple and if you give into that sweet tooth, you can also have pre-wrapped, single slice of that Twelve Layer cake for desert following breakfast. You could do worse. 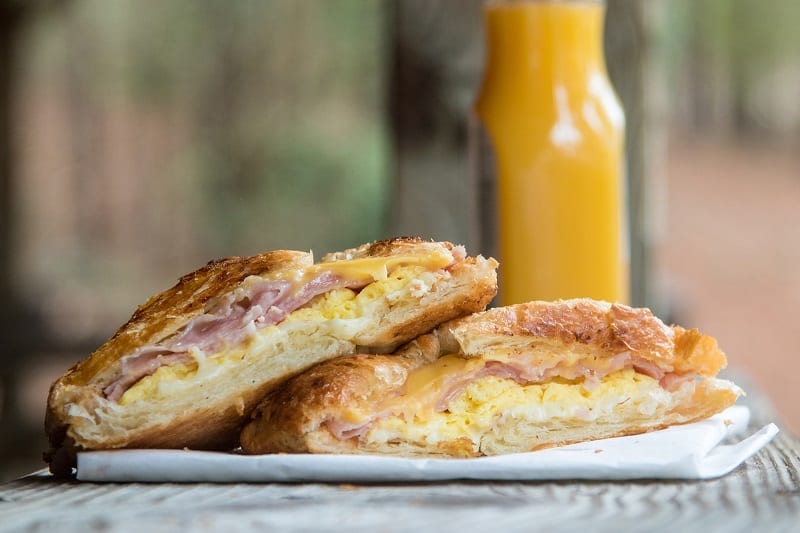 When in Paris…actually Kill Devil Hills…we enjoyed a croissant filled with ham, egg and cheese from Stop N’ Shop.

The store part packs a lot into its square footage including among other things, a huge assortment of flip flops.

The market end has all the staples but also features high end food stuffs, a startlingly wide selection of wines and beers, plus a bevy of hot pepper sauces.

Tucked into a corner on the back wall is the deli counter, behind which is located a substantial kitchen space. The goods here are a notch up on the gourmet meter, with the use of Boar’s Head meat and cheese.

The breads available are biscuits, bagels and even croissants upon which to add bacon, sausage, eggs and cheese. While your order is being made, enjoy a stroll around.

You didn’t know how much you needed that citronella candle until you noticed it there on the shelf, or that Frisbee for that matter.

There is no seating but the beach is right across the street. Say high to the stream of lifeguards coming over from the Ocean Rescue Division headquarters as they pop in to carb-up before taking to their stands. Wish them luck and hope you won’t be needing their assistance later. 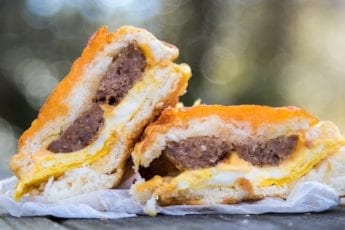 The Biscuit
The biscuit itself is a thing of beauty. They grace the covers of all manner of food publications surrounded with blurbs touting nostalgia for the way your grandma cooked. These biscuit sandwiches are not that. They are tasty, but they sure are humble looking things.

The biscuit’s big sister the hamburger has gone full on gourmet and a day doesn’t go by that our Instagram feed doesn’t feature a few impossibly tall mountains of meat and oozing cheese.

With rare exception, the biscuit sandwich is just not Instagram worthy and not a thing of beauty to anything but your taste buds. But we think that is okay. Their purpose is not to remind you of your grandparents, though it’s nice if they do. No, their power, their raison d’etre is purely to pack a half a day’s load of carbs, fat and protein into a handy carry delivery device. And they can pack a wallop.

At Get-Go, the biscuits are a just a tad smaller and a little denser, in a pleasing way. Here we also sampled a sandwich of egg, cheese and breaded chicken on toast.

At White’s, the biscuits are substantial and hearty with a bit more crumb and though they were of a medium size, the filling, in this case, egg, cheese and bacon, was enough to exceed the biscuit’s own diameter.

At Stop N’ Shop, we doffed our beret to the croissant filled with ham, egg and cheese. C’est magnifique!

Having revisited these establishments each morning for a week in the arduous research for this article, we are making a personal choice to head the wise words of Tony Soprano to seriously consider salads. Kale chips and edamame for us, for a while anyway.