Dozens of containers lost from freighter off Oregon Inlet 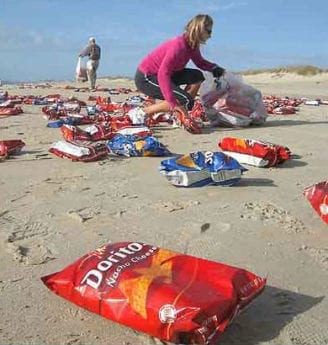 A ship lost a container of Doritos off Hatteras in 2006. (Donna Barnett/Island Free Press)

The U.S. Coast Guard is warning mariners to be on the lookout for dozens of cargo containers that fell from a freighter Saturday night about 17 miles off Oregon Inlet.

The cargo ship Maersk Shanghai contacted watchstanders at USCG Sector North Carolina’s command center that they lost approximately 70 to 73 cargo containers due to high winds and heavy seas, according to a statement.

There has been no word on the contents of the containers. Items lost at sea have washed ashore on the Outer Banks for centuries, and at times residents have been able to take full advantage of the bounty.

On Nov. 30, 2006, a container full of Doritos washed up off Frisco, scattering nacho cheese and cool ranch varieties near the National Park Service bathhouse.