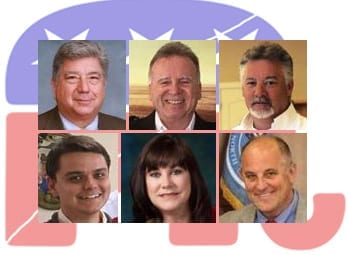 In 2014, when Republicans took control of the Dare County Board of Commissioners for the first time in many decades, everything seemed to be going the Grand Old Party’s way.

Four years earlier, Republicans had taken control of the N.C. General Assembly for the first time in over a century.

A GOP governor was in place, and soon, both of Dare’s representatives in the state legislature would be Republicans.

But by the year 2016, the party seemed to be having difficulties, and factions were steadily emerging.

Trouble has been brewing much longer. At its core, Dare’s GOP is a microcosm of what’s happening in other counties and nationwide.

Getting someone to discuss publicly the festering division is impossible.

But its easy to see it, hidden in the buzzwords and comments on social media, the local Tea Party blog or newsletter and in off-the-record interviews.

One faction can trace its origins to the Tea Party movement and the time when it shifted from functioning as a grassroots bipartisan organization to a becoming a faction within the GOP party structure.

The members of this faction are not new to Republicans. They’ve been around since the days of the John Birch Society and the Barry Goldwater campaign for president in 1964.

They are socially conservative and rabidly anti-tax. Many believe in broad-based conspiracy theories such as the United Nation’s “Agenda 21,” which they claim will lead to a one-world government.

And they consider themselves the “true Republicans,”  holding any party member who disagrees with their viewpoint in contempt and using the term RINO (Republican In Name Only) to tarnish their opponents.

There really isn’t a name to identify the other faction, although mainstream or moderate Republicans seems to be the most common.

They are the non-Tea Party Republicans who hold more conservative values when compared to Democrats  but are not bound by rigid rules regarding taxes, social issues and bipartisan cooperation.

Locally, a turning point was reached when Beverly Boswell was elected to the Dare County Board of Commissioners and began to openly spar with other Republicans on the board.

Boswell’s pushback followed a pattern and leads to yet another faction within the Dare GOP and at its center: Jordan Hennessey, the young legislative aide to state Sen. Bill Cook from Kill Devil Hills.

Three years ago, Hennessey had aligned himself with local watermen looking for a way to more permanently fund the dredging of Oregon Inlet. They found a funding source by proposing to siphon off taxes collected by the Outer Banks Tourism Board for beach nourishment and redirecting those toward dredging.

Republican commissioners Bob Woodard, Wally Overman and Jack Shea balked at the plan, while Boswell supported the move and took to social media attacking the Tourism Board and beach nourishment.

From there, Boswell was often seen in the company of Hennessey and Jim Tobin, who owns Pirates Cove Marina and was eventually appointed to the Board of Commissioners last spring.

Later, when Hennessey appeared to be targeting the job of Mike Remige, the well-liked manager of the state-owned Jennette’s Pier, Boswell refused to join her fellow Republicans on the board in opposing those efforts.

In 2016, Boswell was elected to the state House of Representatives, and the Dare GOP chose Rob Ross to replace her.

During Boswell’s first term in Raleigh, her relationship with the GOP-controlled board in Dare was the opposite of what one might expect.

Rather than working with her fellow Republicans, Boswell went against the board’s wishes on a number of issues.

From repealing the plastic bag ban, creating partisan school board elections and supporting offshore drilling, to backing a second attempt by Cook’s office to remove Remige from his job at the pier, the GOP members of the board and Boswell held polar opposite positions.

Additionally, Boswell appeared to go out of her way to punish her former board colleagues for differences of opinions they had during her tenure as a commissioner.

Boswell introduced legislation to force the Tourism Board to reallocate the funds they collected in order to direct mony to projects and uses Boswell favored. In the battle over the Tourism Board, both Boswell and Cook’s office granted local blogger and lightning rod, Ray Midgett, extraordinary access to state legal and audit resources.

She also took $1.5 million of state bond money slated for a new College of The Albemarle campus in Dare County and gave it to Currituck County, because both she, and Cook’s office, didn’t like the ownership formula Dare proposed.

That setup would allow the state to fund a portion of construction through the bond money, while the county would own the facility and take responsibility for maintenance.

At the same time, Cook’s office ordered a mini-audit of the Tourism Board and stepped back from Boswell’s dispute with the Dare board over COA, allowing her to control the situation and the disposition of the bond funds.

The unusual actions continued throughout 2017, with a Republican-controlled Board of Commissioners passing a number of resolutions opposing legislation and positions taken by the county’s two Republican legislators.

Last spring, Margarette Umphlett resigned from the board, and a Boswell/Hennessey-ally Jim Tobin was appointed to replace Umphlett.

When the Board of Commissioners decided to raise property taxes for the first time in several years, Tobin and House opposed the measure.

But neither offered an alternative budget nor did either point out specific areas where the budget could be cut. The tax increase triggered another round of infighting within the Dare GOP, with board members angered over the fact a Republican-controlled board raised taxes.

The result of that in-fighting has led to Ed Danko, another GOP insider with ties to Hennessey — who helped Danko gain an appointment to the Roanoke Island Historical Association as the N.C. Senate’s ex-officio designee — facing off against Ann Petera for the At-Large board seat being left empty with the retirement of Jack Shea.

Shea endorsed Petera at a GOP Executive Board meeting, but Danko, who was the party’s Public Relations chair at the time, did not release that information, nor did he include Petara in a photo Danko sent out announcing his own and other GOP candidates filing for office.

And on the last day of filing, Commissioner Rob Ross found himself with a GOP opponent for his seat with speculation that Hennessey or the Tea Party faction played a role in Ronnie Merrell’s recruitment.

While party officials may continue to publicly portray the situation as merely a difference of opinion, the differences in ideology, compounded by clashes between Cook, Boswell, Hennesey and elected GOP officials in Dare County, indicates there was more taking place behind the scenes than what party leadership is willing to admit.

And those differences are now manifesting themselves in primary challenges, almost open warfare in public and on social media. That could spell real trouble for the Grand Old Party in the November election and beyond.