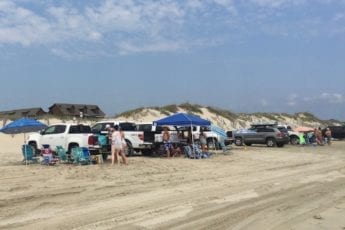 Permits to park on Currituck County’s beaches in the off-road area will be required from Memorial Day until Labor Day. (Dee Langston)

The Currituck Board of Commissioners voted 5-1 Monday to require parking permits during the height of the summer season for the off-road section of the county’s beaches.

The vote was a repeat of the outcome of a Feb. 19 vote on the issue, with Commissioner Mike Hall of Moyock again saying “nay” to the proposal.

“We’re not here to discourage day-trippers,” Hall said prior to Monday’s vote. “We have other beaches; we have a lot of parking areas; we’ve added places where you can find out what’s available for you to go visit,” he said.

“But I think we need to take a chance to see if these other options are working,” he added. However, he commended county staff and the board for the work that was put into the ordinance.

“I’m impressed at every level, but are we ready to begin it this year? Should it be done before we find out if the other changes that we’ve made will work?”

The rest of the board apparently disagreed with Hall, with some pointing out that safety on the northern beaches is a topic that has been discussed for years.

“Yes, we need to start,” Commissioner Mike Payment said, adding that the ordinance could be changed or tweaked as needed.

Commissioner Paul Beaumont said that residents of Carova Beach had asked the board to consider parking permits. “This didn’t happen in a vacuum,” he said. “We’re trying to protect kids, visitors, guests and residents.”

The parking permits are intended to cut back on the amount of traffic on the county’s northern beaches, which are clogged with vehicles, beach-goers and anglers during the summer months.

“The number-one issue is safety,” Commissioner Bob White said. “These roads are our roads. This is how I get home every day. If we don’t get control over the amount of traffic up there, we’ve got a very real problem.”

Commissioner Kitty Etheridge of Shawboro was absent from Monday’s meeting, but voted in favor of the ordinance amendment last month.

Although some speakers during the public comment section of the meeting suggested that requiring a permit to drive on the beach might be the best option, White said that wasn’t feasible.

“You couldn’t put a gate at that cattle gate,” he said, adding that traffic backed up at the gate would cause even bigger problems.

The new ordinance requires permits to park on the 14-mile stretch of beach from Corolla village to the state line from the Friday before Memorial Day until 11:59 p.m. Labor Day, allowing anyone to park on the beach the rest of the year at no charge.

Owners of homes in a rental program that are beyond the North Beach Access Ramp will be able to obtain up to two permits per house at no charge, which can be used by renters.

People who don’t live in or own property in Currituck may purchase parking permits at the county’s tourism offices in Moyock and Corolla, County Manager Dan Scanlon said. Visitors will also be able to purchase the permits online, he added.

Although previous discussions of the ordinance included watching a video about the new rules prior to purchasing a permit, Scanlon said those wishing to buy a permit will simply be required to sign a statement saying they understand the parking ordinance.

Fees for the parking permits will be established during the county’s budgetary process, Scanlon said. County staff is currently working on a proposed fee schedule and should have recommendations in place before May 1, he added.

Exemptions to the parking permits will be granted to commercial fishermen, hunters, outdoor tour operators that have valid county-issued licenses for their businesses and are conducting an active tour at the time, along with contractors who are working for the county or on projects such as beach restoration or walkways and decks to the beach.

The passes would not be required of those who just want to sightsee in the four-wheel drive areas along and north of Corolla village.

Because the ordinance did not pass by unanimous vote at its first reading, it had to be voted on again Monday, and only required a majority to pass.