Settlement calls for bridge builder to pay $10 million for blackout 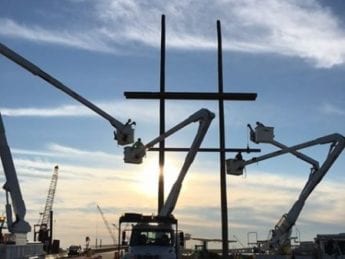 Businesses, renters and residents who lost power last summer after a transmission line was cut during construction of the new Bonner Bridge could get a share of $10.35 million under a preliminary settlement pending in federal court.

The settlement, which still needs final approval in U.S. District Court, calls for payouts from PCL Civil Constructors of $8.1 million to businesses and $2.25 million to permanent residents and renters.

Separate actions by numerous plaintiffs were consolidated last year into a class-action suit that led to the agreement.

Electrical power was cut July 27 when the company building the replacement for the 50-year-old bridge drove a steel casing into the electrical transmission system running underground on the Pea Island side of Oregon Inlet.

Casings are giant tubes that enclose individual concrete pilings to keep them in position during installation. Workers were setting aside the casing for future use by driving it partially into the ground.

After the power went out, Dare and Hyde counties ordered mandatory evacuations of visitors during one of the busiest times of the tourist season.

The settlement also calls for the company to pay up to $100,000 in court costs. It caps attorney’s fees at $3.4 million.

Court papers named a firm to handle notices of the settlement and to set up a website for posting information and downloading claim forms. An administrator was named to handle claim forms and certify if an applicant qualifies for payment and how much.

Potential claimants can also file a request for an exclusion. Otherwise, they will not be able to pursue their own legal action once the deal is finalized, according to the settlement.

“The settlement agreement is the result of extensive arms-length neogtiations by experienced counsel over the course of three days of mediation and assisted by experienced mediator Donald H. Beskind,” court papers filed March 9 said.