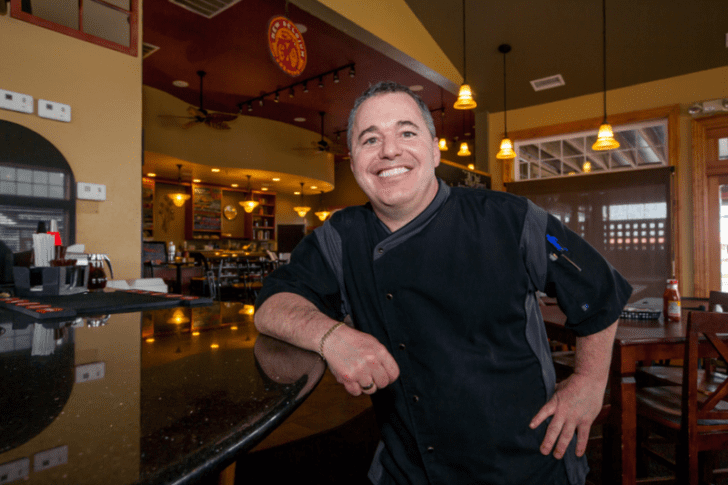 We snuck up on Joey Russo one night. That’s hard to do. As is the custom here at The Outer Banks Voice, we like to dine unannounced. Dining with a friend, we used her name for the reservations. We do this because we prefer to receive the same treatment as anyone else so that our reports will be fair.

But Joey Russo knows us. We go back. And he’s the kind of guy that, even in the depths of his kitchen, takes note of all who enter his realm. We gave our name to the hostess and were quickly seated in the roomy, yet cozy-feeling dining room.

We’ve seen each other off and on, but it had been a while since the last time. We both arrived in the Outer Banks roughly at the same time, 25 or so years ago. We first met at the gym were he was working. We did not also know he was a chef until some time later when he cooked for a small gathering of friends. We were surprised. But then, Russo is the kind of person who not only always has something going, he usually has several things going at the same time. He even taught our children to swim! He is still full of surprises.

Russo was born into a large Italian-American family in New York State and was immersed in the restaurant world from an early age. Both his grandmother, who he called Gigi, and Russo’s uncle John had restaurants. So he was always involved in cooking but didn’t see it then as his future. In college he was drawn to psychology and philosophy and developed a knack for writing.

“You know, when I was in college, I was the guy my buddies would come to, to write love letters for their girlfriends,” Russo says. “Now I look back on some of this mushy stuff I’d write like, you’re like an angel from the heavens. I was pathetic.” We laugh. “But you know, what it was, it was always about passion, from the get-go. It wasn’t that I never wanted or not wanted to cook. I just never imagined I’d put my passion into that.

“We grew up in that (family cooking tradition) so we were spoiled. We were so lucky. We weren’t wealthy by any stretch of the imagination, but we made the most of what we had. My grandmother had a knack for looking in the refrigerator and without any thinking there’d be a wonderful meal on the table.”

Still, the kitchens beckoned. He left Times Square for Virginia Beach in 1988. By 1989 he was assisting opening the Virginia Beach Olive Garden. Trips down to the Outer Banks to release the pressures of the big kitchen eventually landed him here taking a spot in the line for Mike Kelly.

In the years since, he has shared his remarkable culinary talents at many of the best Outer Banks restaurants, operating as a knife for hire. The odds are good that if you have been a regular restaurant diner here, you have sampled Russo’s cooking.

Until recently, Russo was the chef at Duck Woods Country Club. Then around Easter of last year, the time was right. Joey and his wife, Olga, made the plunge.

Joey and Olga originally met while both were working at the Good Life Gourmet at its Dare Centre location. Olga Russo had emigrated from Belarus years before and had attained citizenship before they met. An opportunity to buy The Good Life Gourmet arrived and they pounced. It was a bit of a full circle moment. “It was a funny little thing, she told him (the owner) the day she left, she said, one day I’m going to come back and buy this place from you.”

They maintained the name long enough to get their footing, then made the change official, launching Russo’s Bistro and Bar that September. Later that month they added limited evening dining. And now, with a full-blown restaurant of his own, he still operates as a private chef, largely to visiting families who call on him for a special night.

So last month, we were enjoying our appetizers of tuna tatake stuffed cannoli, steamed clams and mussels when Joey stepped into the dining room to greet his guests. He made his way to our table and introduced himself. Then he did a double take. Yes, it was us, and many hugs and laughs were had. If anything, Russo is an engaging, gregarious, exuberant guy, and unexpectedly seeing old friends kicked that up a few notches. It is good to see him in this space, with his own name out front.

In the short time since it has opened, Russo’s has gained an ardent following. From 8 a.m. to 3 p.m., they keep up a brisk breakfast and lunch pace. Omelets, sweet potato pancakes, pork belly English muffins give way to soups, salads and hearty Panini sandwiches as morning turns to midday.

We have since popped in for early afternoon brunch after the noon rush. As we lingered over a nice lox benedict and a turkey panini, we noted an interesting thing taking place at the tables around us. Journalist or not, we all eavesdrop on occasion.

A table of four co-workers, having finished their lunch, were working up marketing strategies for their company. Ideas were passed around and notes taken. At another, two gentlemen were deeply involved in their laptops individually, then joined in a discussion on the topic. Writer and editor collaborating perhaps?

What this tells us is that in the short year of being open, Russo’s has been become a place where both pleasure and business can take place. We see that as a good sign of comfortable adoption by locals.

Two nights, soon to expand to three nights a week, the pace becomes more relaxed, even romantic for diner service. Russo changes this menu a bit every week so it is always good to check the website or their Facebook page. The menu is eclectic, marrying Italian, French, Greek and even Russian influences.

A dish we really enjoyed was called “Black Pearls of Nona,” a nod to the Italian term for a dear grandmother, and possibly her favorite strand of pearls. House-made squid ink cheese ravioli plays the part of oyster shells. “Pearls” of jumbo lump crab are scattered over the pasta and are just visible under a cloak of Vodka sauce and a flutter of Pecorino Romano.

A slice of spinach pie and roasted fingerling potatoes serve as the background for the pan-seared local flounder filet. The dish is topped off with roasted red pepper aioli and zesty gremolata.

Another fresh fish dish, “Voodoo Snapper,” recalls the notion of “blackening” a fish to impart a spicy crust using a very hot pan to sear the spices. In this turn, the spices are more Jamaican jerk than Cajun. Israeli cous cous, tomato relish and roasted tomato Hollandaise finish the dish.

Though we were about to pop, we decided to share a slice of Ricotta Pie. Just a hint of sweetness braced the tart cheese flavor. A dollop of macerated berries covered the top.

Little did grandmother Gigi know the influence she and her cooking would have over Joey Russo’s career. We think she would be most proud. To him, she was the foundation of the chef and the man he has become.

From his grandmother, Russo also learned of the benefit of being generous. “Here’s something they don’t teach you in school. The cops walking the beat, they’d get a plate of food. The mailman got a plate of food. That was her way. Years later, I find myself doing the same thing. My drivers will drop a produce off, I give them a sandwich. Takes me two seconds. Is it costing me something? That’s not how I look at it.”

“I use a phrase sometimes, I love it and I’ve come to pass it on over my life. Make it a habit of planting shade trees, that you never intend to sit under,” Russo said. He continued, “The world is a crazy, messed up place right now. If we could each do one thing, each week that’s not for the betterment of ourselves, that’s a start.”