Fisheries bills may not get heard before legislature adjourns 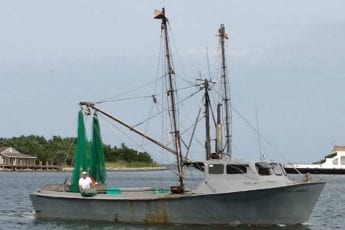 One bill would implement some changes to the eligibility rules for commercial fishing licenses. (David Mickey/Ocracoke Obsever)

State legislators are getting a crash course in commercial fisheries due to the variety of fishing issues addressed in a pair of bills filed in the short session.

But time is running out for those proposals to be heard in the N.C. General Assembly, as lawmakers plan to wrap up their work as soon as the end of this week.

One would have to be occupied by someone having more than 50 percent of their income derived from buying, selling, processing or distributing of seafood.

The other would be for a person earning more than 50 percent of annual income from selling sports fishing goods or services.

The bill is co-sponsored by Rep. Beverly Boswell, R-Dare, and Rep. Bob Steinburg, R-Chowan, and was assigned to the House Wildlife Resources Committee.

North Carolina Watermen United asled to change the at-large seats to two seats for charter/headboat fishermen who also receive part of their income from commercial fishing, making them both sport and commercial fishermen.

That request was not included in the legislation.

The measure also seeks to bring back the Joint Legislative Commission on Seafood and Aquaculture, which was disbanded a few years ago at the request of former Division of Marine Fisheries Director Louis Daniel.

The JLCSA reviewed major proposed Marine Fisheries Commission actions, which Daniel objected to because he said its work slowed up the fisheries management process.

The bill proposes a moratorium on new rules by the Marine Fisheries Commission while the panel of lawmakers review the makeup and quorum of the commission.

But the moratorium would not apply to actions needed to comply with federal rules, regulation enacted to control fishing if based on peer-reviewed science and duties set out in law that the Marine Fisheries Commission must meet.

An appropriation of $100,000 is included to pay the Divison of Marine Fisheries administrative cost of complying with the proposed legislation.

Some of the major changes to the current rules included in the bill include raising the cost of the Standard Commercial Fishing License (SCFL) to $800, doubling the current $400.

The current license tax was set three years ago and, according to the statutes, half that amount is to support the observer program mandated by the Incidental Take Permit issued to the state to allow flounder fishing when turtles are present in state waters.

Any revenue not used from that portion of the fees is set aside in a fund that is supposed to be controlled by commercial fishermen and used for fisheries management purposes such as collecting data or paying for needed research.

Although the fund now has in excess of $1.5 million, no expenditures have been made because the Memorandum of Agreement between the controlling committee of fishermen and the Marine Fisheries Commission has been held up for about 18 months by the MFC attorney, who has yet to sign off on it.

The new legislation makes no mention of that existing commitment.

The proposed bill would significantly shrink the size of the commercial fishing industry by forcing many part-time fishermen to fish more to reach what would be the mandated catch limit — 1,000 pounds or 15 trip tickets a year — or lose the right to have a fishing license.

No license transfers would be allowed except to family members or if the license holder sells their boat.

The pool of available fishing licenses would be eliminated, with only 100 new pool licenses plus the number of existing licenses as of June 30, 2018.

The cost of Retired Standard Commercial Fishing License would increase from $200 to $400, while a Crew License would be available for $100.

The crew license would be for those who work on fishing vessels under a commercial fisherman/captain who has a standard license.

Crew members who hold that permit for three years may obtain a standard license without meeting other requirements.

The proposed legislation also repeals the Recreational Commercial Gear License and changes types of gear that can be used to five crab pots and bait seines.

Both of the bills have been assigned to the House Wildife Resources Committee, but have yet to be heard, and the committee has not been scheduled to meet, according to the calendar for Monday.