The SaltBox Café: A rewarding detour off the beaten path 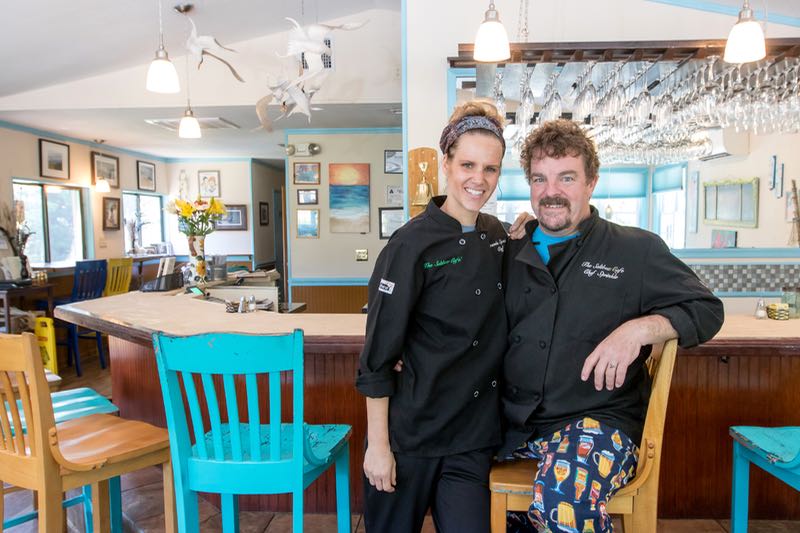 They had me at the appetizers. There it was, listed under small plates, “New Orleans BBQ Shrimp.” I asked if this was the real deal and was assured it was.

We had fallen in love with this misnamed dish at Mr. B’s Bistro in New Orleans one rainy day when we ducked in to keep from getting drenched. We say misnamed because the preparation has nothing to do with barbecue.

The signature dish is deep plates with massive, head-on shrimp in pools of a dark, tangy sauce. Large amounts of butter, pepper, Worcestershire and lemon juice made up the velvety gravy. Toasted crusty creole bread was there to mop up any sauce left behind. This was easily one of our top 10 meals of all time.

Seeing this dish listed at the SaltBox Café, we had to try it. Not a full entrée size, and the shrimp in this case were peeled, but that just meant there was no need for a bib. It was sublime.

Later, Chef Randolph Sprinkle made his way to our table and we chatted. I remarked on the shrimp being so like Mr. B’s. He said, “Yes, I was Sous Chef there under Michelle McRaney.”

The world is small. We are glad it is also full of talented chefs and tasty food.

But I knew we’d get there eventually. The reports have been very positive. Friend and fellow food writer Rosie Hawthorn covered their very popular off-season wine dinners in her blog, Kitchens Are Monkey Business. Then I sampled some of their goodies as a judge for the March of Dimes Signature Chefs Auction at Jeanette’s Pier last February. The SaltBox Café crew came away with the lion’s share of awards that day.

When friends offered to treat us to dinner there recently, we jumped.

The cozy dining room feels intimate but comfortable, even with a full house. On nice nights, there is covered and screened outdoor seating for the overflow crowd.

Inside, a few thoughtfully placed nautical accents remind one of the island location. An elbow bar can seat a handful of diners. There is no liquor. Beer and wine are the adult beverages here, but folks looking for “cocktails” do have choices, from special mimosas to sake bloody marys.

The menu changes weekly, if not more frequently, and draws from Randolph’s depth of 38 well-traveled years of experience and Amanda’s passion for exploring Asian and Indian vegetarian cuisines. She is also the maestro of the desserts.

Back to the dinner. The shrimp were great, but so were the other dishes. There were the superb grilled lamb chops on lentil salad with Malibu carrots and curried mango sauce. There were the smoked soft shell crabs. There was the Maryland crab cake with the parsnip puree and lemon cream sauce and the luscious bone-in pork chop bathing in a rich apple demi-glace.

We don’t often indulge in desserts, but our friends do. We surrendered. Of the desserts we shared, all were fine, but two stood as examples of what I would consider next-level cooking.

The Asian-themed Green Tea Crème Brûlée was delicate and heavenly and nowhere near as jarring in taste as the name might suggest. The softly bitter aspect of the tea married seamlessly with the smooth custard.

Then there came The Chocolate Pie. Now, if I told you that the best chocolate pie I ever had contain no egg, no flour and used avocado as its base, and wasn’t made by my grandmother, Mom T, I’d be making a bold statement. But it is true. Oh, Mom T, bless your heavenly heart, you have been bested.

Chefs Randolph and Amanda Lee Wolf Sprinkle are the co-owners and moving force of The Saltbox Café. The best cuisines are studies in contrasts, and the same can be said of this couple.

He’s the omnivore. She’s the vegetarian. But it would be too easy to simply think of Randolph as the meat guy and “leave” the veggies to Amanda. Rather than being culinary opposites, their perspectives are complementary. She is the yin to his yang.

Discussing meal planning, Randolph said, “Ten years ago I’d start with the protein, but now I start with the produce … With proteins, I’ve handled most of them — emu, kangaroo or snake or alligator, so there’s nothing new. With produce, there is always something new.”

Last February the restaurant held a vegan wine dinner benefit. Amanda’s creativity with the non-meat food items again pushed Randolph to explore beyond the familiar. The meal was completely created in-house, even making tofu from scratch.

Amanda said, “I told them we are doing this one hundred percent vegan. You’re scrubbing out those fryers, we can’t have any cross-contamination. I made him stress out that way. Half way through the prep, he told me this was the hardest wine dinner he’d ever done in his life.”

“It was really good for flexing your culinary muscle,” adds Randolph. “One of my favorite dishes of all time is Tournedos Rossini,” referring to the Escoffier classic combination of a beef tenderloin filet on top of a brioche crostini and capped with seared foie-gras and topped with a rich truffle demi-glace. He set out to make a vegan version.

Amanda added, “It freaked a lot of people out. That was the most talked about dish,” Being a huge success, they plan to repeat it again in their series of off-season wine dinners, pairing their plates with wines from a vegan winery.

The two met when Randolph stepped in to teach an advanced culinary course at the local community college where Amanda was enrolled as a Culinary Arts student.

Randolph’s career journey had led him from his home in Northern Virginia to the Culinary Institute of America in New York. He has worked as chef from Pittsburgh to Venezuela to New Orleans, where he spent eight years working with heavy hitters such as Horst Pfeifer and Emeril Lagasse. Eventually he landed a chef spot in Saint Michaels, Md. on the Eastern Shore not far from where Amanda was from.

Besides sharing his knowledge as a well-traveled chef, Randolph saw teaching as a means for scouting new talent, to pump some new blood into the all too often revolving door of food industry folks in a tight community, and bring some eager young interns into the restaurant he was running.

“Don’t tell her I said this, but she was head and shoulders the best,” Randolph said, just low enough so Amanda, on a phone call, couldn’t hear. But it took some time before Amanda warmed up to Randolph’s style.

On the first day of class, he had everybody set up cutting boards and sharpen their knives.

Amanda recalls, “He said he wanted to test our knife skills; we just wanted to cook great food and eat.” Randolph proceeded to carve a butterfly from a carrot and commanded to class to do the same. The students were humbled. “That’s horrible, what the heck is that? That’s not even a carrot anymore,” came the responses from the instructor.

The person running the program asked Amanda what she thought of the new chef. “I said I’m not a huge fan.” He then told her that the chef wanted to pick out students to work with him as interns and would she be interested. “I said, ‘Well Bob, let’s give it a week or so. I don’t know this guy.’ ” She ended up being selected.

Working together in the kitchen brought about trust, and then began a strong friendship. After three years working together at the Key Lime Café in Saint Michaels, they started going out. Once engaged, the pair began to travel to the Outer Banks.

“He said I want to take you somewhere,” Amanda said. It became a habit. Fueled largely by Randolph’s love of surfing, the duo made weekend trips down to Hatteras six weeks in a row at one point. “The ocean made him happy.”

In 2010 they decided they would move here, applying at several restaurants. Their qualifications won them acceptance at several places, but The Sanderling Inn offered them positions with housing and it was “Goodbye, Maryland.”

They later would settle in Colington, even when another opportunity to open a restaurant 30 miles away in Corolla meant a demanding commute. It was Colington Island’s quietness and sense of community that provided them a safe haven from the hustle and bustle of the beach.

“We’d have never have found this place if we didn’t live back here,” Amanda said. 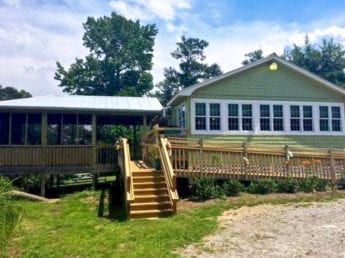 The building has been several venues over 27 years. (Saltbox Cafe)

The building now home to The SaltBox Café had housed a string of bars and restaurants during its 27-year life. Just under two miles west of the intersection of Colington Road and U.S. 158, the structure sits alongside and just above a small creek of the type that crisscross the island.

The couple was driving out, headed back to meet family in Maryland for Thanksgiving when they noticed a for-sale sign on the marquee. Randolph’s interest was met with Amada’s practical attitude that the place would need too much work done to meet their standards. Yet by the time their car was crossing the Wright Memorial Bridge she had a change of heart.

“Thought about it. You know what? It would be a cool place if we could do brunch,” Amanda said, thinking about the after-church crowds. “And that’s how it started.”

They came back from Thanksgiving and arranged a walk-through with the owner. It needed work but had potential. A deal was stuck, and they were suddenly restaurant owners and they have built a steady reputation since that day.

“People open restaurants for the wrong reasons, to make money. If you want to make money there are many other ways to make money. We do this because we’re both chefs and we love cooking and we want to run a restaurant. Making money is something that hopefully will happen. When people come in, it isn’t about how many more people can we get in here. It’s more about, are they going to have a good experience here, experience what we do?” said Randolph.

Amanda adds, “We’ve had other offers (to open other restaurants) and we thought about it. Nah. We’re good. There’s is still so much we want to do here. This place is turning out to be almost exactly what we wanted.”