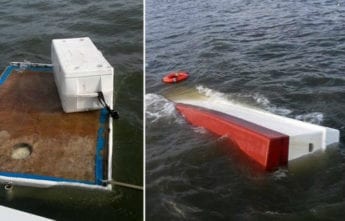 Debris that saved the men (left) and the hull of the Mad Lady II. (USCG)

The two-man crew of a 35-foot shrimp boat from Carteret County was rescued by the Coast Guard early Wednesday after their craft capsized in the Pamlico Sound during a thunderstorm.

The Mad Lady II from Marshallberg was reported overdue Tuesday evening, after running into generator problems while trying to reach Englehard.

The wife of a fishermen called for help Tuesday night, on behalf of her husband, reporting the men were trying to find safety near shore in the deteriorating weather, according to a Coast Guard news release.

They had departed Ocracoke Tuesday morning and were planning to shrimp in Pamlico Sound before unloading their catch in Engelhard, the Coast Guard said.

N.C. Wildlife and Marine Patrol officers launched a search around midnight, and flares were spotted in the vicinity of Wysocking Bay at one point during their search, said Coast Guard public affairs Petty Officer First Class Andy Kendrick.

At 7:32 a.m., the captain and mate were found by the helicopter crew clinging to debris about seven miles from where the boat went down.

Kendrick said the two men were not seriously hurt and were taken to Sentara Albemarle Medical Center in Elizabeth City for evaluation.

“Locating the two fisherman was a true team effort between local first responders, good Samaritans and the Coast Guard,” said Lt. Cmdr. Kevin Karow, the search and rescue mission coordinator. “We are all grateful that the men were able to hold on to the floating debris throughout the long night.”