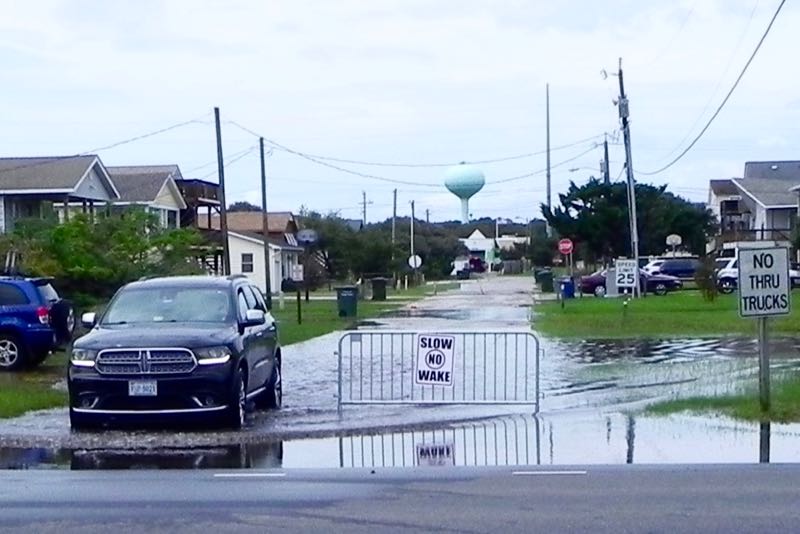 Conditions improved Monday despite some morning showers. But the Town of Kill Devil Hills reported problems on the south end of N.C. 12; Wrightsville Avenue and Memorial Avenue near Martin Street; and Shay and Quail lanes west of U.S. 158 toward the Nags Head Woods area.

A little after 1 p.m., the North Carolina Department of Transportation closed N.C. 12 from Atlantic Street north to Calvin Street, and taffic was backing up.

On Roanoke Island, several neighborhoods were flooded, with some houses reportedly inaccessible.

Where septic fields are under water, Dare County’s Environmental Health Supervisor Jack Flythe advised watching water use, such as limiting loads of laundry, until the water recedes. Companies that pump out septic tanks are being cautious. If the ground is saturated, emptying the tanks might cause them to float and cause more damage, Flythe said.

And, he said, be wary of standing water, which is sure to be loaded with bacteria.

Meanwhile, Currituck County says it is seeing progress with efforts to pump flood water from communities on the Outer Banks. Pumping will continue throughout this week in Ocean Sands, Swan Beach, Carova and Whalehead.

About 1,000 gallons of raw sewage spilled into a containment moat at one of the treatment plants in Corolla on Friday. Last week’s rain was being blamed for the spill, as well as issues for many on the Currituck Outer Banks who were having problems with slow draining toilets and sinks.

See the county’s statement on the spill »

On Sunday night, barricades were up at flooded areas of the Beach Road and streets between the highways.  Others were a gamble as deep, standing water covered the pavement. Police blocked off one lane on southbound U.S. 158 just below the Kill Devil Hills line.

Water was bumper deep on Colington Road at the intersection of U.S. 158, and passing cars and trucks sent waves into the lot of the nearby Circle K.

Efforts to detour around high water often led to another flooded street or intersection, and dusk challenged any effort to judge the depth of the water. 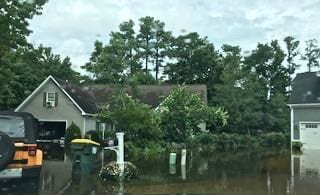 “Due to heavy rain some roads are flooded. If you can’t see the road, turn around — don’t drown … or ruin your car. What you may think is a driveway or turn may actually be a drainage ditch,” Dare County Emergency Management advised on Twitter.

No-wake signs were put up in some spots.

“Please do not drive through the flooded areas. The wake from your vehicle will push water into people’s homes and business. Do everyone a favor and stay off the streets,” the Town of Nags Head tweeted.

At about 5:40 p.m. Sunday, The National Weather Service office in Newport Morehad City reported that 3 to 5 inches of rain had fallen when it extended a flash flood warning to 9:15 p.m. and that another 1 to 3 inches were expected.

More rain is probable during the next couple of days before the area settles into the typical summertime pattern of isolated thunderstorms and hot days, the Weather Service said. 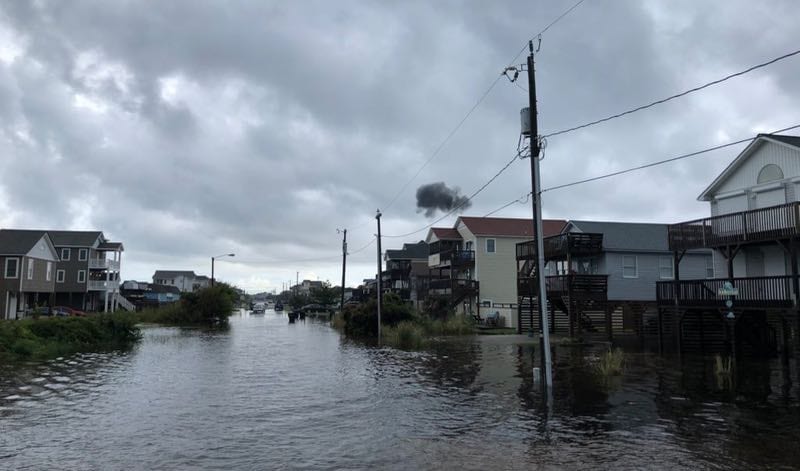 A puff of smoke rises after lightning hits a transformer near Wrightsville Avenue in Kill Devil Hills. (Eric Slagle)