With private partner aboard, Dare on course to build a dredge 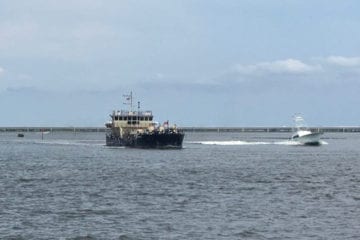 Dare County has chosen a contractor for the public-private partnership that will build and operate a dredge to maintain Oregon Inlet.

One of two companies to respond to the county’s request for proposals, EJE Recycling of Greenville was chosen over a Massachusetts company primarily because of its experience working the inlet and its plans to base and maintain the dredge locally.

The county’s Oregon Inlet Task Force made the selection last week. Next, the panel will work out a contract to present to the Board of Commissioners, County Manager Bobby Outten said.

Dare County and EJE will work together to find a builder for the vessel. It would probably be a hopper dredge like the Corps of Engineers’ 150-foot Currituck or 156-foot Murden, which both work the inlet. But a combination dredge would also be considered if it can be designed and is affordable, Outten said.

The two hopper dredges do the heavy-duty work. They pull out the sand and haul it to a spoil site, but they need deeper water to operate. Each can haul more than 500 cubic yards of sand, the equivalent of about 36 dump-truck loads.

Lighter maintenance is done by a sidecaster, which shoots the sand just outside the channel.

EJE’s competitor, Cashman Dredging, is a larger, more established company. But it could not promise to base the dredge on the Outer Banks.

In its proposal, EJE said it plans to homeport the dredge in Wanchese and maintain it in Manns Harbor. Porting and maintaining the dredge locally is crucial because it will minimize turn-around times for maintenance and docking during bad weather, Outten said.

Another plus is that Donnie Potter, the leader of the EJE division handling the project, has solid experience in the inlet as a skipper of the Currituck and later as chief of the Physical Support Branch with the Corps’ Wilmington District.

Plans for the dredge were included in the state’s updated budget passed earlier this year. The biggest local provision authorized $15 million from the shallow draft inlet dredging fund to create the partnership to buy the dredge, with Dare County paying for its operation in Oregon and Hatteras inlets and other channels.

The dredge funding requires the private company to also pay $15 million for the $30 million dredge and provide work to Dare County at a reduced rate in exchange for a state loan eventually being forgiven.

While Dare would likely be using it the most, the dredge would be available to help clear other waterways along North Carolina’s coastline. It could be operating in 18 months to two years.

Dredging has crawled to a near halt as federal funding for smaller inlets and harbors has been repeatedly cut by Congress and the White House for decades.

Dare County and North Carolina have since picked up the slack by paying the Army Corps of Engineers to clean out the channels with their limited fleet.

In a formal resolution passed at their May 7 meeting, Dare County commissioners pledged $3,250,000, with $3 million already set aside from an occupancy tax allocation for dredging.

Matching money from the state that would bring the total to $10 million for operation of the dredge over a five-year period and would come from the shallow draft channel fund.