Feds now say they will wait until January for ballots, election docs 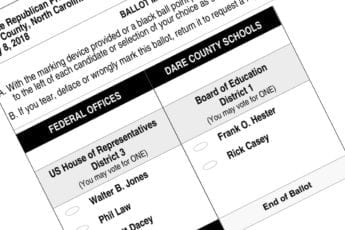 Update, Sept. 6, 10 p.m.
Federal prosecutors and immigration enforcement officers have revised their subpoena of millions of voting-related documents and ballots from the state and 44 counties across eastern North Carolina.

After local and state elections officials said meeting the subpoena’s demands by Sept. 25 would have hampered preparations for the November mid-term elections, the assistant prosecutor for the Trump-appointed U.S. Attorney for eastern North Carolina has extended the deadline to January.

They also will allow the redaction of how more then 2 million absentee and early voters marked their ballots.

Federal prosecutors issued subpoenas Tuesday to the election boards in 44 North Carolina counties, including Dare and Currituck, and the state Board of Elections for tens of millions of documents dating back to 2010 and covers all ballots cast in previous elections.

Over two million ballots cast in elections over the last five years could be traced to the voter who cast them, and more than 15 million documents and images would have to be provided.

One local elections official said the request would be “devastating” to preparations for the upcoming mid-term general election that have been delayed due to several court battles.

The subpoena from the U.S. Attorney’s Office for Eastern North Carolina, U.S. Immigration and Customs Enforcement and the Department of Homeland Security requested the poll books, voting records, and all ballots cast in elections starting in 2013 from the county boards.

The subpoena issued Aug. 31 comes with 60 days remaining before the Nov. 6 election. The deadline for the documents to be submitted to prosecutors is Sept. 25.

All of the counties are in the district covered by U.S. Attorney Robert Higdon’s office.

WRAL-TV reported the inquiry may be connected to a grand jury investigation that charged 19 foreign nationals last month with voting in the 2016 elections.

That inquiry was also based in Wilmington, and this new round of subpoenas comes from investigators in that case: U.S. Attorney Sebastian Kielmanovich and Homeland Security/ICE Special Agent Jahaira Torrens.

The U.S. Department of Justice has said they would have no comment on the subpoenas.

WRAL reported Wake County Commissioner John Burns wrote to Higdon Wednesday, asking him to explain “the scope and timing of this extraordinary request.”

“I write to let you know that this investigation, launched 60 days prior to a general election of monumental importance … risks being viewed by the public as a partisan effort to interfere with the vote,” Burns wrote.

Joshua Lawson, attorney for the state Board of Elections, wrote in an e-mail to Kielmanovich “the subpoenas faxed to county boards are the most exhaustive on record.”

The email was a response to Kielmanovich, who had informed Lawson the individual counties could request an extension to the Sept. 25 deadline.

“In our view, compliance with the subpoena as-written will materially affect the ability of county administrators to perform time-critical tasks ahead of absentee voting and early voting,” Lawson said.

According to figures provided by state Board of Elections spokesperson Patrick Gannon, 2,268,167 ballots from elections held between Aug. 2013 and Aug. 2018 in North Carolina are traceable to the voters who cast them.

A person who votes early is assigned an individual number that also appears on the top of balloys cast by mail or at one-stop early voting.

3,367,012 ballots cast on election days during the same five-year period are not traceable to individual voters.

The state elections board is scheduled to hold an emergency meeting by phone on Friday. Kim Strach, executive director of the state board, told the local boards by email to consult with their county’s attorney.

Currituck Board of Elections Director Sydni Banks said they are waiting for guidance from that meeting on how to proceed, but she would at least request an extension to the deadline.

Michele Barnes, director of elections for Dare County, was out of the office on Tuesday and not available for comment.

Banks said they had not yet determined the total number of documents they would have to submit, and how long it would take to fill the request in Currituck.

“We will have to bring in our part-time elections workers to assist with gathering the documents,” Banks said. That will cost the county more money, above what has already been budgeted for the election.

The subpoena adds on to an already packed timeframe for elections offices because of delays in getting ballots printed for this year’s election.

This Friday is supposed to the first day ballots are sent to those who requested to vote absentee by mail.

But state courts just decided Tuesday that the language written by the General Assembly for six proposed amendments to the N.C. Constitution will be on the ballot.

And a federal appeals court will allow the November election to proceed using the current maps for congressional districts, despite the same panel of judges ruling that the districts drawn by the GOP majority in the legislature were illegal partisan gerrymanders.

The ballots have to still be formally approved by the local and state boards, sent to a printing company in New Bern that handles all 100 counties, then returned for final inspection before they can mailed to voters.

Banks said if an extension of the subpoena’s deadline is not granted, having to fulfill the requirements in less than three weeks would be “devastating.”