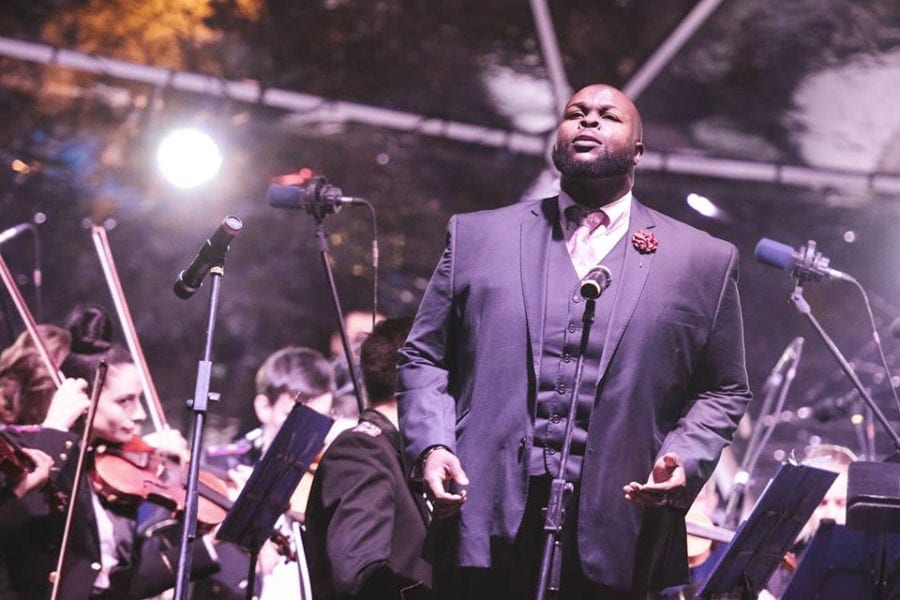 Returning to the Outer Banks as the lead tenor in the tragic opera La Traviata on Saturday, September 15, Tshombe Selby is coming back to where his journey began.

The journey has taken him from Manteo, where he grew up, to Elizabeth City State University where he studied vocal performance and finally to Manhattan where he is honing his voice and acting skills at the New York Opera Studio.

New York City may be one stop along the way, though. This spring he spent a couple of weeks in Edmonton, Alberta, performing in three roles. At the end of August he was in Kiev, the capital of Ukraine, performing with an international array of up and coming young artists at the Bouquet Kiev Stage.

The journey, though, began in Manteo.

“I started singing at Haven Creek Missionary Baptist Church.” Selby said. “I really enjoyed church and music. My aunt and grandmother were in the choir and I thought it was the coolest thing that they were standing and singing when everyone else was sitting.”

It was at the church that he learned to love music. “The raw emotion and joy it could provide people,” he recalled.

Although the music was learned by rote and he did not have to read music, he did get his first practical lesson in how to sing.

“My aunt said, ‘Baby, you got to get ugly to sing. You just got to open your mouth and let if fly.”

The music of the church, especially spirituals, continue to be an important part of Selby’s repertoire.

“When I went to ECSU they explained where the spiritual came from,” he said. “It brought a personal aspect to the music…It escalated my delivery.”

When he performed “An Afternoon of Spirituals and Arias” in April of this year at All Saints Episcopal Church in Southern Shores, his interpretation of spirituals was powerful and memorable.

He also performed spirituals at the NUOVA (Newly United Operatic Vocalists Association) Opera Festival in Edmonton and the most demanding critics gave him rave reviews.

“Half the faculty at NUOVA told me it was the best performance at the festival,” he said.

The journey to the stage in Edmonton or the Bouquet Kiev was a voyage Selby took with the support and the foundation that the Outer Banks was able to offer him.

“I’m still Tshombe from Manteo,” he said. “On the Outer Banks if you have the potential to do something and the drive, they (the community) will support you.”

And the community did support him. He performed in The Lost Colony and was its Choir Master.

Through The Lost Colony he was introduced to Lebame Houston and Elizabeth R and Company, the Outer Banks “…singular resident professional theatrical company.”

“He does have a terrific voice,” Houston said. Houston, one of the founders of Elizabeth R has an extensive background in theater and performance. She noted that although his voice was excellent, his training had not readied him for the stage.

“He had trained to be in a chorus,” she said.

She was impressed, though, with his willingness to work and the improvement she saw as he did so.

“I decided I would give him a chance,” she said. “Elizabeth R and Company five years ago put him on scholarship. We have raised the money to keep him in New York for the past five years. We are only paying for legitimate things in the study of opera.”

The faith Houston had in him seems to be paying off.

“I am told by the person who is in charge of this, Carol Castle at the NY Opera Company, that he is ready vocally. And what he needs is experience on stage. Being the lead tenor,” she said.

He has been getting that experience.

“I’m a lyric tenor,” he said. “The roles are the same as Pavarotti sings. I’m not saying that I’m him. My voice isn’t that good.”

He is, however, performing some of those same roles and he has some favorites.

“La Boheme,” he said naming one of the most popular operas ever produced.

Some additional Italian opera is added to the list.

“I really enjoy Italian opera,” he said. But then he adds Mozart’s The Magic Flute to the list, a German opera.

“My palate is ever expanding,” he said.

La Traviata was on his list of favorites and when the Outer Banks Voice spoke to him he had rehearsed earlier in the day with his Violetta, Sarah Joyce Cooper.

“It went so well that they let us go two hours early,” he said.

First performed in 1853, the opera was scandalous for its time, pairing a pleasure seeking but dying courtesan, Violetta, with Alfredo—Tshombe Selby—who believes fervently in true love.

The couple fall in love and run off to the country. Enter Alfredo’s father, a powerful baron who sees nothing but ruinination in the relationship. He convinces Violetta to abandon Alfredo and heartbreak ensues.

“Tension drives it (the plot) along,” Selby said. “The real tension comes with the father and how this story is going to go down. It’s very relevant. Times change but people and stories don’t.”

The performance of La Traviata is free and is a gift from Elizabeth R and Company, the Meekins Trust, the Outer Banks Community Foundation, Bryan Cultural Series and others. Reservations for tickets may be made by calling Elizabeth R and Company at (252) 473-1061. Tickets will be available at First Flight High School on the night of the performance.