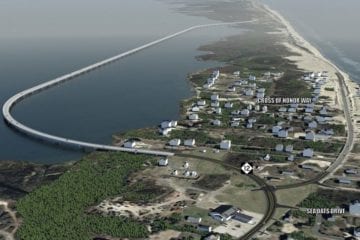 Computer simulation of how the bridge will look. (NCDOT)

The first piling has been driven into the ground in Rodanthe for the 2.4-mile Jug Handle Bridge that will eventually reroute N.C. 12 around an area that has been repeatedly washed out.

NCDOT Public Relations Officer Tim Haas confirmed construction crews began driving the first trestle pile around midday Thursday for the land-based portions of the bridge before continuing out into the open water. Based on the current schedule, the bridge is expected to open to traffic by late 2020.

The Jug Handle Bridge will stretch from the southern portion of the Pea Island National Wildlife Refuge to northern Rodanthe and will bypass the S-Turns section of N.C. Highway 12, which is highly susceptible to breaches during storms.

The bridge earned its “jug handle” moniker from its distinctive shape that juts out into the Pamlico Sound before reconnecting with N.C. 12 north of Rodanthe.

This design — which is also referred to as the preferred alternative — minimizes the impact to the Pea Island National Wildlife Refuge, the ocean shoreline and the community of Rodanthe while maintaining safe and reliable access, according to NCDOT.

NCDOT will also build a one-lane roundabout, as opposed to a traditional “T” type intersection at the end of the existing N.C. 12, and by the relocated N.C. 12 near the Pea Island National Wildlife Refuge. The concept was developed to provide a safer intersection with less potential conflict points — areas where drivers are crossing, merging or leaving a road.

Traffic will be maintained on N.C. 12 while the new bridge is being built, and once construction is complete, the existing roadway in the refuge will be removed, while the existing section of N.C 12 in Rodanthe will remain open to provide access to private properties.

The Jug Handle Bridge – along with the Captain Richard Etheridge Bridge on Pea Island, which was completed in the spring of 2018 – is considered part of Phase II of the Bonner Bridge Replacement Project.

The Island Free Press contributed to this report.