That’s no aircraft debris . . . that’s part of a SpaceX rocket 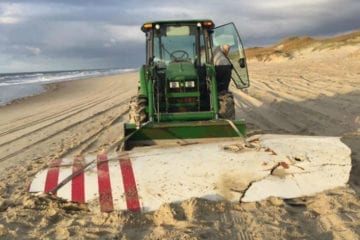 For the second time in a year, a piece of debris from a rocket launch on the Florida coast has washed up along the Outer Banks.

On Sunday, Angie and Chris Langdon first alerted us to the debris near Ramp 67 on Ocracoke Island.

Janille Turner of Ocracoke was the first to discover it washed up on Saturday, and sent us pictures Monday of the Park Service removing it from the beach.

SpaceX, the private space transportation services company founded by Elon Musk, confirmed Monday to Cape Hatteras National Seashore Chief Ranger Boone Vandzura that it was “hardware” from one of its rockets.

Last October, a 15-foot long section of a SpaceX rocket launched from Cape Canaveral washed up off Hatteras village.

A SpaceX spokesperson confirmed Tuesday that the debris is part of the fairing from their most recent launch from Florida on Sept. 10.

The first stage of the Falcon 9 successfully returned to Earth, landing on the “Of Course I Still Love You” droneship in the Atlantic Ocean.

The fairing covers the payload atop the rocket, protecting it while the stack streaks through the atmosphere.

The cover is then ejected after reaching the vacuum of space and drops back into the ocean.

“Thanks to the advances we’ve made in reusability, SpaceX is the only company capable of recovering our rocket boosters and spacecraft,” said company spokesperson James Gleeson.

Falcon 9 fairing halves deployed their parafoils and splashed down in the Pacific Ocean last week after the launch of Iridium-6/GRACE-FO. Closest half was ~50m from SpaceX’s recovery ship, Mr. Steven. https://t.co/JS7d5zTdIg pic.twitter.com/LjiTwnB4wd

“We have also been actively attempting to recover Falcon 9 payload fairings on the West Coast with our recovery vessel, Mr. Steven, which was recently upgraded with a four-times larger net,” Gleeson said. “No other company or space agency has ever attempted to recover a fairing before – it’s a very difficult challenge.”

The fairing section that washed ashore at Ocracoke was not intended to be recovered, and was not fitted with parachutes.

“SpaceX will continue to attempt fairing recovery in the future as we learn how to bring fairings back and reuse them,” Gleeson said. “All of which are important milestones on the road to full and rapid rocket reusability.”