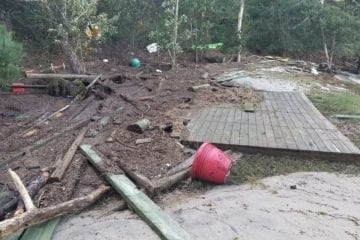 Sustained tropical storm force winds over a period of about eight hours caused very high water levels on soundfronts from Avon north, according to a report compiled by Dare County.

A total of 910 residential, 58 commercial and 11 public properties were affected by the storm in some way. Twelve properties suffered major damage, and 182 had minor damage.