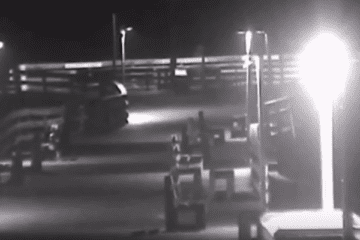 Legend has it a shadowy figure sometimes appears on Carolina beaches before hurricanes, a warning from the spirit world of impending danger.

He’s called the Gray Man and, if you believe maritime lore, he seems to favor Hatteras Island and Pawleys Island, S.C. He never speaks, just walks the beach, fading into the wind and sea spray upon approach.

Gray Man sightings date back to the early 1900s, and it’s said those who encounter him before a storm seem to be spared the worst.

Is it coincidence the Gray Man just might have been caught on a live web cam at Avalon Pier the night of Sept. 13?

Billy and Jim McClency of the YouTube channel “Ghost Guys Go” aren’t exactly real-life paranormal investigators, more like comedians spoofing on such shows. But a friend of the duo who evacuated for Hurricane Florence was watching live cam videos from the coast the night the storm hit, and spotted something at Avalon Pier in Kill Devil Hills.

At the very end of the 700-foot pier, wind howling, a figure can be seen walking from one side to the other.

“Our friend Scott sent us the Gray Man video,” Jim McClency said. “As far as we know it’s real, and the guy we spoke with at the pier said the same.”

The YouTube video has been viewed nearly 500,000 times, and received some attention in national and international news media. It also has a pretty big share of detractors, commenting that it’s double exposure, or a person walking inside the building and reflecting on the glass, or just a downright fake overall.

Employees at Avalon Pier took a look at the video this week and confirmed it was Avalon’s webcam. But was the ghost actually there? An optical illusion? Doctored? They couldn’t say, but did offer that they’ve never had any reports of ghosts or paranormal activity there.

The Gray Man may have made another appearance in the Carolinas earlier in the summer, this time at Pawleys Island, where a couple vacationing reportedly photographed him walking on another pier there. That image was taken in late July.

This is allegedly a photo of the Gray Man Ghost who, legend says, shows up prior to a devastating hurricane. Reports say he has recently made an appearance on the beach in Pawley's Island, SC! #HurricanceFlorence pic.twitter.com/xYI96TilQC

Where did the legend of the storied Gray Man get its start? There the mystery remains. According to the website NC Ghosts, Hatteras locals have said he may have been a sailor returning home who died at sea, or the ghost of George Pawley, Pawley Island’s original owner, or even perhaps Blackbeard the pirate.

Whatever his origins, the Gray Man lives on, at least in the imaginations of Carolina islanders who know to heed his warnings.