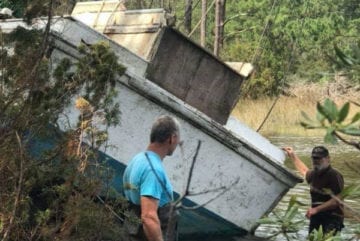 Dozens of boats were sunk or beached by Florence. (NCFA)

“This was the storm of a lifetime for many coastal communities. The damaging economic impact to the state’s fisheries was, and continues to be, significant. While state appropriations will begin to afford some limited initial relief, much more is needed,” Cooper wrote in the letter.

According to the state Division of Marine Fisheries, commercial fishing generated over $96 million in revenue in 2017, supporting hundreds of jobs and strengthening local economies.

The General Assembly funded just $1.6 million of that request to the Division of Marine Fisheries, to compensate commercial fishermen and shellfish harvesters for equipment and income loss.