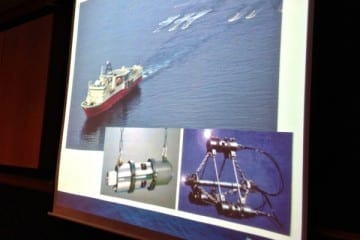 Airguns are towed behind ships. (Voice)

A coalition of environmental organizations has filed a lawsuit against the federal government challenging last month’s approval for five companies to test for offshore oil and gas reserves.

The group filed the lawsuit in a South Carolina courtroom Tuesday under the Marine Mammal Protection Act.

Authorizing five companies to simultaneously conduct seismic testing would disrupt the marine ecosystem and could seriously injure or kill whales and dolphins, including the critically endangered North Atlantic right whale, the plaintiffs contend.

In a statement, the plaintiffs, which include the North Carolina Coastal Federation and the Surfrider Foundation, say the government has estimated that seismic airgun blasting could harass or harm marine mammals like dolphins and whales — which depend on sound to feed, mate and communicate.

Another federal agency, the Bureau of Ocean Energy Management, would still have to issue permits to each company to conduct the testing, which involves towing arrays of airguns behind ships to send sound waves to the ocean floor to detect evidence of oil or natural gas reserves.

Governors and local counties and cities along the East Coast have also objected to offshore exploration and drilling.