Fishing Center operators say thanks for 45 years of memories 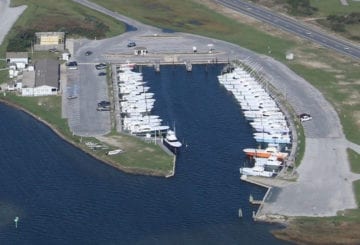 There will be a changing of the guard on the last day of 2018 at arguably the birthplace of modern charter boat fishing on the Outer Banks, when the group of stockholders operating the Oregon Inlet Fishing Center will give up the helm after 45 years.

Oregon Inlet Fishing Center Inc. was formed in 1973 as a shareholder-owned corporation made up of captains and boat owners that has operated the marina ever since.

After an extended lease expired in 2000, the concession contract with the Park Service had been extended on an annual basis ever since.

While a number of those legends have passed on to the “great grass line in the sky,” shares in the company have remained in many of their families.

Kenneth Brown, President of Oregon Inlet Fishing Center, Inc., submitted a two-page letter to the Outer Banks Voice to share the group’s thoughts on the end of an era.

For several weeks, there has been talk of the operations at the Oregon Inlet Fishing Center changing hands to new management.

The transition has now become reality and beginning on Dec. 31, 2018, the marina will be operated by Oregon Inlet Marinas, LLC, instead of Oregon Inlet Fishing Center, Inc.

At this time, the most important task of Oregon Inlet Fishing Center, Inc., is to express our appreciation to the customers over the past 45 years.

Our customers include two groups. The first group is the men and women that have worked at OIFC and called the marina home.

The second group is the general public that has visited OIFC through the years.

Originally, OIFC was formed by many of the charter captains that operated their charter business in the marina.

These captains started with a ditch in the marsh and created a marina known throughout the world.

Competition among the captains was a driving force in their success and a passion for fishing deeply embedded within each captain.

Often quoted from visiting captains to our area is the willingness to work together as a fleet to provide the best possible day for the charter.

This is a trademark that has been passed down from the beginning. Passion is something we are born with.

Over the years, the charger fleet at Oregon Inlet has racked up some impressive accomplishments: Tournament victories, record holders, inductees to the Saltwater Fishing Hall of Fame. The list goes on.

When asked, most of the fishermen know the success is measured daily with the satisfaction of the clients and the ability to compete with each other.

In the end, Oregon Inlet Fishing Center, Inc., is owned by stockholders, but the reputation for success belongs to the men and women that have worked here.

For those that may not know, Oregon Inlet Fishing Center is located within the Cape Hatteras National Seahore and is owned by the National Park Service.

This is a goal that Oregon Inlet Fishing Center has strived to reach through the years with special attention to the enjoyment, education and inspiration of the general public.

During this time, the marina has hosted thousands of visitors.

Many of our visitors have come simply to the docks and see their first tuna or admire the variety of locally-built custom boats in operation.

Regardless of the reason, Oregon Inlet Fishing Center has offered family and friends the opportunity to spend time together and make lasting memories.

We have seen our customers return year after year and measure success in their patronage.

Through the years, the park service has audited, inspected and evaluated Oregon Inlet Fishing Center, Inc., on an annual basis. Our scores have consistently been high, and we have met the requirements set by the park service.

Although we do not agree with the decision to change, all parties involved must move forward. The strongest asset at Oregon Inlet is the fleet, and for now that will not change.

We hope the customers of Oregon Inlet Fishing Center, Inc., will continue to experience all of the opportunites that we’re started so many years ago.

In a news release last week, the Park Service expressed its appreciation for Oregon Inlet Fishing Center, Inc. management of the marina for the last four decades.

“The Oregon Inlet Fishing Center and the talented captains docking at the marina have put Oregon Inlet on the map as one of the best offshore fishing destinations in the world,” said David Hallac, Superintendent National Parks of Eastern North Carolina.

A request for new lease proposals was announced this summer, with multiple entries submitted before the September deadline.

The proposal judged best under the selection criteria was given an opportunity to negotiate a final lease agreeable to both the selected applicant and the NPS.

Oregon Inlet Marinas is managed by Russell C. King, according to the National Park Service. An article of organization was filed on Friday with the N.C. Secretary of State, listing only Andrew W. Howle as organizer.

Details about others involved in the group have not been disclosed, and the new company has yet to put out a statement.

The Park Service said proposals were evaluated by an independent panel of experts in commercial services from parks and offices outside of Cape Hatteras National Seashore.

Selection was made by National Park Service Southeast Regional Director Bob Vogel, who was on the Outer Banks in mid-October for the opening of the renovated Wright Brothers National Memorial visitor center.

Stipulations in the request for proposals included continuing marina slip rentals and services for charter fishing boats, headboats and tour boats, and providing regular maintenance and upkeep of the marina and facilities.

The request also called for “improvements necessary to ensure that a safe, sustainable, environmentally sound, and resilient marina bulkhead, or equivalent shoreline stabilization project, is implemented to allow for marina operations throughout the term of the lease.”

Final details of the lease have not been disclosed, but the request for proposals called for a base rate of $40,000 annually, plus five percent of gross revenues. Every five years, the base rate would increase by 10 percent.

An offset of the base rate for Park Service-approved maintenance and improvements by the company leasing the marina was also offered in the proposal request.

During the final lease negotiations, multiple sources told The Outer Banks Voice the new company has plans to make extensive renovations to the facilities and add more on-site services in the immediate future.

It has not been announced if the new company will be retaining the current staff or continue to use the Oregon Inlet Fishing Center name.

But no matter what they plan to call what many know as simply “The Fishing Center” or “Oregon Inlet,” what started with Sam and Omie Tillett bumping their charters along in the back of a truck through the sand to reach a simple ditch will continue bringing joy to anglers and sightseers for generations to come.